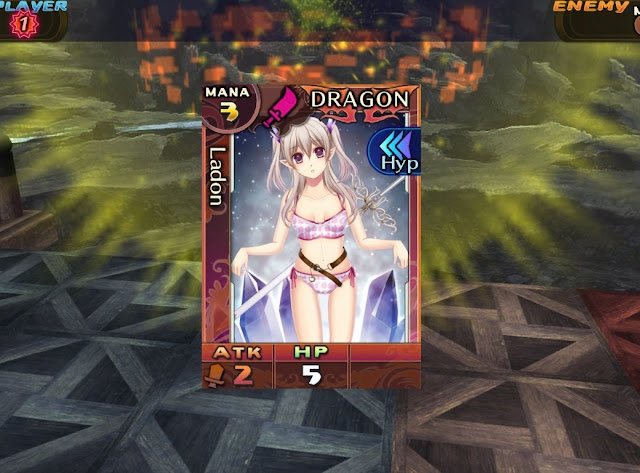 It’s so easy to dismiss Monster Monpiece as being a whole lot of fanservice. It certainly is a whole lot of fanservice, and I don’t think there’s another game out there that has as many panties, bras, and girls posed in compromising positions as this one. But to dismiss it on that grounds is going it a deep disservice, because Monster Monpiece also happens to be a brilliant little CCG.

Related reading: For a second take on Monster Monpiece, check out Clark’s review of the game here.

When it was originally released on the PlayStation Vita some years ago, the game enjoyed a period of infamy as one of its core mechanics involved a rather unique way to level up the cards that you’d have in your collection. Each card represents a monster girl, and to level them up, players needed to turn the PlayStation Vita on its side and rub both the front and rear touch screens rapidly in a motion that looks like, yes, that thing that men do. Do it well enough (and I’m not sure you want to admit you’re good at this minigame) and the girl’s card powers up, and the picture of the girl on the card will lose some clothes in the process. At card level 1, she’s basically fully dressed (provocative pose aside), but by the time she hit third or fourth level, she’d be right down to the skimpiest lingerie you could imagine.

Of course it was all outrageously silly, and made for one of the most outrageously perfect executions of Compile Heart’s oversexed sense of humour. Aside from the disappointment and cries of “censorship” that the near-naked “fourth level” art was removed from a handful of cards for the western release (in reality they were removed so Compile Heart could protect itself from potential fallouts in keeping the obligatory extreme youthful-looking lolita girls that appear in all Japanese otaku games dressed to a relative degree), fans got right on board with this nonsense, and regardless of where you sit with the game, one thing that’s undeniable was that it certainly offered a lot of personality. The art, anime pinup-style as it is, is also utterly gorgeous, and no developer in the industry does sexy anime girls quite as well as Compile Heart. 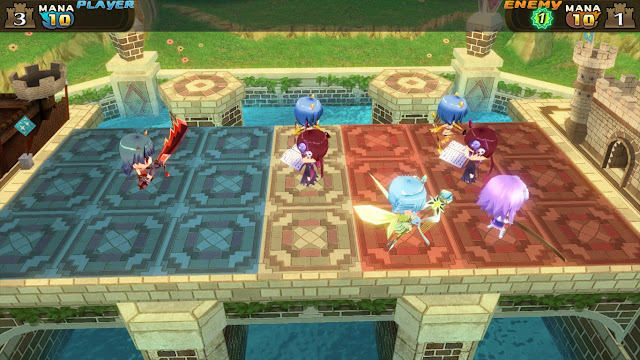 The PC release can’t have that rubbing minigame presented in the same way, of course, and this absence does detract a little from the raw humour that was meant to drive the stripping power-up minigame. Instead, you use your mouse and click or drag to poke, prod, or massage parts of the girls’ bodies to level them up instead. There’s a time limit each time to try and level a character up, and to be successful you need to find the girl’s sensitive spots and perform the relevant poke/pinch/rub motion that they like. Fill an energy meter in the time allowed and the girl will get more powerful, shedding some clothes in the process.

Because you’ll have a large deck of cards to play with (you can take up to 40 into battle each time), prepare to play this minigame an awful lot, as it’s not long before cards have to be levelled up in order to be able to match the power level of opponents. It does outwear its welcome, especially when it’s absence from that humorous context, and I must admit that I would have liked for Compile Heart to give us the option to skip that minigame after a couple of goes. Some of the girls had pleasure spots that were particularly difficult to find (just like in real life, hyuck hyuck), and that meant that I’d often have to play the same minigame with the same girl over and over again.

More than anything, this mechanic frustrated me because I just wanted to get on with the actual battling, which is incredibly strategic and well designed. Taking that deck of 40 nearly-naked girls, your goal in each battle is to do a certain amount of damage to your opponent’s “castle”, as represented on the play field. You do this by summoning girls to one of three “rows” of squares. Each turn, the girl will then move one “square” closer to the opponent’s castle, before finally damaging it if she reaches the final square before the castle. 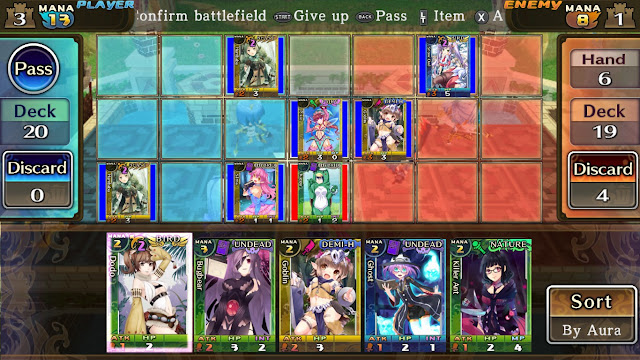 Of course, you’re able to block the advance of the enemy’s characters by summoning your own onto that same “line” on the field. When two characters meet in battle they’ll take turns attacking one another until one has taken enough damage to be knocked out and removed from play. Within this basic structure there’s a lot of variations to consider; some characters aren’t good fighters, but support front line warriors by either powering them up or healing damage done to them. Other characters do ranged damage. Some characters don’t move, but are amazingly effective “walls” to block enemies advancing on one of the rows. If you have two cards of the same in your team, you’re able to “fuse” them together on the battlefield to power them up. And so on and so forth.

What starts as a fairly straightforward tactics card game quickly becomes quite complex, and players need to carefully build their decks to balance powerful and weak cards (because the cost of summoning powerful characters means that you might be swarmed by the enemy being able to build far greater numbers of units), and attack and support cards. Cards are obtained through booster packs, as per any other CCG that you’ve ever played, and you’ll find yourself buying a lot of these boosters using the in-game currency in the hope that you’ll get just the right character to round out your strategy.

These mechanics are so well balanced and designed that I almost wish that Compile Heart didn’t waste the time with the pin-up art. The game’s narrative is quite limited and never really bothers to explain why girls need to strip down to their panties to power up. It actually starts to feel like the feature is thrown in there because the developer lacked the confidence in its systems to let the systems stand for themselves, and that’s a pity because the game’s systems are absolutely of a very high standard.

The other thing that’s really missing is the lack of multiplayer. While the main single player game offers more than enough content to justify the game’s price, CCGs are by nature social and I would have really liked some multiplatyer options to test out my decks – and strategies – with other players. It’s possible that the metagame would be unbalanced as there are cards that are clearly superior to other cards, and this kind of game is never going to have the mass-market appeal of something like Hearthstone, but I still would have liked to see Compile Heart try.

Related reading: This isn’t the only game in this series. Moe Chronicle, available in English as an import title for PlayStation Vita, is a dungeon crawler with the same premise and rubbing game. Matt’s import review.

That aside, this is an exceptional port of a hugely underrated game. The character art is one of the most critical features in the game, and on the much larger PC screen the art is vibrant, detailed, and attractive. This alone really makes Monster Monpiece’s PC port the definitive version. Hopefully this is not the last we see of Compile Heart producing CCGs.

Retro reflections: On my history with Nintendo handheld consoles