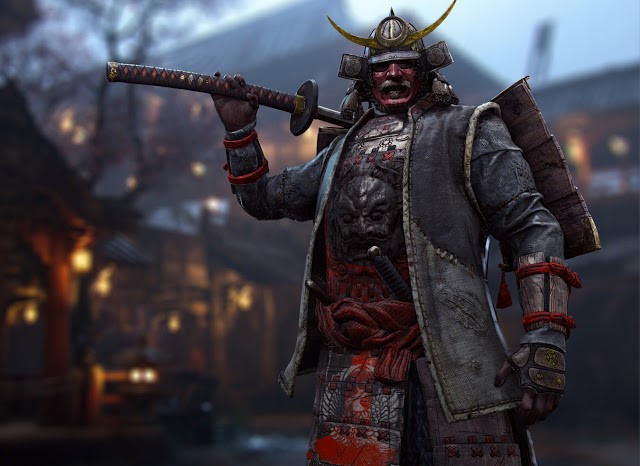 The premise of taking the addictive qualities that make online competitive shooters so popular and doing something unique with the medieval setting that replaces guns with swords and axes is a good one. A really good one. And there are a lot of really great ideas in For Honor that meant that overall I found the game an entertaining one. However, there are some fairly notable issues that hold Ubisoft’s newest IP back from being truly great as well.

The story that gives the endless combat that you’ll find in For Honor is pretty thin, but kudos to Ubisoft’s development teams for at least trying to come up with something of a feasible reason to bring together distinctive warriors from very different pats of the world and time. A great cataclysm has meant that vikings, samurai and knights have ended up scrapping over the tiny bits and pieces of what remains, and this means an unending war between them. That’s about it, but it’s a good pretense. After all, who doesn’t want to see who would win between a knight and a samurai? It’s been the subject of entertaining debates between military historians for years.

It is strongly recommended that your first steps are taken through the training mode, which unlocks you a good number of coins right off of the bat, which you’ll use to power yourself up and unlock additional warrior classes. Next up, you should work through the single player campaign, which is a dressed up tutorial. The story is broken up into the three factions, tasking you with guiding different characters through a variety of battles. This in turn introduces you to the different classes within each faction, and by the end of it you’ll have a base familiarity with how each and every character fights. 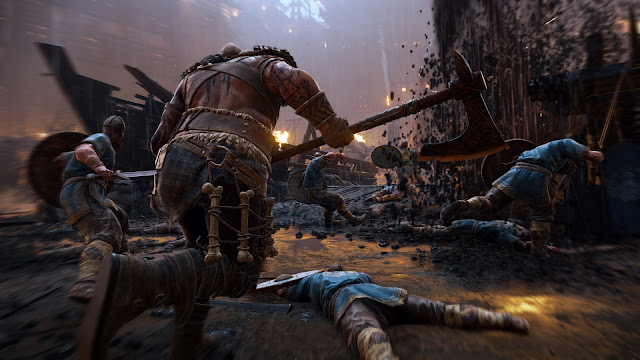 In some ways, this leads us to a strength of For Honor – but also one of its more peculiar weaknesses. The three disparate factions are similar enough to provide balance, but within each faction you have four different classes of character as well. Each faction has three main classes (vanguard, assassin and heavy) with a fourth hybrid class to each faction as well. There are differences in the classes from one faction to another. For example, you have the heavy class. The knights variant is the conqueror and their ball and chain weapon hits hard and is complimented by a shield that combine to create a slower, more tank-like experience than the nimble assassin class. However, the conqueror is just a little faster and slightly less durable than the samurai equivalent, the shugoki. The shugoki packs a devastating punch – when it lands. Personally, I cannot stand how slow they are, but they can take a hit and connecting with their club weapon can down an opponent in just a couple of heavy strikes. So, this variation within the ranks is handled well, even if the differences are often subtle – but they provide some much needed balance (though admittedly some classes do seem to get more play than others online – usually the very fast ones like the orochi from the samurai faction).

However, it seems odd that the factions mingle. With the very limited story you see in the beginning, the combat is meant to be samurai vs. knight vs. viking. When you first start playing, you align yourself with one of these factions as well. So when teams are formed that have a mix of fighters from all three, I found the whole concept behind the game to be quite pointless. When “vikings” and “samurai”, who are meant to be enemies, end up fighting on the same side, you have to wonder why Ubisoft bothered to come up with the factions at all.

Worse, these warriors all fight in essentially the same manner. Weapons and armour slightly differ from one to another, but the martial techniques and behaviours of each warrior is completely interchangeable. As a result, playing as a samurai starts to feel like you’re just playing as a knight in cosplay. This was likely done for the sake of balance (since, historically speaking, the vikings and their combat style would have had a terrible time against the armour of the knights, or the dazzling skill of the samurai), but it leaves the game feeling purposeless, pointless, and poorly researched. And don’t even get me started on how poor the research was that went into the samurai costumes… or indeed the presence of assassins, designed after the hashashin, fighting in the European knights faction. While no one will come into For Honor expecting a game of historical accuracy, rooting the game in some kind of real context is essential. That is, after all, how the historical games of Koei Tecmo work. Not accurate, but authentic. 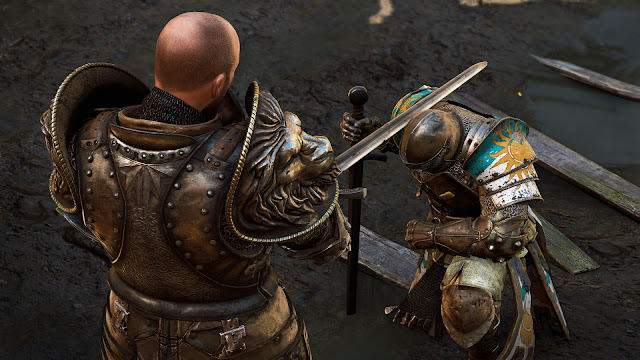 From a gameplay perspective, there are usually a few different modes to contend with. You have duels, capturing of regions and deathmatches that make up the bulk of the experience. During the story mode, these different ways of playing are baked into the narrative (such as in one of the early chapters where you are essentially tasked with ‘protecting’ a point – the point just happens to be a rolling battering ram, making it a combination domination mode/ escort quest). In a way similar to Titanfall or as we see in MOBAs like League of Legends, you have minor minions running about to basically serve as fodder/ distractions and add a nice sense of scale to the idea that these are in fact warring factions. There are also some leader-type characters that take a few extra whacks to take down, but generally are pretty easy. However, the meat of the combat revolves around duels with other warriors such as yourself.

Here For Honor breaks down into an interesting fighting game that has a sort of rock/paper/scissors quality to it. You use your left analogue stick to move about, a trigger button to focus on (or switch focus points) your enemy and then the right trigger/bumper buttons for your light and heavy attacks. The key to all of this is in the right stick, which impacts your stance. You can move it to either side or up, and this puts you into a defensive position but also indicates which direction your swing will come from. There are small indicators that show up on the screen and guide you to how your opponent is currently leaning, but as you get better at the game, it becomes a bit more of a chess match as you try to trick your opponent into leaning one way while striking from the other. It is a fun system that makes for some pretty amazing fights. These duels are easily the highlight of For Honor. Mowing down the minions is pretty repetitive, uninteresting work, and sometimes two or three of you will team up on one other hero and the battle is obviously going to be lopsided in that scenario. However, when you win one of those epic, long-lasting duels against an equally skilled opponent, there is an incredible sense of satisfaction that is For Honor at its best.

While the campaign is entertaining enough, once you complete it (and it only takes a handful of hours to do so), the real meat of For Honor is going to be found in the multiplayer. This is where Ubisoft expects For Honor to have staying power, but some curious design choices hold the title back from its fullest potential. First, the elephant in the room: why in the world did Ubisoft make this a peer-to-peer title instead of using dedicated servers? I am sure it saved some money in server space and maintenance, but I suspect it will cost far more goodwill than it should have. Connectivity is hugely hit and miss, and when too many people drop out (and rage quitting seems to happen a lot in my experience), the session can drop everyone and you fail to get a completion. I imagine this will be resolved sooner than later, but as of my writing I complete less than half of my matches against actual players. My Internet connection is solid, I have an open NAT, but no matter how good my connection is, my experience is held hostage to some degree by the others who are playing, and that is a shame. 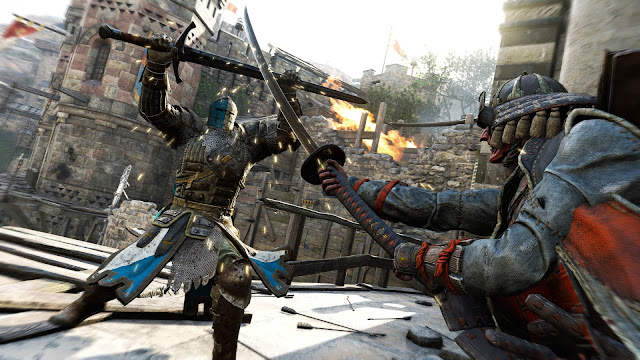 Thankfully there is a player versus AI bot option as well, and obviously bots don’t rage quit. Still, some corner cutting with the backend support demonstrates a lack of confidence by Ubisoft in this new IP, which is a shame because For Honor has a lot of potential in how it dangles carrots that kept me coming back for more. I liked the contracts and the minor objectives I could complete to earn extra coins. There is a persistent world that is broken up into seasons with rewards for the winners (it sort of reminds me of Grand Kingdom in that sense, since you are jumping in and out of the fray until the season ends).

It is worth noting that there are a lot of microtransaction opportunities in this game, and a season pass that is two-thirds the price of the full game. I haven’t made use of any of those purchases, which makes For Honor a bit more of a grind if you want to unlock new patterns and gear for further customising your characters. To that end, For Honor is pretty cool, with some fairly deep customisation options for your characters. However, the prevalence of these microtransactions will undoubtedly rub some people the wrong way.

For Honor takes some risks and creates a new property that I’d love to see more of in the future. Unfortunately, there is this impression that perhaps Ubisoft was not entirely confident in this first outing. The online modes are fun enough, but they can get grindy and their lack of depth begins to show after a time. This when coupled with the lack of dedicated servers leaves For Honor feeling somewhat incomplete, despite some beautiful environments and engaging combat.