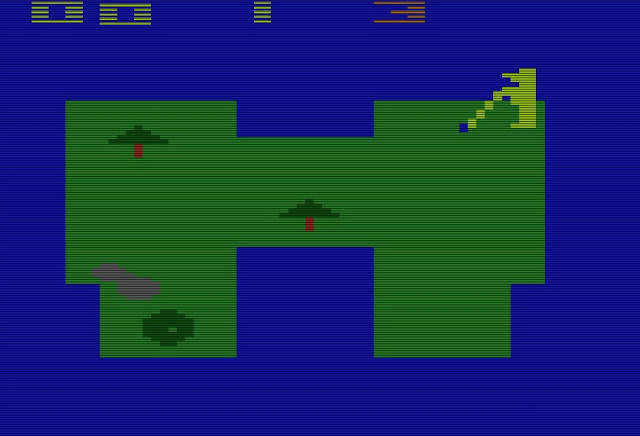 Imagine being a kid on Christmas day a couple of decades ago; 1977, to be precise (or think back to then if you were indeed around then). The big day had rolled around. Under the tree was a box that you had been drooling over weeks. You knew what it was from its shape; a brand, spanking new toy; the Atari 2600. This thing would let you play games on your TV! How absolutely incredible is that! On top of that, the tree also had a smaller box wrapped up that you just knew was a game to actually play on your new console. That game was going to have to last you for months until your birthday rolled around and you could ask for another game for the gift, and you just couldn’t wait to tear it open and see what game it was.

Then on Christmas you discover that the game was Basic Math. A “game” that gives you addition, subtraction, multiplication and division problems to solve, and then challenges you to get ten in a row right. Incredible, right?

And now, thanks to the Atari Flashback Classics (split into two volumes), you can relive the utter thrill of what once passed as cutting-edge gaming. If nothing else it’s fascinating to see just how far this industry has really come in just a few short decades. As much as we argue over whether gaming narrative, art, and artistry are progressing they way they should be, sometimes it is worth looking back at what people used to consider the pinnacle of gaming with to remind ourselves of just how good we have it today.

This should be an eSport cause I got a perfect. #PS4sharehttps://t.co/XQOUN4U7xl pic.twitter.com/fmvT839acY

The two Atari Flashback Classics compilations are packages of games from before yesteryear; the most primitive of primitive home console games in the stuff that used to be the rage on those old Atari 2600s. Each collection also has a few arcade titles thrown in to show what passed for real production values, back when people would actually go to arcades because they provided a superior experience to what could be had at home. There’s a lot of games in the collections; 50 in each, and that means for the truly hardcore, there are 100 Atari games to stick on your PlayStation 4. For the purposes of the review I’ve covered the second anthology, but aside from the list of games, both versions are exactly the same, so if you are going to pick only one of these up, go with whatever one has the more interesting game list to you.

It has to be said from the outset that while there are indeed a lot of games in the package, very, very, very few games that appeared on the Atari 2600 have aged well at all. I don’t say that to criticise the people that make them; the architecture of the 2600 meant that these developers were working with mere bytes of information. Not megabytes. Not even kilobytes. Bytes. Bytes and tiny few colours, and a soundchip that was barely able to play sounds at all. It’s incredible that games were even possible at all on this thing, and the people that actually made these games worked some technical magic. Hell, you could make a strong argument that their ability to work with severe limitations actually makes them better developers than the people today who are only inhibited by their imagination. But that’s a very academic argument. What is a basic fact that stuff like Basic Maths and a 3-a-side football game where all three players move in unison are so simplistic and so abstracted that they could barely be called playable.

With that being said, there are some classics that remain timeless today. Asteroids is one of the truly great “old games,” and the package even throws in the original arcade game to go with the 2600 version so you can enjoy the classic at its finest. Crystal Castles is a curious Pac-Man clone, and again you get both Atari 2600 and arcade versions to enjoy here. There are old adventure games, one of the earliest examples of a space simulator (there’s even some depth to that one), a surprisingly decent game of chess, Missile Command (and who doesn’t like Missile Command?) and Red Baron, which was an early wireframe dogfighting game that is actually quite good fun to this day.

So you’re going to need to have a seriously nostalgic urge to want these packages, but once you actually start playing, you’ll find the variety of games on offer is truly impressive and comprehensive. A lot of care has gone into the anthologies to balance the “playlists” and truly represent what this console was capable of, back in the day. The curators of the packages have gone as far as to include online leaderboards, which certainly helps add some longevity to people that like that challenge, as well as complete scans of each and every game manual. Remember game manuals? I sure do. I miss not getting those in my games, back when the manual was used to complement what was in the game, rather than just explain to players how to press the buttons.

There’s also plenty of options to enhance the realism of the games, or alternatively smooth them out so they’re a little more tolerable by today’s standards. In other words you can choose to emulate the effect of playing on an old, flickering CRT, or alternatively you can clean up the art so that it displays clearly on modern TVs. It’s little touches like that, that really enhance the value of the package; I feel nostalgia for old games as keenly as anyone else who has been playing them for their entire lives, but by the same token I do so struggle to stare at that “CRT effect”. With these packages, I want to play the game, not be reminded of the reasons that I think games are better now.

I think it’s also useful to look at this package as a bit of history that explains a number of things; it explains why Atari was a force that faded, because unlike the likes of Space Invaders, Pac-Man, Mario and Sonic, the kinds of games that Atari produced lacked that strong sense of character and personality; the games on the 2600 were for the most part functional, rather than artistic, and while that means they’re simply as not as enjoyable as something like Super Mario Bros. is today, the’re still a lot of historical merit in unpacking what these games did, how they worked, and how people played games back in those days.

Some peeps play FIFA on PS4. But me? I go hardcore++++ #PS4share pic.twitter.com/oUEYRfwCdF

Unlike Nintendo’s Mini NES retro console that was released last year, this is a more difficult package to recommend to people that didn’t grow up playing the games. I don’t think there’s been a better effort to archive the games on the Atari 2600 and bring them to modern players, but I just don’t think the people used to complex worlds, storytelling and gameplay that we have today will understand the value of these older games. But older players may well get a kick out of playing Basic Math again, to remind them of just how hard it was to act out excitement on that Christmas day when their parents thought they had found the perfect gift.