Good news for people who have Hatsune Miku: Future Tone and 220 songs is just not enough; now there’s even more, with SEGA releasing the first DLC pack, containing extra costumes and music tracks. 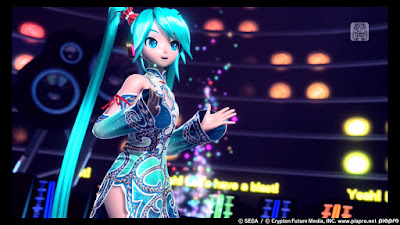 The DLC pack will set you back about $10 USD, and contains four extra songs as well as a host of different costumes to dress the characters up in. The four music tracks are truly awesome:

Meanwhile, the additional costumes have one particular stand-out: Miku’s Emerald Chinese-style dress, which will forever be the best costume ever.

This is the first of three DLC packs that SEGA will release for Future Tone. If you’re keen to pay upfront, you can buy the season pass and get about $5 off the cost of buying each pack individually.

For all those who drool over Idea Factory’s games but need to wait for a PC release — AKA me, myself, and I — this news is certain to brighten your day. Fairy Fencer F: Advent Dark Force is set to launch worldwide on PC this Valentine’s Day, February 14. The release includes English, Japanese, and Chinese subtitles. For more information on the game, you can peek at an early PS4 trailer here:

Advent Dark Force has three separate story paths to take: the Goddess story, the Vile God story, and the Evil Goddess story. Each story has multiple endings, upping the content even further. The number three is the key here, as there are also three modes (easy, normal, hard). Your party can contain up to six members, and each can hold fully customizable weapons. A deluxe pack can also be purchased for $5.99 USD; it includes two digital art books (character collection and concept art), six mobile wallpapers, and five PC wallpapers.

PM Studios and Acttil have announced a digital-only release this spring, in both North America and Europe, for Deemo: The Last Recital on PlayStation Vita.

The rhythm game Deemo was developed by Rayark Games (known for the Cytus series, also a rhythm game) and originally released for iOS and Android, where it was downloaded over five million times. It follows a “heart-wrenching, urban fantasy story brought to life with gorgeous hand-drawn artwork” and “beautiful piano melodies.”

The game includes the original Deemo 2.0 story, voiced by Taketatsu Ayana with English subtitles, a new duel as well as duet mode both of which enable players to battle via ad-hoc, and a PS Vita exclusive “After Story” scenario.

Puyo Puyo Tetris. Oh boy, are we ever excited for Puyo Puyo to collide with Tetris to hopefully create the ultimate puzzle game. Sega has announced that the mash-up will be released on April 25 for the PlayStation 4 and Nintendo Switch. In case you missed the original announcement (in which case, welcome back to the world and use past Catch-ups to, well, catch up!) or you just need a puzzle fix, feast your eyes upon the Switch trailer:

It’s important to note the way Sega will be releasing the game. Puyo Puyo Tetris will only receive a physical release on the PS4, with a price set at $29.99 USD. For the Switch the same price has been set for its digital version, whereas it will cost an extra $10 for a physical copy.

Hands on with Project Cars 2: Vroom vroom I’m in love