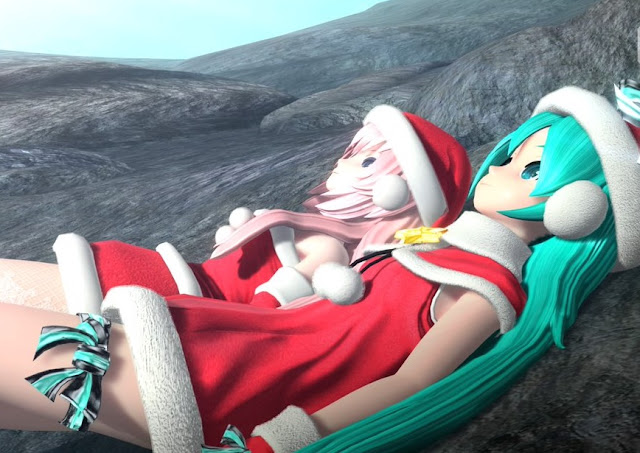 Next week the first major game of the year is released; Hatsune Miku: Project Diva Future Tone! Some of us already have the game from its Japanese release last year, but for those who didn’t want to go through the effort of setting up a Japanese PlayStation Network account, or deal with the Japanese menus and so on, here’s your chance to get the game in your native language.

The thing about Future Tone, and the reason that it’s the best darned rhythm game ever made, is that it has no fewer than 220 different music tracks to play. That’s an awful lot of gameplay. A rough calculation puts it at around 40 hours of gameplay just to play through all those tracks on each difficulty setting. And actually wading through those menus to find tracks to try can be a tiring process.

That’s where this week’s list comes in! Here’s ten tracks to beeline to when you’ve picked up the game that will give you and idea of the breadth of what’s on offer; there’s a big range of music, and just about everyone should be able to find something that appeals to them.

As the name of this track suggests, this is one very sweet little song. Light and cheerful, it’s a bubblegum pop ballad, with a gentle melody and simple beat. It’s quite a simple beat, too, which greatly helps in playing along to the rhythm game; if there’s one perfect on each difficulty level that’s obtainable without a lot of experience with Miku music, I’d suggest it’s this one. I found it easy, at any rate. The video clip isn’t too overbearing too, making it easier to concentrate on the actual gameplay.

Of course you can’t make a Project Diva track list without mentioning one of the all-time Miku classics. Romeo & Cinderella is a more rock-like beat, though still very poppy and fun, with some rather… interesting lyrics if you look at the English translation. It also has a really good video clip, which doesn’t make scoring well at the game much easier, but it’s a definite highlight. This is a difficult track, so actually getting perfects will take some practice. Settle in for the long haul.

I should note from the outset that this is a particularly difficult song to actually do well in, so I’m not recommending it on that ground. It is, however, a very good video clip, and it’s one of the few songs by Kagamine Len that I like. It’s also got a sound all of its own, and is another good example of the kind of variety that you’ll be getting out of this game.

Okay so there’s another Len song I’d recommend; one of the ones where he performs with his twin, Rin. To Beyond a Duodecillion is a really rocky fun track and it’s a really, really good one for getting into Project Diva. The beat is clear and defined and the choreography of the button presses to go with the music is spot on. It’s not the easiest of the game’s tracks, but your fingers will be dancing across the controller in playing it in such a way that is very addictive and entertaining.

I like a lot of what people do with MEIKO’s voice; it suits a more 80’s style disco-pop music, and Change Me is probably the best example of this. If you want a track that will show you how bright and cheerful the music can get, this is a good one to go with.

Luka’s classic jazzy track is a lot of fun, and comes with one of the better music videos in Future Tone. Even if you’re not up for playing the game, sticking the video on in the background is a good way to admire just what people have been able to do with the vocaloids; this has all the production values of the kind of music clip that you might expect to see on TV, complete with interesting dance choreography, and a well designed track around the voice.

Ashes to Ashes is a darker, gothic-style track, as suits KAITO’s voice. This is also, without question, the easiest track in terms of gameplay to master. If you’re ever struggling to complete a track, come back to this one and make yourself feel better by nailing the hard, if not extreme, difficulty.

Of all the Rin tracks, I recommend this one first up. Like some of the others above, it’s a fairly easy track by Future Tone’s standards, making it a good introduction to the game that won’t be so intimidating. But equally the song itself is lovely and lyrical in style. Smooth and elegant, Kokoro is quite poetic and mature, and shows yet another musical facet that producers can achieve with these “instruments”

Summer Idol is a glorious throwback to Beach Boys-style sunshine pop music. A sunny, bright duet between Miku and Rin, Summer Idol is more than a legitimate excuse to dress Miku up in swimwear (not that I ever need an excuse, but you know), and of all the Project Diva tracks, this is probably the one that I’ve watched, with the gameplay itself turned off, the most. It’s fun and chilled, and it’s a really good introduction to just how entertaining this game can be.

The final track I’ll recommend is a bit of a personal choice, but I think it’s delightful. Multiple Future Quartet is so light and charming it can’t possibly be disliked, and of the 220 odd tracks in the game, I’ve got to say that this one stands out for me as the one that has the best “choreography” with regards to the gameplay. There’s something about the rhythms of the track that allow it to be subtly reinforced by the button presses, means that as you play this one you really do feel like you’re playing an instrument along with the performance.

After playing through through these tracks you’ll then be comfortable with the kind of game that Future Tone is and what it offers. Your next step then will be to go off and find your own favourite tracks. There are 220 of them, after all… happy Mikuing!