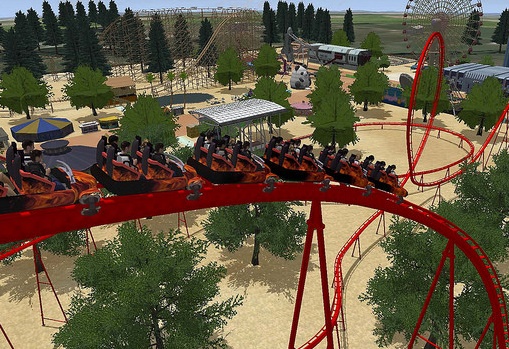 Rollercoaster Dreams is right up there with the worst games that I have ever had the displeasure of playing. I think it has its heart in the right place, but there’s not a thing about it that’s remotely competent to make it worth anyone’s time.

The basic game is a theme park business simulator, like RollerCoaster Tycoon, but in this one you have the added ability to visit and explore your own park. And in VR, no less! This is, of course, a brilliant idea, because who wouldn’t want to experience a theme park they built for themselves? It’s a feature I wish was in more simulators. On the Nintendo 3DS there’s a transport simulator, A-Train, that lets you ride on the trains and buses that you put into cities, and it’s immensely rewarding to see your work put into practice.

That would be the case with Rollercoaster Dreams too, if the thing we created wasn’t so completely ugly. It’s quite one thing for a game to look simple; A-Train was simple. RollerCoaster Tycoon is simple. Rollercoaster Dreams is a game that is outright broken, aesthetically. Rides barely look like rides, textures are an ugly mess, and when you do drop down into your park, you’d be lucky to see three or four other people in it. There is no correlation between the number of visitors a park supposedly has, and the number that you see on the screen in front of you, whether you’re in “sim” mode building the park, or on the ground exploring it for yourself.

Someone had way too much time to waste making this in a woeful game. #PS4share https://t.co/I8TA4wK0AA pic.twitter.com/lbSDH2DGaO

In both circumstances, the lack of visual feedback is a real issue. As you’re building the park you’ll have no idea just how successful your park is, which rides are popular, and where profit holes are in it. RollerCoaster Tycoon showed players exactly how long the lines were for the most popular rides, and where the people were congregating in the pack. Here there’s nothing, and the only way to get information about the success of a ride is by manually selecting each one, at which point it provides only abstracted data to try and sort through. And then the horrible layout of the user interface and the presentation of the data that makes it a headache to work though.

Then you’ll drop into your park to wander around, and the complete lack of a crowd ruins the atmosphere completely. There’s no fun in your parks, no matter how well you design them. There’s just a scattering of people wandering around, and they exhibit no personality or character. It’s sterile, boring, and will make you wonder why you even bothered wasting precious minutes of your life building this thing.

You’re able to ride the rides too, which in theory would be a really cool idea, especially since some of the rides are actually minigames that you have control over, but in practice these minigames are broken messes that don’t really work at all. To cap it all off, you’re meant to experience this all through the magic of VR. I really, truly recommend that you do not do this. I’m only (very) rarely affected by VR; Drive Club, Eve, Battlezone, Miku, and all the sedate VR experiences are games I can play for hours and hours without needing to take the headset off. With RollerCoaster Dreams I felt an overwhelming need to vomit, violently, about a minute after putting the headset on. And that’s before I even got on one of the virtual rollercoasters. Just don’t do it (though by now you should realise you shouldn’t actually buy the game anyway).

Guys my park is so awesome I have ONE visitor. This is one of the worst games ever #PS4share https://t.co/I8TA4wK0AA pic.twitter.com/nKeDOLdfLE

Capping off a truly woeful effort at game development is the utterly broken English that you have to wade through. The game is utterly littered with poor sentence structure, misspellings and grammatical errors. You’ll head into the facilities menu to buy some shops for your park and there you’ll see a “Gods shop”. As much as I think it would be awesome to have a shop for the gods in my theme park, I think the translators missed an “o” in there. I jest, of course, because this game almost certainly didn’t have a translation team. It’s a Google translate job at best. And while I appreciate that the developers would want their game available in as many locations as possible, translating them into native languages properly is a basic gesture of respect if you’re asking people to then spend money on your game.

Related reading: For people with PCs, Planet Coaster is another really good choice.

One of the most odd features within the game of all is the ability to visit other player’s online parks. In this mode you obviously can’t manage the park, but you can walk around it, and ride on the rides that the player has put down. This feature is not odd because it’s a bad idea; it makes sense to share your parks with other players. It’s odd because there are some parks online that have clearly had a lot of effort and time put into them. It’s utterly wasted time and effort; it’s still an ugly as sin park with no atmosphere, but there are clearly people out there with far too much time on their hands. Actually seeing people put effort into this game is genuinely surreal.

I appreciate everything that the developers were trying to achieve with Rollercoaster Dreams, but this game should be a real lesson in working within your means. The best, most well-resourced developers in the world would struggle to make a quality simulation game with online sharing, VR support, and the ability to fully explore and interact with your creations. This is the work of a small indie developer that should have focused on getting a few things right, than throwing in everything and failing at it all.

The Friday Ten: The first ten tracks to play when you pick up Hatsune Miku: Project Diva Future Tone next week