The game follows an original story that is different from the original work and anime, called “Another Episode with the Candidates for Next Ruler.”

The story sees a “Beauty Queen Election” carried out as a prelude to the “Next Ruler Election”. But the victory prize, a treasure said to bring good luck, is in fact cursed and afflicts Subaru with the “Curse of Death.” The only way to lift the curse is a kiss from a beautiful girl – leading to the inevitable socialising with the heroines in hopes of garnering a kiss and thus escaping Subaru’s fate of death.

And hey, these girls are gorgeous, so we’re all good with this. Fingers crossed one of the increasing number of visual novel localisers snaps it up. 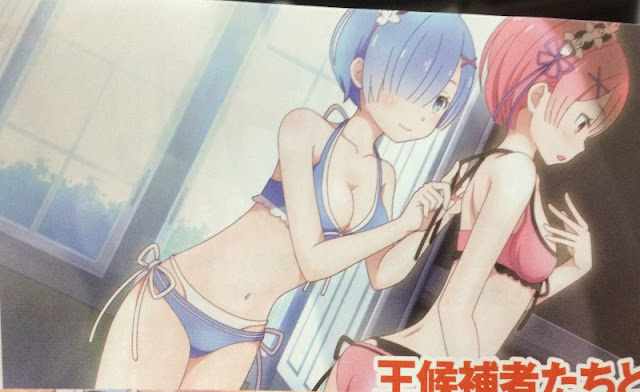 Mistwalker president and Final Fantasy creator, Hironobu Sakaguchi, has been rather vague on his upcoming projects, but in an interview with 4Gamer (translated by DualShockers) he mentioned that he is planning to reveal his new project this year – though he did not share any specifics about the game (assuming it is a game) itself or an anticipated release.

We know that Sakaguchi-san has been working on a console version of his successful mobile JRPG Terra Battle ever since the download count surpassed the 2 million download milestone, and we recently heard that development has been progressing, but the road to completion is “steep.”

Mistwalker (Blue Dragon, Lost Odyssey, The Last Story) also announced a technology partnership with Silicon Studio (Bravely Default) for a new project back in February 2016. The only concrete item revealed in connection with this project was the piece of concept art from artist Kimihiko Fujisaka, below, which was first published in 2009. Intriguingly, this image also appears on the Terra Battle website.

Whether these two projects are linked, or even identical, we cannot determine at this stage.

In addition, Sakaguchi has also spoken about opening a new “development-type” company; however, this sounds too vague to us at this point to be considered the likely new project.

DDNet will keep a close eye on further Mistwalker news and we’ll be sure to report anything significant in our regularly updated news.

Sekai Project recently announced that two of its games would be coming to Sony consoles. The first, Fault Milestone One, will be released for both PlayStation 4 and PlayStation Vita.

The Fault franchise is a series of is an episodic visual novels series created by doujin (aka indie) developer ALICE IN DISSONANCE. Episodes are called “milestones” and usually are about four to six hours in length.


According to Sekai Project “unlike traditional visual novels, Root Double does not have clear cut ‘choices,’ but rather, the game uses the Senses Sympathy System (SSS) to allow the player to manipulate the story based purely upon emotion. Your emotions projected upon the characters, particularly your trust in them, shape the progression of the story.”

Both Fault Milestone One and Root Double: Before Crime After Days Xtend Edition will be available digitally via the PlayStation Store in the first quarter of the year.

Sekai Project indicates that several more console releases are planned throughout the year, with details to follow rapidly after the release of the first two titles, as well as some surprises lurking in the shadows. Sadly, we don’t think that this will include some of Sekai’s rather excellent adult visual novels. Sony probably hasn’t relaxed its stance on those yet.

Due for release on Janurary 29 and 30th (the second release date is for a Steam port), the game is promising to be a classic game, right out of the 80s, and has various key members of the 1987 original Double Dragon back to ensure that this (all new) game stays true to the series.

That’s right, rather than try and update the classic formula, this one is going all-retro, and will be priced at a rate that will be absolutely exciting to fans; it’s going to set you back just 800 yen, which will be around $10 in our western monies.

In related news, Double Dragon is 30 years old this year. If that doesn’t those of us who remember dropping quarters into the original machines feel old, nothing will.

Related reading: Here’s a review of an recent modernisation attempt for Double Dragon.