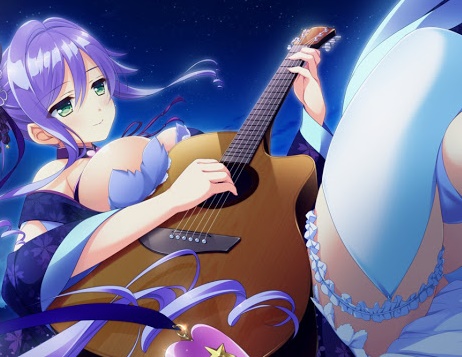 This generalised derision is bizarre for a few reasons. Firstly, there’s nothing wrong with pure titillation (have you heard of a thing called pornography? I hear it’s quite popular). Secondly, things can be flawed – even sexist – and still have value (Everything from Shakespeare through to The Rolling Stones proves that point). Thirdly, and perhaps most importantly, the perception of “pervy anime games” is groundless; even the most lewd games can have a lot more to them if you can stop fixating on anime tiddies.

LoveKami: Divinity Stage is a great example of that last point. It’s an unashamedly bawdy game full of panty-shots, comically revealing costumes, boob jiggle physics, and other such fan-service. It’s also an utterly adorable romantic comedy that’s surprisingly moving, with characters who feel incredibly human despite their comical proportions. It even manages to offer a brief but insightful look at Japan’s idol culture, and touches on the complicated sociology of sex appeal. It’s a sexy game, undoubtedly, but to write it off as just titillation would be a grave oversimplification. 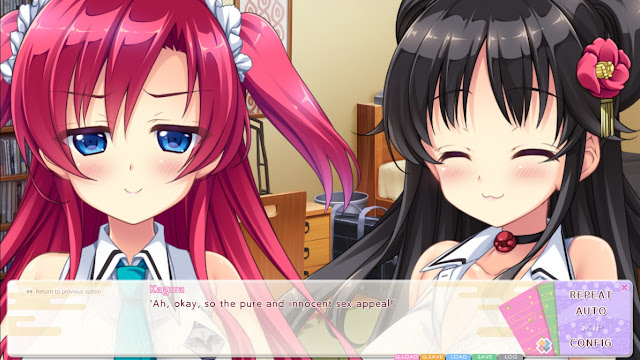 The basic premise of the game is that goddesses have come to Earth in search of worshippers. For many of them, that means become an idol – what better way to gather followers in modern-day Japan? As such, a culture of “Divine Idols” has sprung up, and none are more popular than the members of L☆SEVEN. Protagonist Yamato hasn’t really caught the Divine Idol hype, but that changes when he’s roped into helping two aspiring idols, Shuri and Kagura, who are taking part in a contest to find L☆SEVEN’s new member. To complicate matters, he’s long been friends with L☆SEVEN’s superstar Sara Benzaiten, who’ll be among the judges for the competition.

You can guess what happens next: through plenty of sexy misadventures and awkward encounters, Yamato gets closer to Shuri, Kagura, and Sara, and eventually ends up dating one of them. That’s where the heart of LoveKami really lies; despite being goddesses, they’re very human in their personalities and face very human struggles, making the romances all the more heartfelt and cute.

Kagura is easygoing and full of life. She’s not really that interested in actually joining L☆SEVEN, but loves bringing joy to people through her performances and thought the competition seemed like. She flaunts her sexuality without shame or care, and is as likely as not to strip down to nothing during a performance. At the same time, she struggles with an image problem – she’s seen as a bimbo with nothing to offer but sex appeal, with (mostly male) fans obsessing over her boobs. 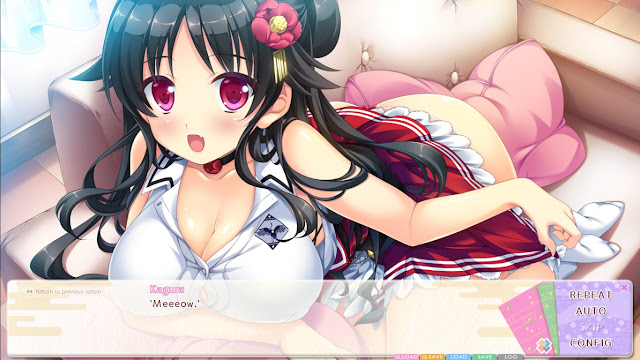 In a lot of ways, she’s symbolic of these “pervy anime games” as a whole. She celebrates and embraces her sexuality, which is a wonderful thing, but people can’t see past her breasts to what’s in her heart. As such, she’s caught in an awkward position between Madonna and Whore: she wants to be taken seriously, but she doesn’t want to sacrifice that sexuality that’s such an important part of her being.

Shuri is the polar opposite of Kagura. Shy and easily embarrassed, she doesn’t really seem cut out to be a Divine Idol. She loves singing, though, and wants nothing more than to step out of the shadow of her overprotective big sister, another member of L☆SEVEN. She’ll stop at nothing to prove that she can make it, but struggles to let people in – even if they’re people who can help her. Shuri shows a very different, much more subdued sort of sexuality to Kagura. Frankly, it comes across as creepy initially, when she seems reluctant to do stuff but goes through with it anyway because “that’s what boys like”, but this does blossom into something much more empowered as she finds her lane.

Sara is, I think, the most interesting of the three. She’s one of the most famous people in the country, and lives with all the joys and burdens that come with that. She loves bringing excitement and happiness to people as a Divine Idol, Sometimes she just wants to be Sara, the person, rather than Sara, the leader of L☆SEVEN. Sara’s sexuality is elegant and untouchable, as you’d expect from someone in her position, but she’s also innocent and inexperienced. She’s a famous idol, and sexiness is part of the package that’s sold to fans, but it’s also prevented her from really exploring her sexuality on her own terms. 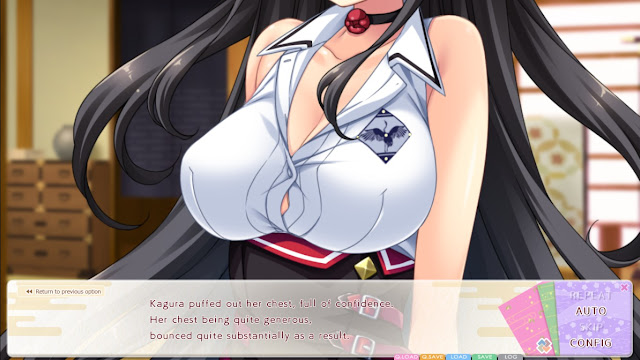 As serious as that all sounds, LoveKami doesn’t really dive too deep into any of those ideas. For the most part, it’s a lighthearted affair, full of playful banter and moments that had me literally laughing out loud. The art contributes a lot to this. Put simply, it’s stunning – it’s crisp, colourful, and full of life in that uniquely anime way. What really sets it apart, though, is the EMOTE engine that gives 2D portraits a full suite of animations. Characters retain their hand-drawn charm, but they emote in an almost lifelike fashion.

Those animations also include bouncing boobs, of course – this is an ecchi game, after all. In saying that, those suggestive elements, lewd as they are, are as playful as the rest of the game. Kagura and Sara take a lot of fun teasing Yamato with their “charms”, and the game never misses an opportunity for some sort of cheeky pun. It’s a bawdy game that has fun with its premise in a way that’s rarely exploitative or mean-spirited.

That said, it does go too far at times. One scene in particular stands out for its tone-deaf focus on a girl’s panties at a time when she’s at her most emotionally vulnerable – what should have been a really heartfelt moment in the game just ended up feeling creepy. 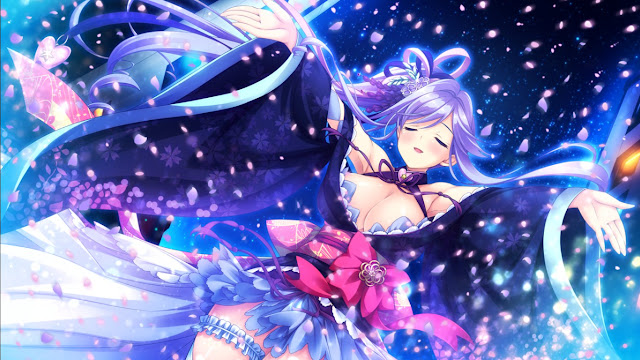 One thing worth noting is that LoveKami isn’t particularly “gamey”, even by visual novel standards. It’s a strictly linear game with a single choice around the halfway mark, which then sets it on one of three different routes, one each for Shuri, Kagura, and Sara. I don’t think it hurts the game at all – in fact, I appreciated the focus on character development and straightforward storytelling.

Related reading: On pin-up art and whether it’s objectification or not.

I don’t think a couple more branching points would have gone amiss, but even as a strictly linear visual novel, LoveKami -Divinity Stage- is a great game. It touches on some serious themes around idol culture and sexuality, but mostly, it’s just a cute, sexy romantic comedy to get the heart pumping.