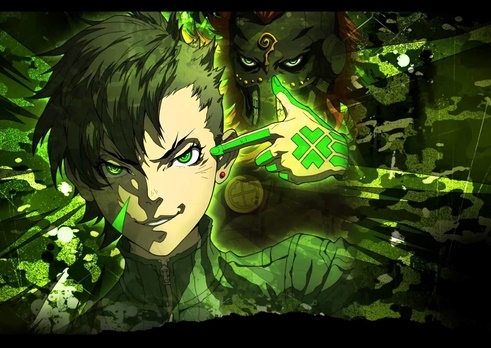 I don’t really understand the logic of having Shin Megami Tensei games on Nintendo 3DS. Here we have an incredibly dark, violent, adult series on a console best suited to uber-cute chibi characters and bright colours. That’s not designed as an insult to the console, but rather a reflection on what it does do well. Because the resolution of the screen is low, big bobble-headed characters look better on it than more realistically proportioned characters, where you can’t see details on their faces courtesy of the resolution. Also, because of that resolution, bright, bold lines and colours suit it better than darker and more nuanced tones.

Related reading: It’s not essential to have played this game’s predecessor, SMT IV, but it can’t hurt, either. Nick’s review of that game.

The sad reality is that the choice of hardware is simply not up to the vision of SMT IV: Apocalypse. This is a powerful game, with powerful themes and it desperately deserves to be played, yet I can’t help but wish it was on PlayStation 4 or Xbox One instead, where that vision for a brutal apocalypse could be properly realised.

As the title suggests, Tokyo in the world of SMT IV is a desolate and destitute place. A nuclear catastrophe threatened the existence of the entire planet, but using powerful magic, Tokyo was “saved” by erecting a giant dome of solid rock around the city. Unfortunately, demons and angels also decided to use the city as a battleground and feeding ground; so now what is left of humankind ekes out a miserable existence by hiding in disused underground train stations and malls. 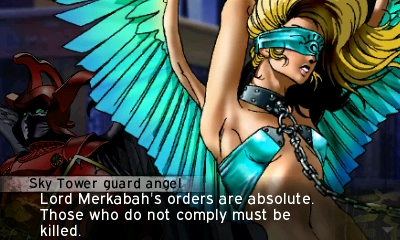 To protect humanity, a group known as the hunters goes out and kills demons, collects their meat (the only edible thing left in the world), and keeps the areas around the human “villages” safe. They do this with the assistance of demons that they’ve recruited into doing violence on their behalf. You play as a novice hunter, who finds himself killed by a powerful demon right at the start, but brought back to life with incredible powers of his own after making a pact with a godlike being, Dagda.

It really has to be emphasised just how grim SMT IV: Apocalypse is. The world is one of perpetual darkness, in which things are not meant to live. Every inch of the city is falling into ruins, and even when you head into “beautiful” areas, such as a park of cherry blossoms that is sustained through the magic of fairies, there’s a deeply sinister undertone to the utter starkness of the pink of the blossoms set against the unnatural darkness created by the dome. SMT IV, as an artistic vision, is as beautiful as anything we’ve seen on the 3DS. It’s just unfortunate that the hardware isn’t really capable of achieving the vision that the developers intended.

The SMT series has always been dark and fixated on the discussion of good and evil with razor precision since the very first game. This is a series where, out of necessity, humans willingly submit themselves to the servitude of demons, in order to have the power to fight back against them. To have a demon join your side is not a matter of simply throwing a Pokeball at them. Instead, you’ll need to enter into negotiation with them, which invariably means answering whatever sinister questions they have, and providing them with money, allowing them to drain your character’s health, or giving them items. While your character is nominally in control of the way the demons fight in battle, thematically the relationships between the humans and their “pets” is far more one of mutual benefit. Which is, of course, problematic from a moral perspective. 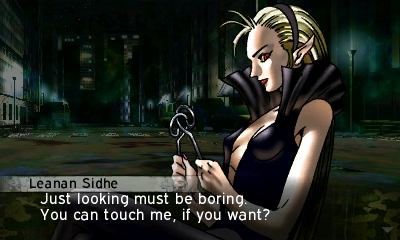 This is also a game that adopts the approach to angels that they’re so righteous and unbending that calling them “good” isn’t necessarily appropriate, and indeed it’s a deliberate decision by the developers to make it difficult to tell angel from demon apart in battle. You fight them the same way, and their sprites on the screen look the same as one another. And humans aren’t much better than the other two groups. In the game’s lore, before the Hunters became the dominant human organisation, there were rival groups, and of course that led to internal fighting during an apocalypse. Meanwhile, it doesn’t take too long for the great hero of the humans, Flynn, to start appearing suspicious himself, and so on and so forth. As with most of the other Shin Megami Tensei games, the overall theme is that “good” is not a virtue that really exists, and that sentient beings are really only ever acting out of self-interest, which is what lends the series its particularly dark tone.

As with all Shin Megami Tensei games, the narrative has a habit of delving into some really dense theological and philosophical themes, and actually piecing together the way the game interweaves existentialism and nihilism with the way it explores moral philosophy, game theory and so on, can take some work. As difficult as the gameplay itself can be, it’s understanding the loaded narrative of SMT IV: Apocalypse that will really require mental gymnastics. Thankfully, the game paces its revelations out over an extended period of time, so, while there are some pretty significant decisions that need to be made towards the end, there’s plenty of information to hand for making those decisions.

The gameplay itself is vintage Shin Megami Tensei and doesn’t really need to be anything else. You’ll form those aforementioned bonds with demons, before forming a party of your hero and three demons, to take on enemies in turn-based combat. Exploiting enemy weaknesses (for example, casting ice magic at a fire enemy) is important, as it gives your party additional “turns”, whereas missing attacks or accidentally hitting enemy resistances makes you lose them. The same rules apply to the enemies, and as with all SMT games, there is a sharp learning curve and high difficulty ceiling to contend with. Play poorly and all the grinding in the world won’t help; you’ll still be trounced by the tough enemies. Play strategically and you’ll find you can overcome challenges even when the party isn’t properly levelled up. 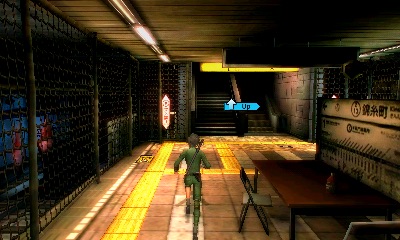 The other key strategic system to take advantage of is the ability to fuse demons together to create more powerful monsters, which is of course a system that we are well familiar with from these monster collecting games by now; but it never grows stale. Experimenting with different combinations and building a balanced party requires a lot of thought, planning and careful execution, and for the min/max player, there is a real thrill in trying to splice together impossibly powerful demons to fight with.

Of course this system will also remind players of the weaknesses of the hardware. The monsters are represented by very low-resolution sprites on the screen, have limited animation, and there’s very little flash about the combat system. The actual creativity that went into the monster designs is incredible, and the research in coming up with them is unparalleled; each monster has a description that tells players the mythologies that these creatures are based on, and even fans of mythology, such as myself, will come across monsters from obscure spiritualities that you’ve never heard of before. It’s such a pity that they’re so poorly represented on the screen, because the design intent behind them is exquisite, from the semi-naked and quite beautiful angels to monsters horrific enough that H.P. Lovecraft himself would be impressed.

SMT IV: Apocalypse is a really smart and thoughtful game on the wrong platform entirely, for what it wants to offer. It’s easy to spot the compromises to the vision that the development team needed to make to have it all fit the platform, and while it’s still an essential title, it’s difficult to sit back and not wonder just how much more it could have been.