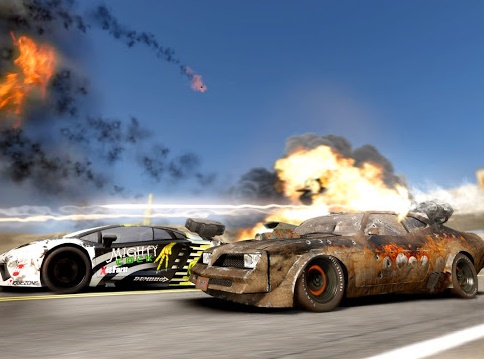 Car combat games have never really been a dominant genre, but if they ever had a heyday, it was the 64-bit era. The genre goes back a lot farther than that – Taito released Crashing Race in 1976 – but the latter half of the ‘90s is when it blew up. That’s when games like Interstate ‘76, Twisted Metal, Vigilante 8, and Destruction Derby scorched their mark on the earth.

Then the whole genre just sort of… fizzled out. There were some gems in the early PlayStation 2 days, but developers seemed more interested in using the extra power for realistic racing sims. Kart racers kept the fun of less serious racing games alive, but the gasoline-fuelled violence of car combat games fell to the wayside.

Enter Gas Guzzlers Extreme, a combat racing game that’s a welcome throwback to those classic crash-’em-ups. It’s a simple, no-frills experience – you pick a car, you pick a main weapon, and you try to be the first (or only) person to cross the finish line. That simplicity is, really, the beauty of the game: instead of getting bogged down in extraneous features, the focus is on getting the fundamentals just right. 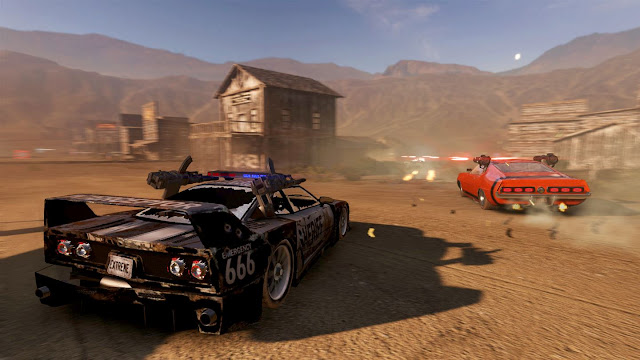 The result is a game that’s a whole lot of fun. I’m about as far from a gearhead as you can imagine, but hooning around a racetrack at high speed is something that’s always going to be exhilarating. Smooth controls and creative course design allow that simple excitement to flourish, and arcade-style physics and handling make it easy to just dive in, even if you’re not an expert racing driver.

Even without the miniguns and rocket launchers, Gas Guzzlers Extreme would be a fun game. It does have miniguns and rocket launchers, though, and securing first place by blowing the person in front of you sky high feels damn good. The combat elements are effortlessly integrated into the control scheme, so even though you’ve got three different buttons dedicated to shooting, it never feels awkward or unwieldy.

It’s not a particularly smart or thought-provoking game – a fact reinforced by prank call-inspired driver names like Seymour Buts and Yuri Diculous. It’s dumb, mindless fun, and sometimes that’s exactly what’s needed. When I come home after a long day at work, blowing up cars (strictly in a digital sense, please don’t call the cops) can be a great way to unwind. 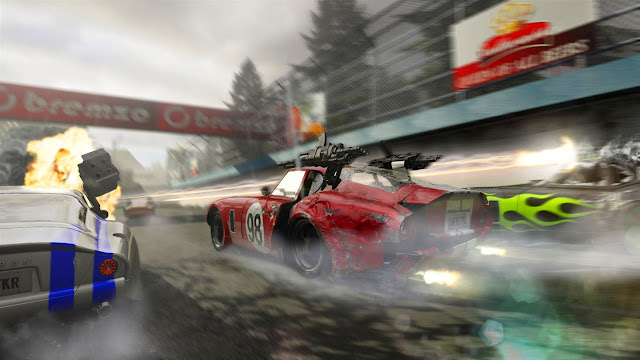 Wrapped around these solid fundamentals is a good variety of different event types. Classic Race is a old-fashioned, gentlemanly race without weaponry (ramming is all good, though). Power Race is the same, but with relatively weak (though annoying) weapon pick-ups strewn about the course. Battle Race is where you get to rock up fully loaded; with your chosen firearm and a generous helping of ammo about the map, being the only one to cross the finish line is a very effective strategy.

Knockout is an interesting twist on the Battle Race: it starts out as a 7-lap race, but for each car that gets eliminated, the goal gets reduced. This can lead to some interesting tactics around when you actually go for the kill, because being too trigger-happy can actually cost you the race. Say you’re in third place, on lap 3 of 4, and you’ve got whoever’s in second in your crosshairs. You could just blow them away right there, but then the lap goal would drop back by one, turning the current lap into the final one and leaving you a very small window to catch up to first place. If you wait until after you’ve started the fourth lap, though, you’ll have a full circuit to catch up to first. 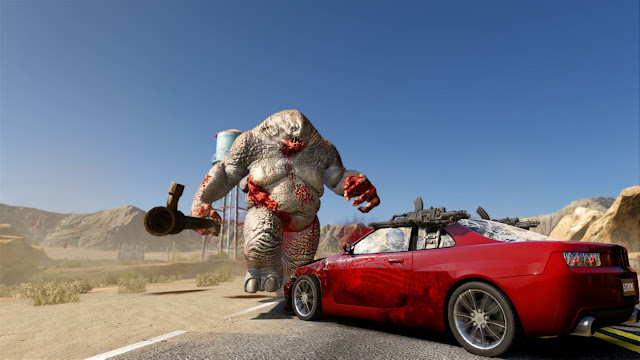 Finally, there are the zombie modes, because not even a racing game is safe from the pop cultural obsession with zombies. In Defend the Base, the goal is to… well, defend your base from a zombie assault, and Survival is just about surviving as long as well. Under normal circumstances a zombie mode would earn the rolliest of eye-rolls from me, but it fits so well into the “mindless, cathartic violence” aesthetic of the game that I can’t be mad. It’s like Carmageddon, but slightly less antisocial because at least you’re running down zombies, not innocent pedestrians.

So, Gas Guzzlers Extreme is a fun game, but on Xbox One, it’s missing one major thing: multiplayer. This would be a perfect split-screen party game, if not for the fact that it’s strictly single-player only. The PC version released a few years ago has a full suite of multiplayer options, and by most accounts, it’s a great game to play with your mates over a few beers. I’m sure there are valid technical reasons for this being removed for the Xbox One release, but nonetheless, it feels like something’s missing.

A decent campaign mode – thankfully, without any sort of bad, shoehorned story – means there’s plenty of fun to be had playing by yourself. Blowing up AI-controlled cars is never going to be as much fun as blowing up your friends, though, so the lack of multiplayer is a disappointing blemish on an otherwise great throwback to the car combat games of old.

The DDNet Awards! PC Game of the Year