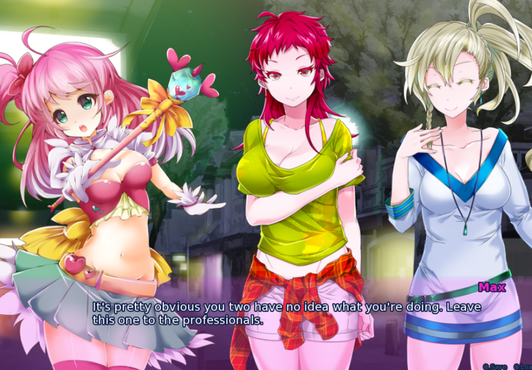 If you didn’t know better, you’d take one look at Alluna and Brie and the Tentacle Menace and assume it was made by a small Japanese development outfit with a real love of sexy, sexy fanservice. But the game actually comes from a developer from rural Australia, and it is looking incredible.

A description of the game, from its Kickstarter: Alluna and Brie features heavy life sim elements, and in between battles the game will play out like a visual novel. You’ll control Brie and choose where she goes and who she talks to, and spending time with friends will unlock new combat abilities and secret event scenes. However, you’re going to need to keep an eye on the in-game clock, because every action takes time, and there’s only so many hours in the day!

The game will have heavy involvement from Japanese artists, as the character work has been outsourced to a Japanese outfit called Indigo Line Animation. Furthermore, Alluna and Brie and the Tentacle Menace will also have a JRPG combat system, which Japanese artist, Doku Denpa, contributing to the sprite work. In other words, this will be a true cross-nations effort, with Australian developers handling the programming and design of the game, and the art coming from Japan in order to retain the authenticity of a Japanese visual novel experience.

If you mosey on over to the game’s Kickstarter, you’ll quickly notice that the game also goes in heavy with the fanservice. Super short skirts, bikinis and all that good stuff has been thrown in and looks absolutely divine. The developer has already had success with its previous game, Max’s Big Bust – A Captain Nekorai Tale, and it looks like the intent behind this game is to take that same style and make it bigger and more ambitious, and generally a more rounded game.

You can see a video of the game’s combat system in action below. The Kickstarter’s got another 17 days to run, but hasn’t quite hit the halfway funded point yet, so it’s going to need your support if you’re interested in it. As a due disclaimer, it’s certainly caught my eye, and I’ve backed it to the tune of $300, because I really, really like Brie and there’s a limited edition figurine in it at that backer’s tier.

The DDNet Awards! Sony PlayStation Vita Game of the Year