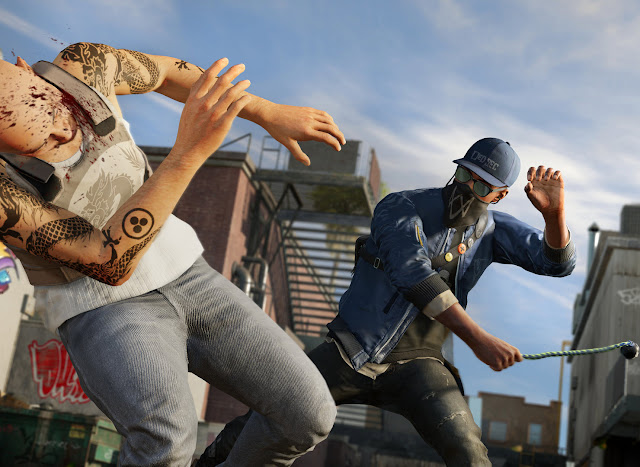 The original Watch Dogs had all sorts of potential, but it too often seemed to miss the mark both in style and substance. It was a game that I enjoyed in the moment but it’s also one that I’ve never come back to; the longevity just wasn’t there, and no one would accuse Watch Dogs as being a classic title. Now we see a shift in scenario, protagonist and tone, and Watch Dogs 2 is far better for all of these changes as it presents a more entertaining, well-rounded experience that both reminds us how important technology is in every aspect of our lives, and warns us to the dangers of that.

Watch Dogs was not for everyone, but I could appreciate some of the grim tones and the ideas that the game teased. I always felt like the biggest issue facing the first Watch Dogs was the disappointment people felt in that it promised more than it delivered. Perhaps I just do not get as hyped up about most games before they release now, but in general I tend to have pretty even expectations for games and I enjoyed most of what Watch Dogs had to deliver. By contrast, my son had considered it his most anticipated game of the new console generation at the time, and he felt let down by a world that teased more freedom than it offered and a story and protagonist that he did not care for at all.

The good news is, Watch Dogs 2 delivers on a lot of the promise fans were hoping for with the original game. First and foremost is the sense of freedom that our new protagonist Marcus Holloway has and in many ways embodies. The story from the original Watch Dogs was grim with a revenge story that worked, but for many people was restrictive and simply not a lot of fun. In that we had a basic goal that kept things moving forward steadily if not terribly memorably while the dark and dirty Chicago of Watch Dogs was not always a lot of fun to traverse. I think there was just a ‘sameness’ to the first game that is not as prevalent here. 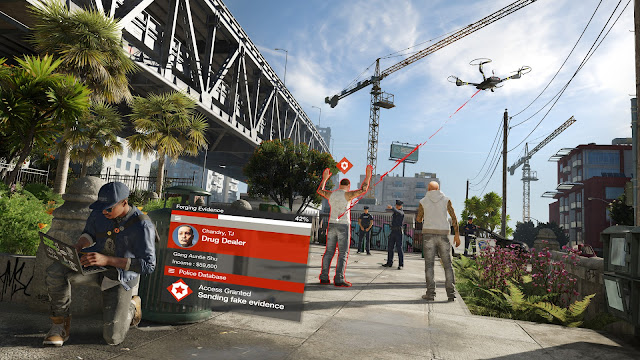 While Watch Dogs 2 is not a perfect game, it has righted a lot of those missed opportunities. For one Marcus is an immanently more likeable character who is younger and more interested in causing mischief than just busting up thugs. He has goals, of course. He wants to take on corruption from the inside using technology as his weapon of choice. In a society that mirrors our own dependency on technology, Marcus has many ways to learn about people and cause mayhem.

Cameras were the best technology from the original Watch Dogs, because through them we had a great deal of freedom in how we approached the game. Watch Dogs 2 hones in on that, giving Marcus more toys to play with and more ways to utilise them. He can 3D print a variety of different weapons and style them to suit whatever approach you want to take to a challenge. Expanded hacking options and greater control over devices encourage some trail and error experimentation that gives the impression that you can approach your tasks in Watch Dogs 2 with a great deal more freedom. This carries over to the new setting of San Francisco Bay. It is a much more vibrant playground that is just begging to be explored. It is ably assisted by NPCs that have a wider range of responses and interactions both with Marcus and with one another, creating a sort of bustling environment that made exploration a joy instead of a job.

This openness to approach expands beyond the city but also the gameplay mechanics, because at its core Watch Dogs 2 is an action game. How that action plays out is largely up to you as Marcus is perfectly capable of violence (though many of the options seem geared towards incapacitating over killing), but he has other tricks available to him as well. Want real fireworks? There are plenty of options to detonate explosives remotely. Guns are an option, but so are sleep inducing darts. Want to avoid combat altogether? Make use of the various cameras to map out your route and trigger electronics remotely to serve as a distraction and sneak past. While I generally came away with the impression that Marcus would prefer a non-violent resolution to conflict, Watch Dogs 2 gives you the freedom to choose and the numerous ways to go about completing your objectives. 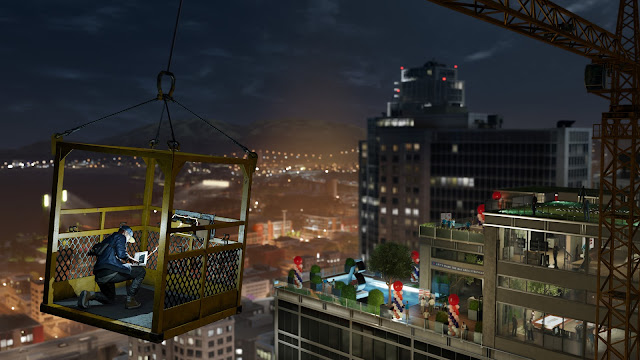 Being an open world game, something that Ubisoft has really become quite skilled at with other franchises such as Assassin’s Creed or Far Cry, Watch Dogs 2 could have become redundant rather quickly if it were to offer the standard open world formula (something else Ubisoft tends to do with regularity with those aforementioned franchise). However, the sheer number of technological options from drones to hacking and more allow you to approach objectives in unique ways that help keep gameplay fresh.

I appreciate a grim and gritty story as much as anyone, but I have to say that the light-hearted approach of Watch Dogs 2 was a great choice. There are some pretty serious topics that the game addresses, from the Big Brother/ “The Man” antagonist that frankly has some very real world parallels. Marcus never loses sight of his primary goal of taking down an operating system that is almost virus-like in how invasive it is. The system is prevalent in almost every walk of life, allowing criminal elements to act as cybernetic puppet masters, manipulating unaware citizens with unseen strings. The potential here for damage is massive, because technology creates a clustering of people. Perhaps not physically, but through the technology that connects them all.

It would be very easy to take this kind of narrative too seriously, but credit to Ubisoft for making Marcus and his friends people you want to spend time with by giving the game an overall sense of levity. Marcus is a member of Dedsec, along with some other characters that you’ll quickly come to love, such as Wrench, Sitara and Horatio that all bring different elements to the group. It makes Marcus actually feel as though he is a part of something bigger as opposed to the rogue, lone gun approach of the first game’s storyline. 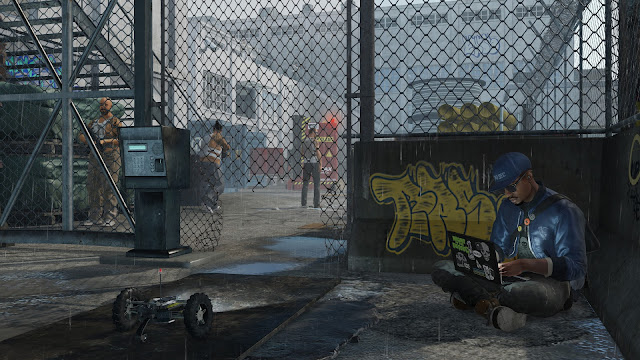 Wrench in particular was one of those characters I was a little leery of right at first. I thought his digitally animated mask (complete with hashtags or @ signs for eyes to convey some level of expressiveness since his face is hidden) would get old, but I quickly found that I enjoyed his screen time. Watching him and Marcus talking in the shop while he tries to delicately pry open a toaster that has a chip in it he wants caused me no shortage of amusement when he got frustrated and decides to take a sledgehammer to it. These are college-aged friends and with that comes some language (such as when Wrench refers to a target as “Captain Dipshit”) to pulling pranks on one another. If the first game was focused on a singular character who is damaged by prior life events, the contrast here is that Marcus and his companions are generally not as jaded by life yet. Perhaps in large part because they have one another to lean on.

These characters, combined with the expansive, colourful city to explore help to ease past some of the minor issues that Watch Dogs 2 does have. Controls are not always perfect, and this is especially pronounced in the driving, which I am not a fan of in the least. The cars just do not control all that well, and no one is going to mistake this for a Forza title. Of course, the game doesn’t need to be, either, but a game that has driving as a core mechanic needs to do things better than this. Additionally, in general there is a lot going on on-screen, and targeting exactly what you want to do when you want to do it can sometimes be fickle, whether you are targeting someone in passing to get some information out of them, or trying to shoot someone. In some ways, this title reminds me of Grand Theft Auto where there are a lot of very different stuff to do, and while does many things pretty well, the broadness in activities sometimes means that the mechanics are not as precise as a game with a singular focus might be. Some missions fit very organically into the world and events seamlessly, others are far less interesting and come across as bolted on to add content. Combat is good, if not always great – but perhaps that makes sense since Marcus himself would prefer to hack than fight.

These little distractions cannot take away from the big picture however, as Watch Dogs 2 does a great job of demonstrating the potential perils of a too-connected world and improves upon the first game in multiple ways. This is not a guns over brains game – there is an interesting topic at play here about our society’s dependence on technology and Ubisoft deserves credit for exploring this theme. The characters and narrative are leaps and bounds more engaging than the revenge tale the original game tried to paint.

The Last Guardian: This will be my everything (but I suspect many will not like it at all)