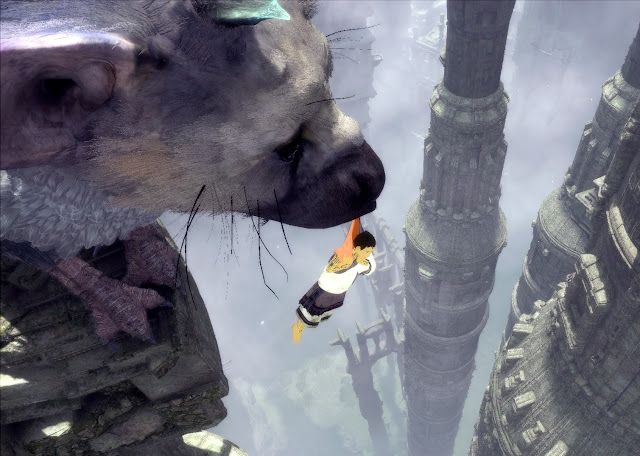 I have been fortunate enough to sit down with The Last Guardian for an hour or so, in order to test out a couple of different demos that show the game at various points. I came away with the overwhelming impression that this game is going to be one of my favourites ever, but I also now fully expect it to be a deeply unpopular game among players and critics.

The core theme in The Last Guardian is the relationship between the (as far as I can tell) unnamed boy, and the mythical beast, Trico. Trico looks and behaves like an amalgamation of a cat, dog, and fox, and within moments I felt a deep resonance between the boy and Trico. There was one scene where I needed to encourage Trico to leap into a pool of water, which he seemed to be fearful of. He was sitting on the top of a ledge looking down at me with his giant puppy eyes and I could feel his instincts clashing with his loyalty to the boy. Mechanically overcoming this puzzle simply meant that I needed to toss food barrels into the water, and in Trico went, but the scene plays out with such a wonderful attention to detail that it’s far more than a simple puzzle. Once in the water Trico then decided to play with his food by bouncing the barrels up and down in the water. I was in love.

I suspect that other players will find these interactions slow and ponderous, given that Trico will spend a good portion of time doing as he wants. In another sequence I had to encourage him to jump up from ledge to ledge, and after giving the command I would need to wait for him to get around to listening to me. At other points he seemed to ignore me completely and would get distracted by some movement that he saw in the distance. Players are used to AI companions following commands with the precision of an F1 vehicle. Trico is going to seem ‘poor’ to that expectation. 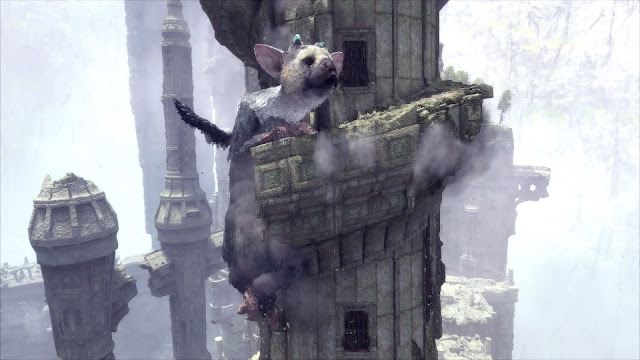 But he isn’t poor AI at all. Trico is adorable, and Ueda-san and his team have clearly worked hard to give the character an organic, living personality, which is so clearly critical to the emotional connection the game asks for you to form between the two characters. It’s brave to ask players to see characters as something more than mechanical processes and coding patterns. It’s brave to ask them to be patient with characters. Working with Trico is anything but intuitive, but the flip side to that is that working with him is a deeply emotional experience.

The Last Guardian doesn’t look like it will be a difficult game, but it will be one that won’t hold your hand at any point. Every bit of progress I made required that I explored around and tested things out, with no tutorials to help me out. Nor does the game make exploration brainless, as happens in games like Tomb Raider. There’s no way to highlight interactive objects, for example. You are just going to have to spot them for yourself by surveying the environment.

And that, too, is going to be subjected to criticism, I would suggest. There are moments when you will simply have no idea what you need to do next, and while the game will eventually give you a clue (there is a voiceover sharing the narrative, and the clues are presented as narrative elements), there are still moments when you could conceivably be stuck and quite lost. And this is going to frustrate people, both because it will slow down the pace of the game yet further, and perhaps even have people scrambling for game guides. 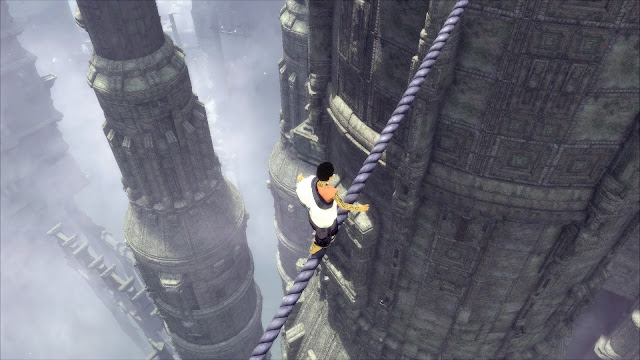 In general, The Last Guardian looks and feels like a PlayStation 2 game. I think it’s entirely possible that people will be put off by that; yes, it’s in high resolution, but the environments and characters have that simplicity to them so reminiscent of older generation games. My interpretation of it is that it’s an artistic effect as much as anything else; this is Ueda-san’s sense of aesthetics and a call back to Ico and Shadows of the Colossus. As deliberate design, it’s gorgeous and painterly, and the animation of the characters is such that they develop deep personalities without uttering a word. The effect is subtle, however, and after No Man’s Sky, I’m not certain the mainstream is on board with subtle.

There’s a lot of symbolism scattered through the game that I can’t even begin to piece together without having experienced the whole thing. Death has clear meaning, and indeed you’ll need to play a minigame of sorts with each death in order to revive the boy. The minigame isn’t much (it just involves mashing buttons until a series of icons on the screen disappear) but the fact you have to do this as soon as the game starts suggests that there’s some deep spirituality at play in this game. This has me excited, as Ueda-san’s previous games were both incredibly Japanese and I find Shinto spirituality to be remarkably beautiful. If this game is a reflection on that, then I will love it, even beyond the overt love I have for Trico and the boy, and their relationship.

Indeed, if the game is as spiritual as I suspect it might be, the foxlike qualities of Trico are all the more potent. Foxes are deeply spiritual, near god-like animals to the Japanese, and are generally the guardians of shrines throughout the country. Trico as a “guardian” suddenly takes on new layers of meaning in that context, and again I don’t even want to try and unpack that all until I’ve had the chance to play the whole game. 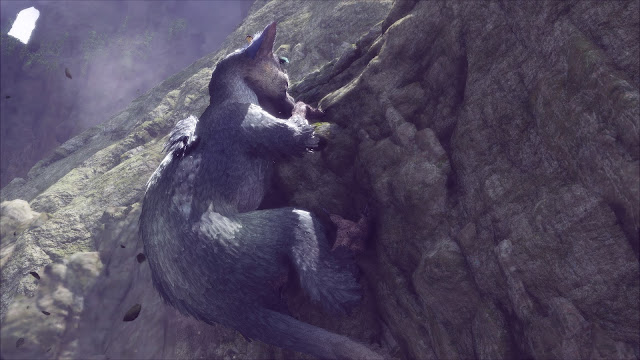 I don’t want to give away any more of the game, so I’ll stop here. I do think that this will be a powerful, emotive, and valuable game when it lands in December. I believe it will be one of the most important art games released in quite some time. I am concerned there are so many elements to the game flying in the face of mainstream expectations for games that those going in expecting something AAA will be disappointed by what they get. I hope I’m wrong, but I doubt I will be.