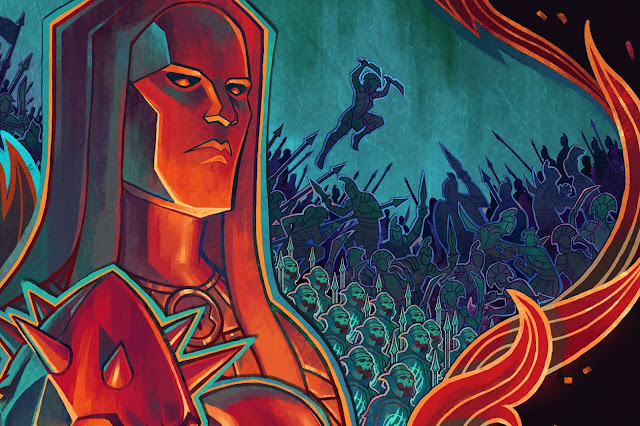 I have a soft spot for classic computer RPGs, and Tyranny checks a number of the boxes I would normally look for. However, beyond the familiar, nostalgic gameplay there is an interesting if twisted tale that challenges the player to examine good versus evil in a different light than most video games do.

From a ‘what kind of game are you getting?’ standpoint, Tyranny has plenty in common with Pillars of Eternity. I consider this to be a good thing as Pillars of Eternally was excellent, and Tyranny is also incredibly well-made. But it won’t draw you in with its art direction. It has some old school visuals that aren’t ugly by any means, with some great use of colour to punctuate what is otherwise a very brown and often desolate landscape, but you are not viewing a technical marvel here either.

No, to fully appreciate what Tyranny has going for it, you have to be willing to look under the hood a bit further. This is a game that requires a lot of reading, displayed through walls of text, which some might find to slow the pace of the game down too far, but its story is an interesting one that sets a grim tone that permeates the entire adventure. What makes Tyranny unique is how its storytelling is less about doing the right thing, as you do in so many other RPGs as a true here, and instead you’ll find yourself given choices that, regardless of choice, are not heroic at all. There are no ‘right answers’ and plenty of consequences in making those decisions. 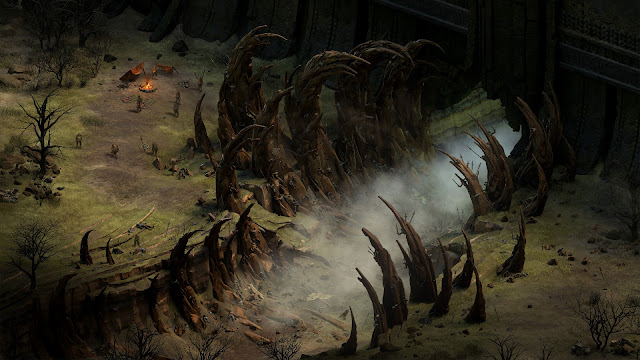 The tale starts grimly as we are told of conquering Kyros armies that are killing or enslaving everyone in their path. You create a character who is not a scrappy defender of villages like we see so often in RPGs. No, your character is an up and coming member of the Kyros army. You are not saving the people in the Tiers, you are deciding how to go about taking over their homes. Your job is not to stop their wagons from being raided for supplies, but in fact you have to feed your army so you need to decide if you wish to raid their wagons or occupy their farms. While there are times that you might set free a villager or spare them, it usually comes at some other consequence. There are few moments where you’ll occupy the moral high ground, and Tyranny is a far more memorable game because it makes you look at the world from a different lens.

Customisation of character is a big part of RPGs like this, and Tyranny delivers on that front. A myriad of classes, specs and background options allow for you to build a character that suits your particular style of play. During character creation, you have the option to jump right into the game via a quick start option that sets some standard story elements for your character, or you can take the time to work through the Conquest mode. I would strongly encourage you to do the latter as it gives you considerably more ownership over the story and your character.

Conquest most readily resembles a board game as you see a pivotal piece of land or an important building and you are tasked with one of two or three major options. These can be where you want your character to move to for the next stage of the story or what kind of tactic you wish to use for taking over a fort. Then there are sub-choices within where you essentially align your character with one of two major factions who comprise the bulk of the Kyros military. One side is portrayed as a disciplined soldier sect while the other is a more fanatical ‘survival of the fittest’ that relies on numbers and savagery over militaristic precision. There are advantages to both and your decisions will impact everything from your reputation in these sects to how potential companions view you to whether a scenario plays out via combat or negotiation. 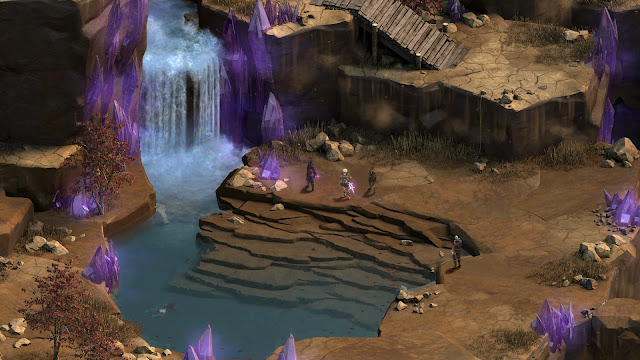 There are plenty of different systems in place to keep the game itself entertaining above and beyond the story and the walls of text. Everything from semi-real-time combat (you can pause and issue orders, like classics such as Knights of the Odl Republic or Baldur’s Gate) to spell creation to a multitude of skills and stats to choose from will keep you busy. The combat is somewhat simple and not terribly engaging – you mostly auto-attack your selected opponent and sometimes trigger special skills that have cooldowns. There is nothing inherently wrong with it, but the combat is not as interesting as that found in some newer RPGs such as Divinity: Original Sin. The world seems big, but it lacks an overworld. Like many similar RPG titles any more you use exit points from a stage and they lead you to a map where you click where you want to go next. This does create a somewhat more linear experience than RPGs with a true overworld map with lots of open-ended exploration.

Speaking of open-ended, there is one thing about Tyranny that absolutely rubbed me the wrong way. With its biggest selling point being the unique narrative, I was a little frustrated at the abrupt, anti-climactic ending that feels as though the game is being set up for a sequel or DLC. Not all of the loose ends needed tying up, especially if there is going to be more content, but here the game’s curtain call feels forced and premature.

Tyranny is an excellent RPG experience that has many of the hallmarks of great classic role-playing games while still making plenty of smart choices to modernise the experience for today’s audience. Refined systems and a story where choices can often have some real consequence made my time with Tyranny rewarding, despite a disappointingly abrupt ending that left me wanting for more.