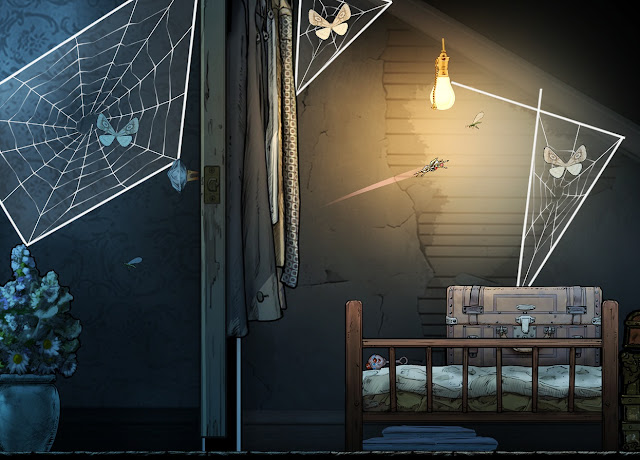 Spider is a neat little puzzle game where you play as a spider and is the sequel to Spider: The Secret of Bryce Manor. It’s okay if you haven’t played that game though. Most people haven’t. It’s pretty niche. This new game doesn’t rely on you knowing about its predecessor, and has some neat ideas that come together pretty well.

At the start of the game, it will ask if it can use your IP address so it can use the real world time and weather for the game. If it’s a clear sunny day it will be the same in the game. If it is a rainy night it will so in the game also. The time of day and weather open will affect the stuff that shows up in-game and will unlock different secrets. The game also uses the real phase of the moon. There’s some niuce replay in this, attempting to experience the game across many different scenarios, though if you’re impatient (or live in a desert where rain comes once a year if you’re lucky) you can change the weather and time of day manually.

The main aim of the game is to spin webs and eat bugs that get caught in them all while finding clues as to what happened to the former occupants of Blackbird Estate. Spinning webs are easy to do but hard to master. To spin a web you will have to make geometric shapes. The bigger the web the stronger it is, and the larger prey that it can catch. 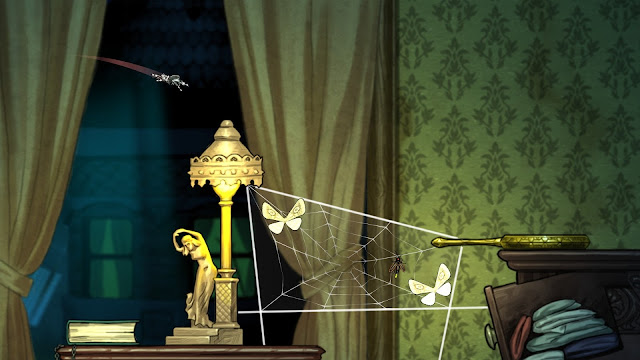 Though it’s a puzzle game, Spider is also a score attack kind of arcade game that rewards quick reflexes to go with quick thinking. You get a combo by catching and eating multiple bugs in a row. Adding further variety, not all bugs have to be trapped in a web to be eaten; bugs like ants and bees have to be tackled to be eaten. Some bugs like red ants will even attack back. Your spider’s ‘life’ in this game is a silk count. You use one silk for every web you sling and when attacked you will lose some more silk. Depending on the time of day, weather, and what phase of the moon it is will determine what secrets and clues that can be found as some of them can only be found at certain times.

The spider is fast and can jump and move really well but it took me a while to get a hang of the logic behind the controls. For example, I would be pushing right on the analog stick and while my spider would dutifully start moving in that direction, he’ll then wander down a wall, and at the base for some reason he’ll start heading off in the left. Another problem I had was there were a few times where my spider would sink down through the floor. It was a glitch because there was no way to get him back up and I had to restart the level. I also felt the camera was too zoomed in for the kind of action that it was promoting. You could manually pull the camera back when you wanted to, but as soon as the spider started moving the camera would zoom right back in again.

The game is simple and fun and can pose a challenge to anyone who wants to find everything in the game. The developers had some really good ideas with the moon phases and to use real world time and weather. I think in the context of a more in-depth and purposeful game, that kind of feature would be distinctive and potent. Hopefully some other developers were paying attention.