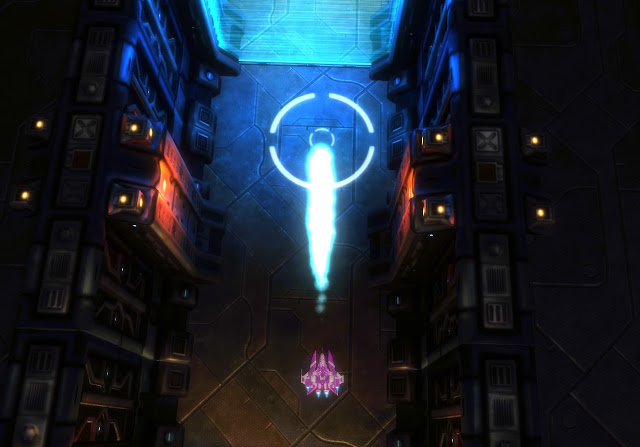 Dogos is a new SHMUP that has a classic gameplay style. These games are an acquired taste, but for the genre’s fans, the difficulty and sense of rewards are equal drawcards, as is the sheer action that the best examples of the genre are able to throw at players.

Like most SHMUPs you play from a top-down perspective, but this one is a little different from the outset in that it has a more complex control system, requiring you to pilot your ship using the right and left analog sticks. The left stick moves the ship while the right turns it in any direction. You use the R2 and L2 triggers to fire your gun and missiles, with R2 being used to take out air units and L2 used to take out the ground units. While the controls take a little to get used to, for the most part they end up being quite intuitive, with the exception being the ground attack, where you’ll have to press the button over and over again to keep firing and with the number of enemies that need killing at times my hand cramped up from this.

The enemies you take out will sometimes drop power-ups, health, or extra lives. There are only a couple of different power-ups but the one I used the most seemed to also drop the most; the homing missiles, which do exactly what you think they would do. While flying through later levels you will run into lots of obstacles like a laser that goes on and off just like in old school games they are one hit kills to you. Another obstacle is a blue force field, and irritatingly it wasn’t until the last three levels that you get a weapon that can shoot a hole in these and let you fly through. Good design would tell you that the ability to remove the force fields should have turned up in the game at the same time the force fields themselves did. 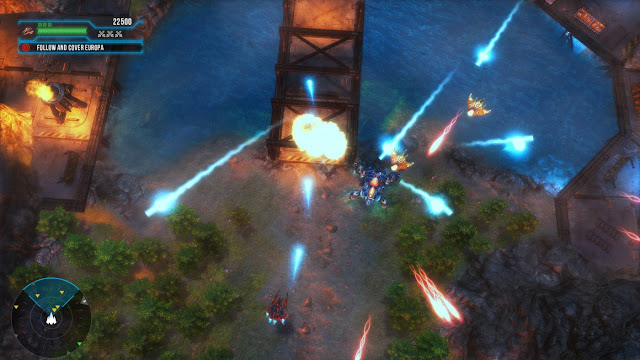 Levels are decent sized, and you’ll need the handy map you can bring up to help find your way. The map sizes are one of the better aspects of this game, as it does promote a sense of exploration on the way to the boss fights, which show up at the end of most levels. These boss fights can be tough, and they also drag on for way too long as it takes a ton of hits to take one out. In later levels, the difficulty ramps up with the bosses, and it’s a difficult enough game that newcomers to the genre will want to scale the challenge right down. Each level has three additional objectives that can be done to earn you a higher score but with a lack of a leaderboard, there really is no reason to go after these. You will also unlock new ground and air weapons to use after beating a level and also new paint jobs for your ship. The game is very short, and really needed that online leaderboard, because you’ll breeze through it in a couple of hours, and there won’t be much to encourage you back.

There is a story to this game with each level starting with a journal entry by Desmond as he fights on against the Zeetnuk. As the silly names will probably tell you, the story isn’t very good, or deep, or even able to explain to players what’s going on. If I had to guess I would say the Zeetnuk are a type of alien, but I can’t be sure. Even B-Grade sci-fi tried to explain to the audience what the menace was… The story journal entries are voiced which was a nice bit of production values. It wasn’t really good voice acting though. There was a bit of humour thrown in there with the “tip of the day” which was a nice touch.

Otherwise, the game is quite limited; there’s not a great variety in the music, and there’s moments of lag when the game gets really busy, and this is not a good thing for a genre that relies on precision as heavily as the SHMUP does. The cheapness of the overall art style can also be highlighted by the fact that, while you have the ability to attack ground targets, you can’t damage scenery like trees and so on. 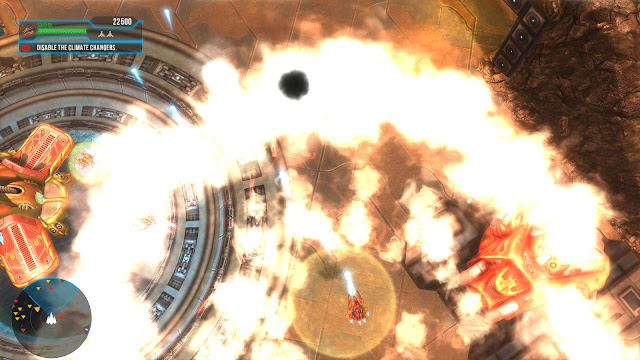 The game is decent at times but it lacks some features that would have made this a better experience. Things like mutiplayer and a leader board would have really helped to give Dogos legs. There’s also some irritations in the art style, frame rate and general presentation, and the lack of a narrative to give context to what’s going on hurts as well. It’s fun and all, but Dogos is simply too limited for its own good.