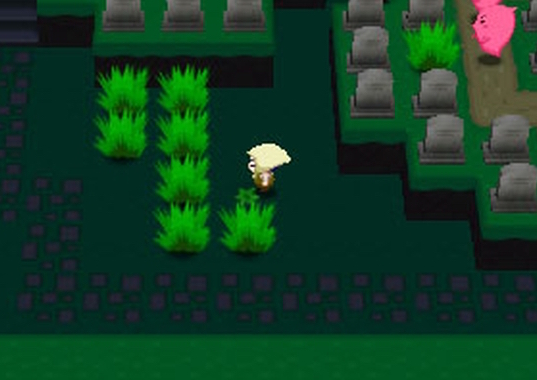 Imagine if you played a Legend of Zelda game, and there was no grass to distract Link from his mission, because someone – a far less heralded hero – has already cut the grass for him. The field is clear, letting Link get on with his journey without distraction. Legend of Kusakari is grass cutting simulator you never knew you needed.

Related reading: Our interview with the Japanese developer behind the game.

In The Legend of Kusakari you assume the role of Shiba Kari, a grass cutter who ensures the village hero is free to instead spend his time slaying evil creatures and protecting the realm. Shiba Kari is contempt with not travelling far and wide to rescue a damsel in distress. It’s a simple life, but someone’s got to do it, right? Sydney-based Nnooo picked up this game from Japan to localise and publish in the west, and it’s easy to see why; the whole thing simply oozes with personality and charm.

Simplistic in design, The Legend of Kusakari is a fast paced puzzle game which encourages players to mow through the levels at speed. Shiba slowly but continuously loses his health, which makes speed the main priority. Running into enemies makes Shiba lose health and the only way to regain this lost health is by cutting some rare blue grass. In addition to his standard cut attack, Shiba can use his scythe effectively in a spin attack, as well as being able to sprint around the map. If it’s not already abundantly obvious, this game acts as a letter of love to the entire The Legend of Zelda series, with a lot of the design elements taking cues from the top down 2D Zelda classics like A Link to the Past and the Minish Cap. 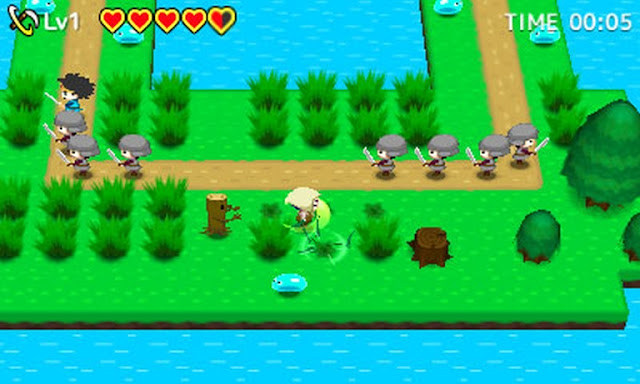 The main mission mode has you go through 50 levels. The first few levels are a slow and steady introduction to the game, but as you progress they get progressively harder. Early levels start off with grass being clumped together, or in a path that guides you from start to finish. Eventually you will start having patches of grass that are separate from each other. There is just enough time to risk cutting all the grass in these levels, but as you get deeper and deeper into these missions your health whittles down to the point where you need to cut blue grass to replenish it. Blue grass, unlike the green grass that covers this world, is quite rare. When Kurasaki really hits its stride, it’s a game of quick risk/reward decision making: does the score rewards from venturing to a sparse spot on the map outweigh the risk of running out of health?

It’s a decision that needs to be made fast. Each mission is timed, awarding a rank on completion. Each mission also comes with its own challenges, which are compiled in the Greenthumb Almanac. Think of this as an achievement mode. On completion of each level you are given a page of the almanac which list the varying types of grass and weeds cut by Shiba Kari. The requirements to unlock the pages are revealed following the completion of the level, but most are goals similar to avoid getting hit, avoid healing and so on. Completing this is a nice challenge to return to if you’re looking for more.

In addition to the mission mode, The Legend of Kusakari features an endless mode. The endless mode plays like a much more frantic version of the missions, where health really does matter. You have to move from grass patch to grass patch searching for the healing sprigs of the blue grass. It’s fun, and frantic, begging to be played one more time to to try and better your previous high score. A leaderboard is available too, which always encourages some friendly competition. 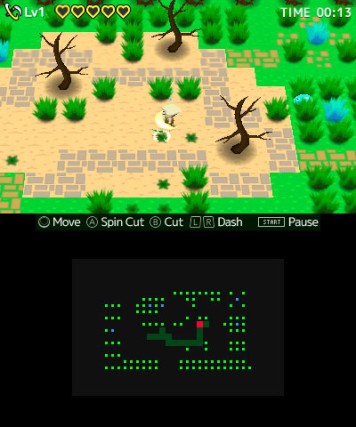 By far the best part of the soundtrack is the trumpets that assault your ears with power and passion. They’re off pitch, very sharp, a fitting satirical compliment to a game about the groundskeeper that acts as hero. It’s not what you would call a beautiful epic soundtrack, but much like Shiba Kari himself, the oddity is to its benefit. Admittedly it will get repetitive, but the initial impact of its weirdness will really sell you on the game’s charm.

Nnooo did the right thing in spotting and publishing this one. There’s a clever mix of addictiveness with basic gameplay to keep players going without getting them too irritated about the more difficult levels. Ultimately the experience of playing this mirror’s Shiba Kari himself – the game will never be as notable as the heroes that exist in its world, but humble as it is, there is a real sense of satisfaction in clearing that field of long grass.