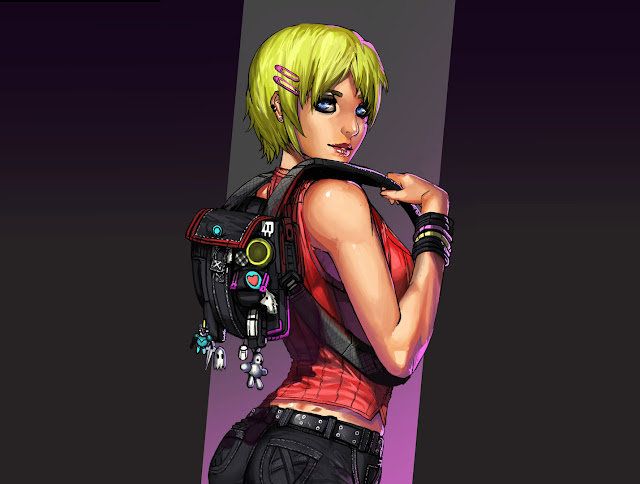 Family trauma is a tough demon to tackle in a video game, but indie outfit Hailstorm Games touched upon it liberally in its 2014 sidescrolling horror game, Claire. With a heavy dose of surrealism and Freudian psychoanalysis thrown into the mix, Claire was a very focused experience which fleshed out the experiences of its title character. Now, with the Extended Cut seeing release on PS4, Hailstorm Games have ironed out a lot of the issues in the original release and added content to make the overall experience much more enjoyable.

The writers need to be lauded for the seriousness with which they treat the game’s narrative. Every aspect of its design suggests careful planning and a clear empathy for others which informs the way that Claire is written as a character. Waking up in a hospital room while taking care of her bedridden mother, Claire’s loneliness and guilt becomes manifest to create a horrific, tainted version of the reality she once knew, and her journey through the loci of her past is frightfully compelling as she searches for the truth of who she is and why these supernatural forces are tormenting her.

The developers handle Claire’s trauma and negative subconscious through surrealism, using harsh symbols and puzzles to steer Claire towards the ugly truths around her family. The scariest parts of the game make liberal use of the uncanny valley, exemplified in sharp transitions between a mundane “normal” world and a dark, festering alternate world filled with sentient shadows. The result is a visceral experience which is light on the dialogue and yet is easy to understand, tapping into base primal fears of the dark, of violence and of isolation to really get into the mind of the player. 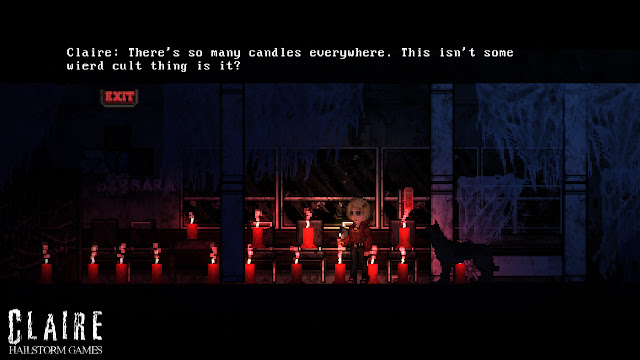 I’m a bit conflicted about Claire’s visual style. The pixel art is beautiful and it’s clear that a lot of time has been spent on making each room and object feel unique. There’s very little sprite repetition, lots of little details that give character to the locations and movement where you don’t expect there to be any. And then, of course, the game decides to shroud it all in darkness. While the light mechanic does wonders for the atmosphere, it leaves the game looking rather uniform when in actuality it’s anything but. Every room looks different, surely to alleviate the risk of players getting lost. There’s also some amazing visual storytelling since each room is an integral part of Claire’s life and upbringing.

Oddly enough, the sprites you’ll be seeing most often are the ones which aren’t as detailed. Claire has a few distinct sprite sets for each stage of her life as mentioned before, and while each of these look great standing still, the quality of their run cycles vary. The jumping sprite is also particularly immersion breaking, especially considering the jump is not useful in many situations in the game. The same deal goes for the enemies in the game, which are largely monocolour and don’t have the same visual menace that some of the background sprites exhibit.

The same can be said about the gameplay; Claire is perhaps most compelling in its narrative segments which just involve walking down hallways. Monster encounters are mostly throwaway and while there are hiding spots for players to wait out the appearances of the monsters, in other cases merely running past will suffice. The game is handled in a 2D plane but environments are three dimensional; the easiest way to think about this would be that entering a door represents Claire making a 90 degree turn. It’s hard to get your bearings around this at first so players will likely develop a reliance on the map, which is very useful but requires you to look away from the action for just a little bit, breaking the immersion and tension that the game works so hard to build. Because much of the game is structured around fetch quests and moving to certain areas of the game to trigger cutscenes, I found myself bringing up the map many times as I would have been lost without it. The side-on 2D artstyle allows Hailstorm Games to really amp up its spritework, but this happens at the cost of effective, flowing exploration. 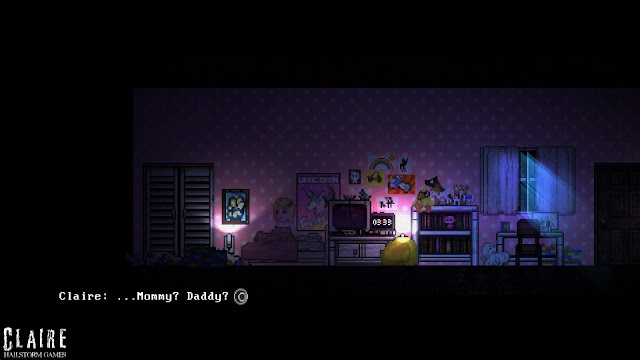 That’s not to say the gameplay should be written off however; while they overall experience can be tiresome, the developers do find ways to create some very engaging scenarios with the resources they have on hand. There’s at least a few rooms, puzzles or enemy encounters which are carefully planned to be memorable, and there’s enough of them to string along a player’s interest until the narrative really starts to shift into high gear. The game comes with three difficulty modes and a variety of endings based on how well you did.

The move to PlayStation 4 also gives the dev team a few more tricks to play with. Controller rumble is used nicely to build tension in cutscenes. The PS4’s graphical capabilities also allow for more dynamic lighting effects. The game does feel very natural on the Dualshock controller and the detailed sprites look good regardless of the TV size.

The focus in Claire however will always be the narrative, and it’s that aspect where the game shines brightest. While the gameplay and production values appear weak at first, it’s refreshing when all the design choices can be justified through the story and work in favour of it. Claire: Extended Cut is a great experience which really takes the issues of trauma and guilt seriously. While Hailstorm Games does at times get carried away with moralising, the overall story is effective and comes with enough twists and turns to cover the admission price.