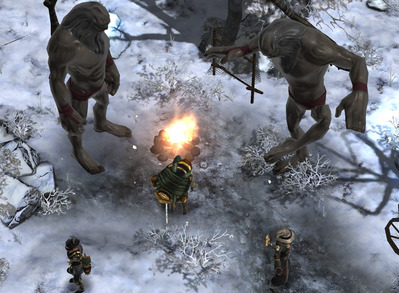 It has proven to be a sound commercial idea to develop throwback RPGs that remind people of their time playing the likes of Baldur’s Gate and the SSI Dungeons & Dragons games. Fancy that – creating things in the vision of some of the most respected games ever made has proven popular with players.

So now we have titles like Wasteland 2 and Divinity: Original Sin, and those were awesome. Even Dungeons & Dragons Sword Coast Legends, poor as it is, did its best to be the authentic Baldur’s Gate experience. It is this heritage that Ember is also trying to channel, and though it is no Divinity, it’s also significantly better than that D&D game.

There are some world shaking events in motion, and in order to combat the deep evils that are stirring, a young warrior priest resurrects a long dead hero from the Lightbringer clan from the dead in order to save the world, because living crystal things (the Embers) are being killed and this is not A Good Thing (TM). So, priest-fellow and undead-creature-that-looks-human team up and set out on a massive quest together. Yes, it really is as simple as that. This introduction had me worried, as someone that likes his RPGs to tell a cracking (or at least, decent) story. The whole ‘messiah raised from the dead to save the world’ trope is beyond passe at this point, and while there is a very fine line between tradition and trite, and this plot hook well and truly leaps over that line. 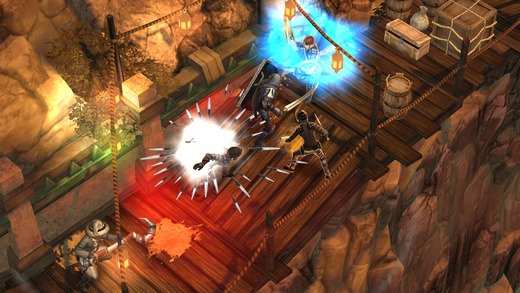 The introductory dungeon didn’t do much to allay my fears, either. Based on the tutorial the game seemed like it was going to be more akin to a pausable Diablo clone, which is to say that it looked like it would pretend to be like Baldur’s Gate (where you would be constantly pausing the real-time action to issue new orders to your characters), but in practise the combat would be too simple to bother. Characters had minimal special abilities and you could just spam the ones they did without bothering to pause the action. A pausable combat system should be highly tactical, as it is in Baldur’s Gate or, more recently, Dragon Age: Inquisition, but other than making sure that the characters were targeting the same enemy (because it is more efficient to deal with one enemy at a time), there were no tactical decisions to make. There was no reason to pause the combat, in other words, so the whole thing felt immediately shallow and unfulfilling.

Thankfully, this is a game that is poorly represented by its tutorial. Once you’re out and about in the world, the whole experience starts to open up substantially. As with Baldur’s Gate, you’re given large areas of overworld to explore, and will come across side quests and points of interest unrelated to the main story as you go along. There is a real incentive to explore the world because the rewards are worth hunting down, and it’s a good looking world to boot. Even on the iPhone 6s screen – which is really too small to truly get everything out of the game and I would recommend Ember for iPad or iPad Pro owners instead – the rich colours and quality character models from an isometric viewpoint create a rich fantasy aesthetic.

The combat system improves over time too. Special abilities are linked to equipment, not earned through experience levels, and this forces you to really play around with how your character is armed. A piece of armour that you loot from a chest might provide better statistical bonuses to your characters than what they are currently wearing, but this might mean that you have to forgo skills and strategies that you have developed a strategy around. For example, early on I had to decide if I really wanted to give up a group heal special ability – intensely useful in all combat situations – in order to improve my character’s helmet armour. I opted to stick with the old helmet for a long time. Any RPG that actually has me carefully considering my equipment choices is one that leaves an impression on me for its strategic depth. 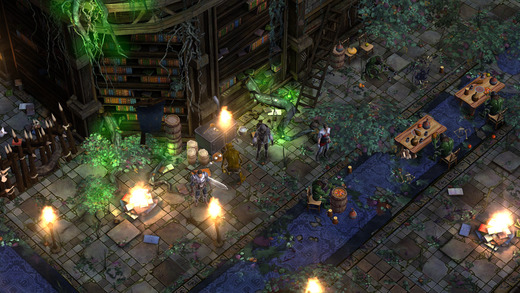 The combat itself doesn’t become much more complex, and that pause button continues to be used almost exclusively to get all the party to focus their attacks and abilities on a single enemy. But the chaos of battle does become substantive, with larger groups of enemies, and a greater mix of those enemies (some ranged, others melee). Those enemies also have more health and do more damage, and it becomes increasingly important to make good use of potions and healing abilities while ensuring that you’re focusing on the right sets of enemies. For raw challenge there are other games out there that are sharper (Divinity and Wasteland), but Ember manages to do just enough to keep your attention throughout and leave you just a little apprehensive about what the next boss battle will bring, and I’d say the quest is precisely long enough to offer a worthwhile adventure without trying the patience.

What never quite hits a stride I’m comfortable with is the storytelling. Right throughout Ember struggles to offer any kind of narrative that we haven’t experienced better somewhere else. The game does work incredibly hard to try and sell its grim dark fantasy world, but that’s constantly undermined by being so completely predictable that there’s no real surprises at any point. Further, world-building is really quite limited. There’s some tomes to pick up along the way which help give a sense of lore to the events unfolding in Ember, but it’s not a patch on the lengths top-flight RPGs go to in giving players context to what they’re doing. Without that context there’s minimal drive to actual care about what’s going on, either in the world, or to the hero’s party, and so, when I was presented with choices that would determine the narrative branches I would head down, I was too blasé about it all to really consider what I was doing.

Ember is a fun little game, which sits nicely on mobile to help while away long commutes without pop-ups asking for you to spend money on in-app purchases every few minutes. On the other hand, if you’ve got an iPhone you’ve got access to Baldur’s Gate, Knights of the Old Republic, and if you’ve got an iPad there’s also the Spiderweb Software titles. Sadly, Ember’s a distant aspirant to those games.