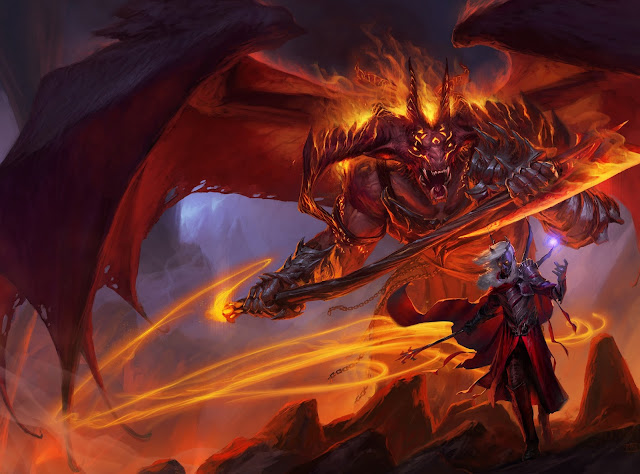 There are plenty of breakneck platforming games out there, and 10 Second Ninja X definitely qualifies as one of those, but it has some extra wrinkles that keep it fresh when compared to its contemporaries in the genre.

The basics are all there: pleasantly perky music, colourful yet simple graphics, precision controls and a lot of death courtesy of trial and error. Why is that? Because there is a bit of puzzle-solving thrown in for good measure due to the way enemy robots are strewn about the stages. These robots are waiting for you to kill them one of two ways. Both are delightfully ninja-like as you can hurl throwing stars to pick them off from a distance and the other requires that you get right up close and personal to the robots and slash them with your sword. 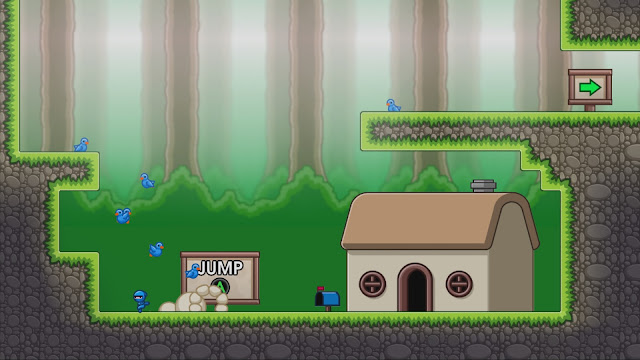 There is a good deal of strategy involved here, because while you can slash away infinite times you only get three throwing stars. The stars are great because they are fast and allow you to take out enemies from the far side of the screen. The sword is lightning quick but you have to be right up on the robots. These mechanics mixed with double-jump platforming and a ten second time limit per stage keeps the pace of each stage incredibly brisk.

Completing each stage within certain time frames (I mean, it’s 10 seconds – how much window is there per time frame? Plenty as it turns out) helps you to score a one through three star rating. Like a lot of other games, these stars serve as an unlock path to future stages that will try to kill you with a variety of traps. To be fair, I died to the timer more often than the environmental hazards, but those obstacles are very real threats and you will have to ration your throwing star uses accordingly. Success breeds satisfaction, failure can lead to the urge to rage quit. 10 Second Ninja X is fun, but I definitely had to limit it to smaller sized doses.

Spy Chameleon is fun, but it is also so painfully generic that I can’t see this finding an audience with any but the most bored of players.

It’s a simple stealth puzzle game broken up into tiny, tiny levels. In each of these you need to guide your Chameleon to an exit, while dodging security cameras and patrolling guards along the way. His main trick is the ability to change his colour to one of four (green, blue, red, pink) to blend in with the backgrounds, which makes him impossible to stop. 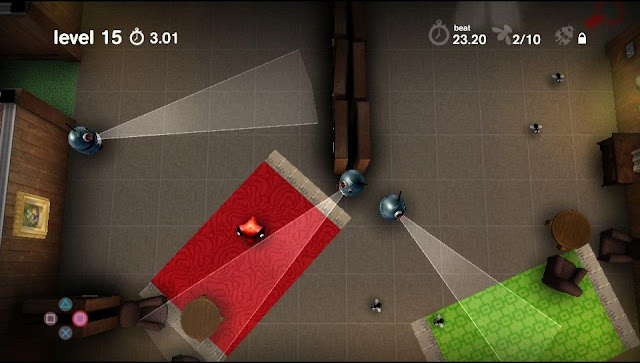 So the game quickly becomes about timing. You’ll need to watch the patterns of the patrols, and then dive from safe spot to safe spot, changing colours along the way to match the backgrounds. It doesn’t become too long to be challenging in the way guards are set up, but thankfully the game isn’t too difficult to make progress through, as levels are short and checkpoints are frequent.

As with mobile games there are a number of optional objectives to each level that can be completed to earn stars, and those stars give completionists a reason to come back and replay levels. Unfortunately the game really lacks for personality and character, and there’s really nothing that helps this game stand out from the pack. It’s less of an arcade experience, but for the same kind of stealth action, you’re far better off picking up a copy of Republique.

There is no shortage of these throwbacks to retro gaming, where speed of play, difficulty, and pixels meet up in a holy trinity of twitchy skill-based play and sheer nostalgia. But because there are so many games of the ilk of Super Mutant Alien Assault, unfortunately it really struggles to stand out.

In this game you’ll pick up a range of weapons before leaping and shooting through horde after horde of enemies until with they all are dead (and you move on to the next round), or you are (and then you start again). Each level is designed slightly differently, and as you’d expect the enemies become more and more difficult as you work deeper into the game. 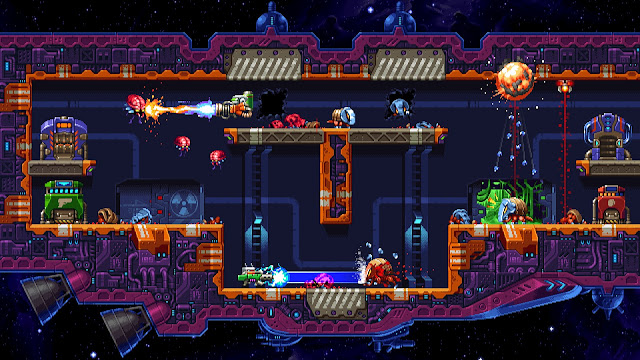 The range of weapons on offer is fun, and each weapon plays significantly different that you’ll need to chance your tactics completely from one match to the next. As you’d hope for from a game like this, the difficulty curve is also significant, and you’ll need to get very good with the twitch reflexes if you want to succeed at this one.

Ultimately, though, a sheer lack of innovation hurts Super Mutant Alien Assault. You’ve played this game before many, many times over the years. And, where you could now play something like Downwell, which really manages to do something creative and original with the basic idea of an ultra-challenging retro-themed game, it’s hard to imagine where any but the most die hard of genre fans could get anything out of this game. It’s clean and works, but it’s a game that is difficult to see people getting long-term value out of it.

Sword Coast Legends is a clear attempt at bringing classic Dungeons & Dragons gameplay back. Under Atari in recent years the D & D license was all-but trashed as games like Dragonshard, Daggerdale and Arena of War failed to even come close to offering what people wanted from a Dungeons & Dragons game. Sword Coast Legends tries hard to get things back on track, but isn’t perfect.

Developed by the now, sadly closed, N-Space, a company better known for its action games, Sword Coast Legends offers a pausable action combat system that works a bit like Baldur’s Gate or Dragon Age: Inquisition; the action stops to allow players to make tactical decisions on who each character in the party is to attack, and what skills they should use, and then with a press of the button, those actions play out in real time.

It’s a great system, as it was when Bioware was busy with the Dungeons & Dragons license itself. What lets Sword Coast Legends down is the generally poor story writing, which offers little of the nuance and decision making that made the likes of Baldur’s Gate so compelling. Here we’re running through the motions less invested in the characters or situation.

There’s a reasonably robust toolset that allows people to create their own adventures, and this helps extend the long-term value of the game if you can get a group of friends together for some play sessions. But, unfortunately, there’s just not enough to Sword Coast Legends to make it the truly classic game that I wish it could be.

I know that Metroid Prime Blast Ball is not the Metroid game fans really want, but to be perfectly honest, I really, really like what this game does actually offer. Though it’s focused around an eSports experience (something I don’t usually spend a lot of time with), I can see myself playing this one for as long as the community remains solid around it.

This is a three-per-side “sports” game in which each player controls a mech, looking to push a giant ball into the opposing team’s goal. They move the ball by firing a gun at it. Quick fired bullets do little to move the ball, while powered-up shots can drive it across the playfield. It’s also possible to knock opponents out of play by either knocking the ball into them (which damages them a great deal), or shooting them directly. It’s worth doing this because a player knocked out of action is a couple of critical sections with a major advantage for your team. 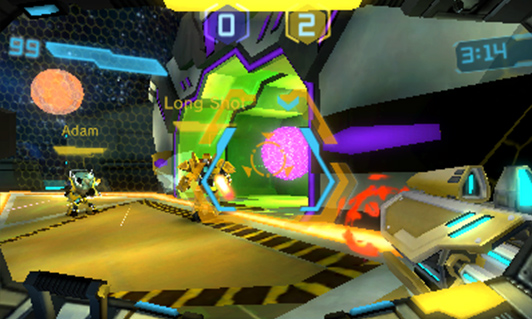 The action is fast and requires a lot of skill and teamwork to be really effective. Communication with other players is limited, but it’s easy to send them quick phrases to tell them that you’re going on offense or defence. Matches are over quickly with the first team to three being the winner, so it’s no great loss if you’re stuck with the occasional weak team.

That’s about all there is to the game. The single player is nothing to write home about, and in the name of balance Nintendo has done the wise thing and not linked progress to power upgrades. Everyone remains on a even playing field throughout. I think this game would have been better on Wii U, because I don’t think people pick up a handheld console for eSports, but as a free-to-play game, this is one of the better that the console enjoys.

– Matt S. and Nick H.
Editor-in-Chief and US Editor