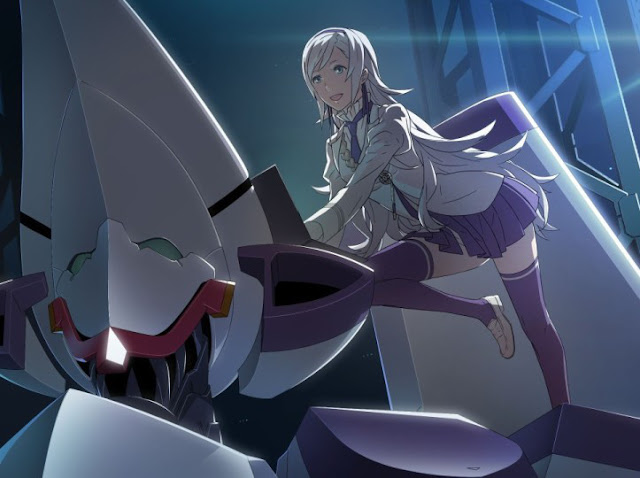 Goichi Suda is a bit of a hero to many on the DDNet team. His unwavering commitment to games that are transgressive and creative, even to the detriment of their critical rating, is noble, and the fact he’s managed to build up a major Japanese development studio almost entirely around him shows that he’s both a visionary and a leader.

Over the next few weeks, through Tokyo Game Show and beyond, we’re going to do an extended series of feature articles, where we look back on various games that Suda-san has been involved in, and detail what makes them significant and unique to Suda’s vision. Further, we’re also going to feature interviews with various other creators that have worked with Suda over the years… and that’s all leading up to my third meeting with the man himself at Tokyo Game Show this year. I hope.

Let’s take a brief moment to look at two smaller and sometimes overlooked entries in Goichi Suda’s catalogue: two small scale shooters with a lot of narrative depth underneath solid gameplay. The first one, Liberation Maiden, was developed by Level 5 with input from Suda, and released on the 3DS. It’s about a schoolgirl/President of Japan turned giant mecha pilot fighting against an invading army known as the Dominion. The second is Sine Mora, a joint collaboration with Digital Reality which describes the complete annihilation of a race of time travelling mystics known as the Enkies at the hands of the Empire. While most shooters aren’t known for plot development, both these games deal with issues of war and invasion in unique ways and challenge the player to think about larger issues while they’re weaving through hundreds of bullets.

Before we analyse though, it would be useful to discuss the nature of invasion fiction – narratives that speculate on future wars and the downfall of the writer’s society due to foreign influence. As a genre, critics argue it began in Britain with the short story The Battle of Dorking, describing a hypothetical invasion of London. The story was written in response to political tensions in Europe in the leadup to the First Word War, and inspired the much more well-known story War of the Worlds by H.G. Wells. This literary movement gained incredible popularity, even reaching Japan, evident through the story Kaitei Gunkan, which describes a submarine used in a fictional war between Japan and Russia. The important thing to note about invasion fiction is that, like other forms of speculative fiction, it plays upon societal fears to create tension. Furthermore, said stories tend to be dangerously nationalistic, portraying the invaded country as the underdog and dehumanising the aggressors.

The genre is incredibly prevalent in the gaming medium as it lends well to stories about war, and of a small band of heroes defeating an enormous enemy. Games such as Homefront, Crysis and The Resistance, along with nearly every zombie game, show the fear of modern civilisation falling prey to an invasion by some kind of outsider. As a consequence these games also have the unfortunate side effect of promoting a fear of the other, making a central game mechanic out of shooting anyone that doesn’t look like you. 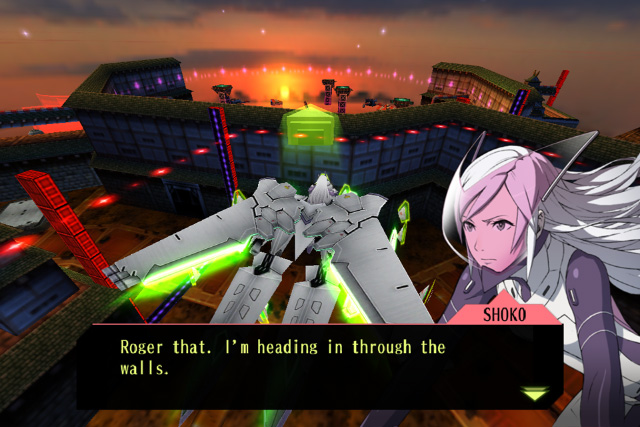 With that in mind, let’s see how this plays out in Liberation Maiden. Just from the opening cinematic, you get a sense that this isn’t going to be your average shooter. The protagonist, Shoko Ozora, is the newly elected President of Japan after her father’s assassination. Her first act as President is to hop into a mech known as Kamui in order to fight back against the Dominion, a gigantic faceless army which has planted energy-sapping Spikes into the ground to steal Japan’s natural resources. Anime tropes abound as bright J-pop music sets the tone for one of the most upbeat games about war imaginable.

While the gameplay is standard shooter fare, everything is designed to emphasise the theme of invasion. From the aerial mech you get a bird’s eye view of the Japanese landscape and all the foreign tanks, ships and trains that have dominated the otherwise pristine natural landscape. The Dominion forces are designed to reflect the ideals of industrialism and are visibly artificial and parasitic. By comparison, Kamui’s attacks are able to generate foliage upon impact and is said to be powered by Japan’s natural geomagnetic energy. This all comes to head in the final boss, which is a beast taken straight from Japanese folklore whose power is being sapped by the Dominion’s Spikes.

Another key theme of the game is self-sacrifice. Kamui is surrounded by little shards that serve as your shields but are also fired off as your weapons: thus, every attack you muster takes away your ability to defend. Furthermore, to destroy a Greater Spike, Shoko must activate the aptly named Sacrifice Drive, whereby spinning the stylus on the 3DS touch screen guides Shoko and Kamui to pierce the armour of the Spike with their own bodies. This sacrifice gets recognised at every turn too, as citizens of Japan will take to the social networks after being freed to let you know just how much they appreciate you. 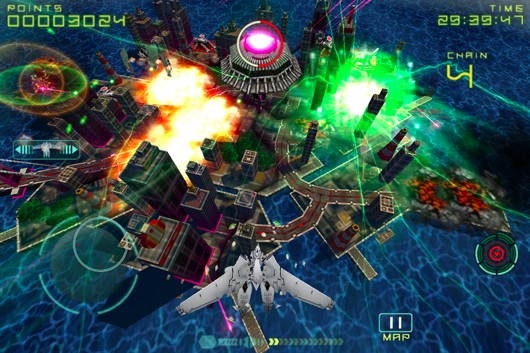 From these developments, it’s easy to make an argument that Liberation Maiden pokes fun at the conservative right who see foreign influence as a force with the power to defile Japan. For these critics, Shoko is an unlikely yet perfect hero: a girl engaging in self-sacrifice to fight back against Japan’s enemies, and every part of the game’s mechanics makes it abundantly clear. But despite being a game about war and invasion, Shoko is clearly a pacifist. She is enraptured by the beauty of the natural landscape after each successful destruction of a spike, and it’s a combination of this and the adoration of her electors that drives her to each subsequent victory. There is no joy found in aggression, but rather restoration, and the final boss is not a coup de grace to the Dominion but rather the freeing of an innocent creature from forces who wish to use it for evil. With this, Liberation Maiden becomes a reinterpretation of the invasion genre, telling a tale of positivity with a little help from every anime trope in the book.

Moving on to Sine Mora now, we start to see the darker side of invasion through a story that marries Aristotelian tragedy with time travel with about the same level of surrealism. Sine Mora is set in a dieselpunk alternate reality with lots of creative liberties taken regarding world-building and universe logic. The bullets and explosions come by fast and the boss encounters are cool enough that you’ll never question the actual military practicality of a runaway steam train that’s armed to the teeth. The game’s central motif is time: both in the gameplay and the story. While you’ll be deciphering time travel paradoxes in the latter, the former uses continuously depleting time as your health bar, letting you earn back time as you kill enemies. It all comes together to create a frantic atmosphere which justifies split second decisions in the face of adversity.

The main story again concerns invasion, revolving around the events immediately before and after the genocide of a time travelling race known as the Enkies at the hands of the Empire. The Enkies are a race grounded in tradition, with each member of its race knowing the exact date and time of their death. Time travel in this game is defined as being able to travel along one fixed timeline, and it’s implied that the universe tends to force the travellers into stable time loops whether they like it or not. 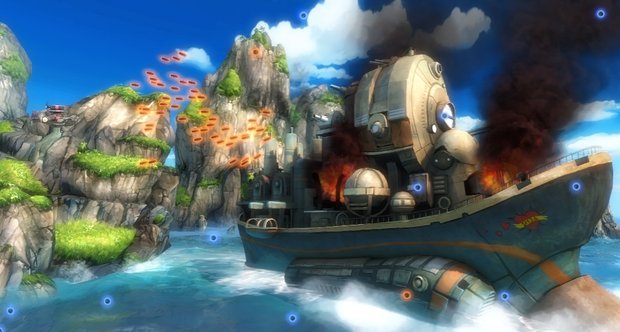 Enter Koss, an alcoholic and remorseful pilot whose son, Argus, was killed in the Empire’s attempt to wipe out all the Enkies. Argus was supposedly executed by a co-pilot after he refused to drop a nuclear weapon onto the Enkie stronghold, and Koss has made it his life’s mission to find and kill all those responsible for his son’s death. A noble cause this is not, especially since Koss blackmails an Enkie woman with a traumatic past to go back in time and facilitate his attack on the Empire. Playing as Koss is an odd experience; his actions are clearly reprehensible and yet the player is positioned to feel a little remorse for him. Bloodlust and blackmail aside, Koss is one man against a near insurmountable army and shooting down swathes of enemy ships is still fun.

Eventually though the fun of shooting down unnamed gunships comes back to bite the player; it’s revealed that most of the people Koss shot down were innocent and his last target turns out to be Argus himself. Without knowing that the rebel fanatic who tore apart much of the Empire was actually his father hell bent on avenging his faked death, Argus shoots down Koss. In a similar vein, the game’s B-plot follows Akyta and Lynthe, two Enkie survivors who try to fight back against the Empire whose actions ultimately facilitate the complete destruction of their race.

Even though the story is framed around multiple attempts to send characters back in time to fix things that went wrong, it’s the impassioned yet murderous intentions of the characters which impede their progress. In every permutation of time, the Enkies are wiped out, the father son duo of Koss and Argus die ironic deaths at the hands of each other and the side characters pass away too seemingly just to kick the player while they’re down. If Liberation Maiden gave a positive view on pacifism, Sine Mora is all about the harsh realities of war and how revenge and honour, as powerful a motivator as they may be, lead to rash decisions and an unfavourable end for everyone involved. 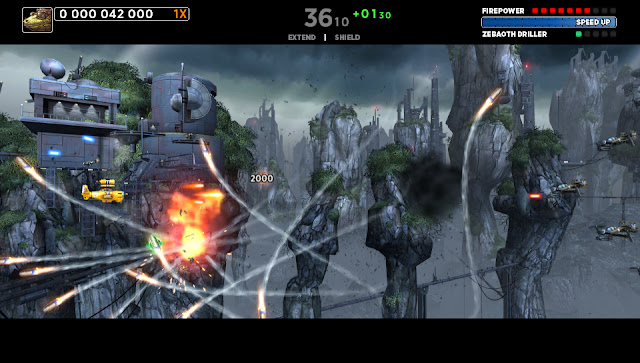 Through these two games, we see a natural renewal of Japan and a timeloop doomed to end in genocide and tragic downfalls. In their two forays into both the shooter genre and the invasion narrative, Suda has deconstructed the invasion narrative to tell two very unorthodox stories. These two games delve into specific personalities involved in large scale conflict in order to redefine the use of war as a narrative framing device, inviting players to think more deeply about their actions while playing.

DDNet in Japan #9: I do the boasting thing about Akihabara