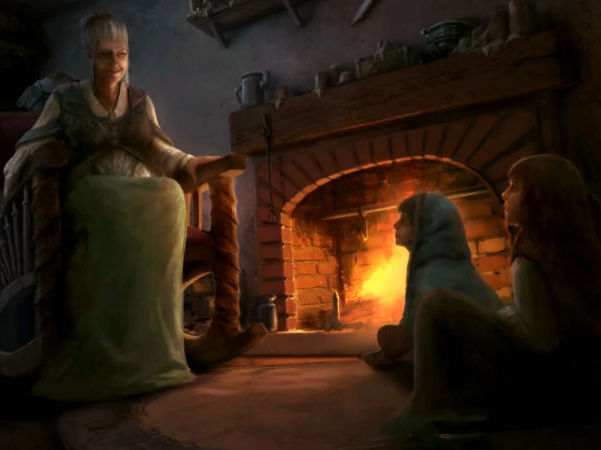 You’re probably going to go into The Huntsman: Winter’s Curse with some guarded expectations and reservations. After all, the movie franchise has been a less-than-spectacular IP. Heck, let’s call a spade a space – the awe-inspiring figure of Chris Hemsworth aside these films are the very definition of blockbuster trite. The history of licensed video games is checkered enough when the source material has been incredible, let along a licensed game trying to play off a middling film series in the first place.

But against all odds, the developer has done a good job with this one. It’s not going to be in contention for those game of the year awards, but developer, Desert Owl Games, has a beautiful art style and combat system, and it’s intensely playable as a result.

In this game, you play as Elisabeth. A pile of modern fairytale cliché, Elisabeth is a woman that learned from a young age how to defend herself in combat. When her brothers all go missing, she sets out on a quest to rescue them… or at least figure out what happened to them. Aside from inverting the damsel in distress plotline that is so common for fairytales, The Huntsman: Winter’s Curse plays the fairytale structure right down the line, with haunted forests, beasts transformed and controlled by magic, evil existing for the sake to do evil, and the odd morality tale thrown in along the way.

This story is told through snippets of dialogue and action that bookend each “scene” that you’ll experience on Elisabeth’s journey. Movement around the world is not free – rather you’re presented with a map that has key locations scattered around it, and you’ll select a location to move to, based on the currently available quests and sub-quests. After selecting a location (and quest) and one of these locations, you’ll read through some text that describes the scene, and then you’ll either have some combat or decisions to make. At the end of the scene you’ll earn experience and rewards, based on how things go.

The effect the developers were aiming for is clearly similar to something like the Lone Wolf game, which I was quite enamoured to when it landed on the PlayStation 4 a few months back. This one doesn’t have the quality writing of Joe Dever to back it up, and instead reads like a fairytale that could have used an edit; not for grammar or spelling, but rather to try and establish a more engaging pacing and delivery. Sentences are quite clunky at times, and there are a couple of moments through the quest where stuff will apparently happen in the background, but you’ll be left wondering what’s going on until a conversation down the track refers back to previous events. For the most part it’s perfectly workable, but it could have been better.

Decisions could have had more impact, too. When the narrative does pause to give you a couple of different options on how to respond to something, I never really felt like I was having my morality tested with the decisions that I was presented. Nor did I feel the consequences were so severe that I needed to carefully weigh which decision I would take from a gameplay point of view. As best I can tell, the decisions you make have a localised impact on the current scene – either changing the enemies that you’d be facing, or the rewards you’ll gain in return for completing the scene. 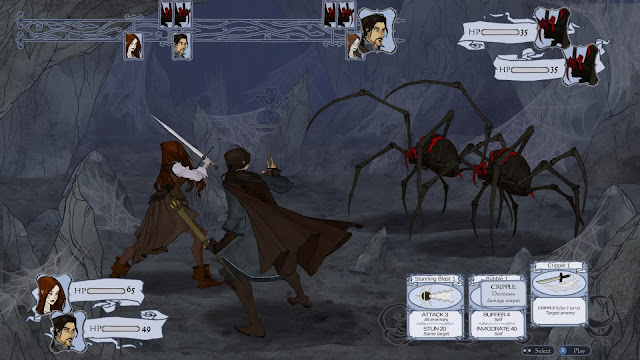 But to compare to another game that heavily plays on fairytale conventions – The Banner Saga had a near-magical ability to make every decision a wrenching one, whether it be to leave you questioning your sense of morality, or because you feel constantly in a state of perpetual no-win situations. The Huntsman: Winter’s Curse had the tone and narrative potential to follow suit, but for the most part when you’re called on to make a decision you’ll feel like it’s too straightforward or inconsequential to make much difference, regardless of what you choose.

What really drives The Huntsman: Winter’s Curse forward is the combat system, which is entertaining from start to finish. It’s a turn based combat system in which, on each turn, your character will be dealt a hand of cards, from which he/she can choose one to either attack enemies, or heal/support the allies. That hand of cards is generated from equipment, with each piece offering one or two different abilities.

This is a really elegant system. Better equipment won’t improve your chracter’s statistics. Rather, the cards that that piece of equipment gives your party will be better with better quality loot. What’s great about it is that there are so many good pieces of loot that you can spend a lot of time tweaking your equipment loadouts so that the heroes are both quality fighters as individuals, and able to support one another. This is substantially different to most RPGs, where you’ll just pick whatever set of equipment gives you the best statistic boosts. 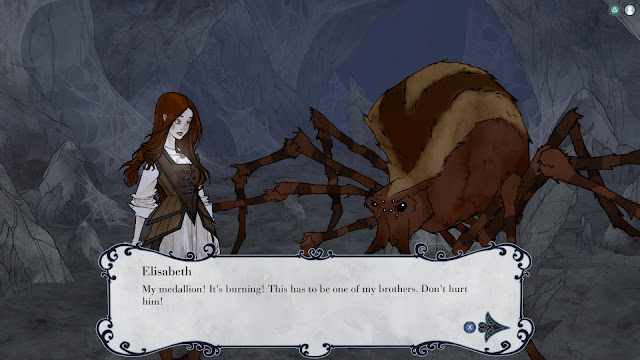 The Huntsman: Winter’s Curse isn’t a necessarily difficult game, but it can punish poor strategy. Enemies tend to have a lot of health, and can do quite a bit of damage to characters, and so simply trying to out power them is often inadequate. Instead, you’ll need to make heavy use of abilities that stun or slow down enemies to ensure that you get more turns in combat than they do. Healing and buffs are also essential, and while this system tends to mean that combat drags on, I vastly prefer something like this where I need to be adaptive and occasionally make do with a bad hand than something where I can simply spam a proven series of powerful attacks to the defeat of whatever horde of enemies I had run into.

Supporting the game is a gorgeous watercolour aesthetic, that looks the very picture of a fairytale book’s art. The game’s enemies run the standard gamut of RPG opponents, but the design is that visually pleasing that each new enemy is something to look forward to. Something that might put some off is the limited animation that each character has in Winter’s Curse, which is especially evident in attack animations, but the visual style that it reminded me of was of a flipbook jumping between frames, and it grew on me throughout. The visual design is so consistent and original that I would be happy if many more games looked just like this.

The Huntsman’s greatest flaw is that it’s ultimately quite forgettable. You’ll remember having fun with the combat system, and if you’re anything like me you’ll remember enjoying the art style. Unfortunately (and a little like the films in this regard), the game simply struggles to justify itself as something unique or compelling within the context of being a modern reimaging of a fairytale. It really struggles to do anything with the conventions that it’s breaking, even though it’s clearly breaking them. The game simply struggles too hard to make you care about the characters or their situation, and an RPG without a compelling narrative is one that will always feel like it’s missing substance.