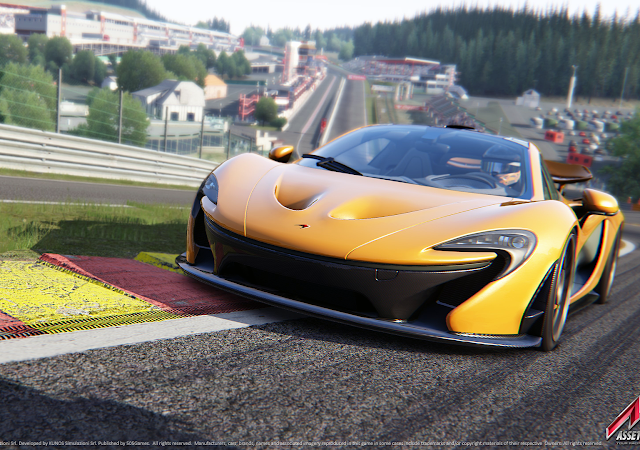 I have a lot of respect for the developers of serious racing games. The demands that the genre places on physics engines is extreme, and, worse (from the developer’s point of view), it is intensely noticeable when that physics engine is even slightly out, because that’s what speed does; it tends to emphasise small shifts. Serious racing game fans want to feel incredible when they nail a perfect turn. It takes a lot of work to achieve something that is felt rather than observed.

But there are many fine developers of serious racing games out there, and Assetto Corsa has tough competition ahead of it. Project Cars is already on the PlayStation 4, and it’s a superb racer. There’s the perennial favourite F1 series, and a new Gran Turismo on the way. This particular title, developed by Kunos Simulazioni, looks to stand out from that pack through a close focus on the cars that people most desperately want to drive; the kind of cars that Lamborghini, Ferrari and Alfa Romeo produce. And, while it doesn’t quite reach the greatness of some other racers, it does get the absolutely most critical detail right; hooning around in a Lamborghini an absolute blast.

In Assetto Corsa you’ve got access to bunch of famous tracks, including Barcelona, Monza and Nurburgring. There’s also vehicles from 21 manufacturers. Relative to some other racing games the car roster might initially seem thin, but that impression fades soon enough, because unlike almost every other racing game, just about every car in Assetto Corsa is actually worth racing with. A game like Gran Turismo forces you to spend time in junk on the way to unlocking better cars. Project Cars has a chunky roster which includes a bunch of vehicles that have no value and, years after playing for the first time, I’ve still never bothered touching. Assetto Corsa instead gets you behind the wheel of classic or favourite makes and models immediately, and after spending some time with that car you’ll want to test the others out simply because they all look so cool.


Each car has its own handling quirks, and while I can’t claim to have driven any of these cars in real life (sadly writers don’t actually earn the buckets of cash for our reviews that we often get accused of), their performance is believable. Most importantly, there is a real sensation of speed that builds up, once you’re good enough to actually put some weight into the pedal. The thrill of hitting a turn just right, and coming out of it at a screaming speed, is genuine, and the developer clearly spent a lot of time really working on the feel of acceleration and turning.

As is expected of serious racing simulators now, you also have very granular control over the car’s performance, and can tweak a massive range of settings to arrive at a configuration that you’re comfortable with. It’s never something that I’ve played around with too much, as I generally find that the defaults are adequate for the way I like to play these games (i.e. I like getting out there on the track and racing), but I know tweaking engines is a big part of these games for others, and I think you’ll find yourself well-serviced here. Not as much as Project Cars, perhaps, but more than enough nonetheless.

The cars themselves are gorgeously rendered, as are the tracks, within the bounds of the track itself. In replays, with the dynamic camera angles and light reflecting off the vehicles as they zoom around, Assetto Corsa looks as good as any other racing game out there. Where the budget shows is in the more superfluous details. Crowds in a track’s stadium look poor by the standards of PlayStation 2 games, and while the trees cast beautiful shadows, the trees themselves aren’t going to appeal to horticulturalists.

More seriously, though, the cars themselves don’t interact very well with the spaces around them. Taking a corner too fast will tend to send your car into the rough, and while you’ll certainly feel like you just made a mistake because the controller’s rumble goes into overdrive and there will be a complete loss of control over the vehicle, the visual impact of having a supercar dragging itself across the dirt is minimal.

Further, in real life these cars would look absolutely spectacular if they collided with one another. It would be a horrific kind of spectacle and you’d certainly hope the drivers weren’t harmed, but at those speeds, the flying metal and raw damage the vehicles would inflict on one another would be spectacular. In Assetto Corsa the effect is more akin to a little bump. A bump that is poorly advised from a racing point of view, because the fallout almost never turns out well and will likely push you into the dirt, but the sense of impact from collisions was lacking.

The core racing is hard to criticise, however. The controller positively hums with a constant rumbling, which is both noticeable (and that’s saying a lot as I don’t usually notice the rumble effect when playing games these days), and visceral; I immediately felt that I was in control of powerful cars from the moment the race kicked off. The tracks themselves are spot on, and playing through the cockpit view, it’s easy to get an appreciation on how challenging some of them really are. The slightest incline, hiding an upcoming corner, can utterly ruin your race, because there’s very little leeway to overshoot when corners are concerned. I’ve played on most of these tracks in past games, of course, but even then I felt the need to get some good practice in before I felt confident taking on proper races. 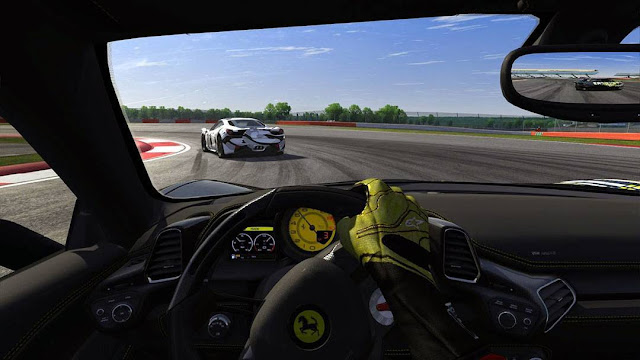 The standard bevvy of play modes are there, and will suit most styles of play. Most people will get the most value out of either the online play (which works perfectly fine insofar as I’ve been able to test it) and the career mode. But, for people looking for a more solitary experience, there’s both a hot lap mode (where you need to set the fastest time for a track that you can), and time trial, which, appealingly, has an arcade racing touch to it – you’ll earn points by getting through checkpoints as a timer slowly counts down.

Really the appeal of Assetto Corsa is in taking control of Lamborghinis and Ferraris and racing around tracks that are really beautiful for high precision cars that have good acceleration built into them. It’s far more focused on what it does well than many other racing games, and unfortunately the overall package suffers a little as a consequence, but I just can’t get over how much I accelerating out of corners in this one.

One of the best Aussie games is console-bound!