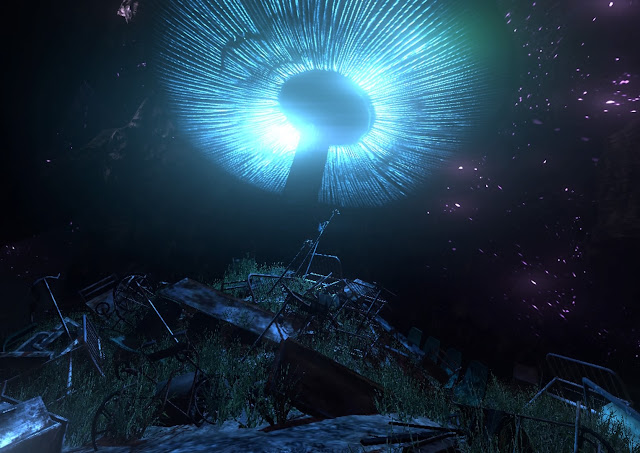 There’s been a welcome surge in first-person adventure games in recent years, but there are still pockets of the community that write these off a “walking simulators” and argue semantics about whether or not they actually qualify as games. Most such games are content to just shrug off these criticisms and play to their narrative strengths, while others, like The Witness, have puzzles built into the core to enhance the experience (and for some, its credentials as a game). Then there are games like NERO: Nothing Ever Remains Obscure that give in to the need to be more traditionally game-like, and lose something in the process.

As a story game, NERO is something quite special. It tells two stories side by side: one is a fantastical adventure spanning enchanted forests and mysterious caves; the other, set in the real world, is a harrowing account of the loss of a loved one and the impact that that has on a family. These seemingly disparate stories are actually quite closely woven together, and seeing them weave together as you make your way through the game is a remarkable experience. A bleak, depressing story is injected with a sense of wonder, and that contrast serves to make it all the more powerful.

These tales are told through snippets of floating text found throughout the game, with different colours marking which story a particular phrase relates to. Key details are unmissable, but you’ll have to go off the beaten path a bit to see all there is to see and get the full picture of what’s going on. It’s a clever idea that blends adventure and exploration with the linearity of a visual novel in a neat way, and that helps you get swept up in the world and the stories being told. 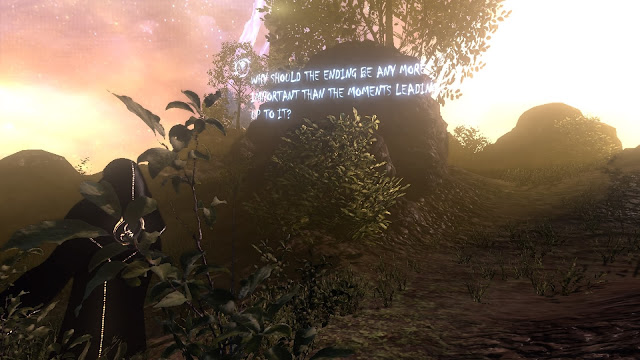 And then there are puzzles. Throughout NERO, simple logic puzzles will halt your progress, tasking you with using a light projectile to light up certain beacons, step on switches to open gates, and so on. Few of these are particularly difficult, and those that are gain their challenge from being vague about what the actual goal is, rather than being difficult to solve – I found haphazard trial and error to generally be sufficient, but after even having “solved” these puzzles, I rarely knew what I had done to reach that point.

Rather than involving the player in the game, they serve as jarring distractions that, somewhat ironically, make it harder to bond with the characters and relate to the story being told. Between the world building, writing, and music, the story being told is more than capable of standing on its own without shoehorned “interactivity” to make the player feel important.

In fact, I’d say that one of the greatest strengths of NERO is that, puzzles aside, the player isn’t important. Sure, you control an important figure within the narrative, but it’s the kind of story that you, as a player, witness as an outside observer. Your role is to witness the telling of a tale firsthand by piecing it together, not to be in the director’s chair. 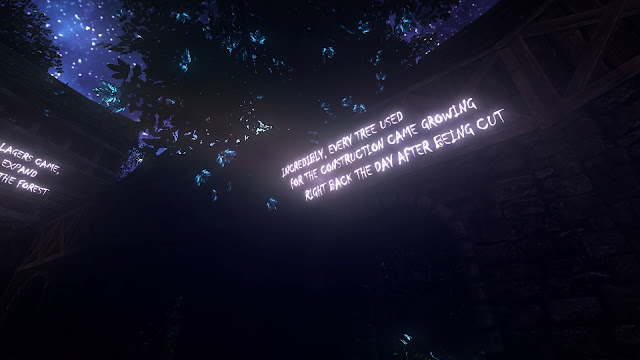 This is important because NERO is an intimate and moving story that feels almost autobiographical at times. It’s heartfelt and heartbreaking, but this largely comes from the fact that it isn’t your story; the power of it is driven by empathy more than anything else, and being something of a passive observer of the events of someone else’s life is a key component of that.

As a story-focused first-person adventure game, NERO is quite remarkable. It’s surreal, heartfelt, bittersweet, and thought-provoking, and that should have been more than enough to carry it without the need for shoehorned-in “gameplay”. As it is, it’s a very good game, but it would have been so much better if it hadn’t tried so hard to avoid the “walking simulator” criticism and just ran with its strengths.

On the social, cultural, and moral implications of Augmented Reality (AR)