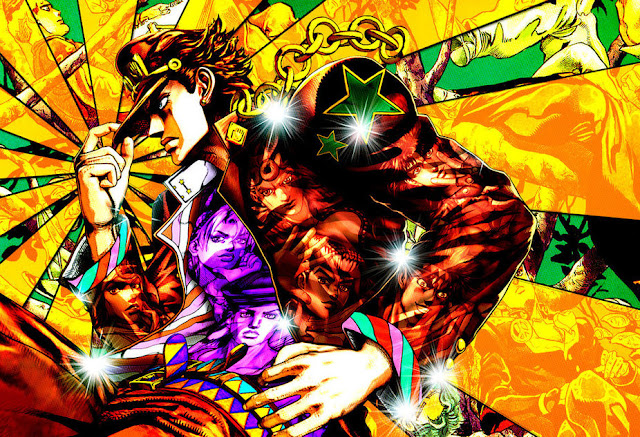 It’s been said ad nauseum that fan service-driven anime games don’t have a broad demographic. Even so, the way JoJo’s Bizarre Adventure: Eyes of Heaven threatens to perplex potential buyers is downright impressive.

See, many games that revolve around anime and manga throw a lousy two paragraph synopsis at the player before unceremoniously shoving them into the deep end. When a newcomer boots up, say, Bleach Heat the Soul, an introduction abysmally explains the Bleach universe and expects the player to follow seemingly random circumstances while ill-defined characters spout meaningless phrases. Conversely, because the story is only truly understood by players accustomed to the source material, players grow attached to the character roster itself. Simple but addictive fighting gameplay means people will become familiar with the many charismatic fighters quickly and from there the game functions as a shallow but pleasant advertisement.

JoJo’s Bizarre Adventure: Eyes of Heaven, meanwhile, puts its tale first and foremost. The problem is that, without the requisite 600 or so chapters of knowledge, listening to it may somewhat dilute future reads of the manga. We’re not talking minor spoilers like a big bad’s final form or the fact that a protagonist inevitably triumphs over evil, but countless permanent character deaths and relationships. I’d surmise the minimum required to get any value here is to see the entire anime, which will get you about halfway up to speed. 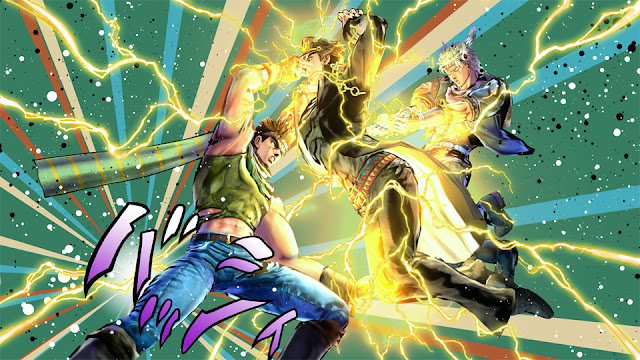 The story literally opens by spelling out which three main characters died at the end of the franchise’s third instalment and thrusts the player into one of the most iconic battle shounen fights: Jotaro Kujo versus Dio Brando. This scene has been around for decades and hit meme status, so it’s hardly breaking news. From there, though, the structure of the narrative requires it to spoil just about every major death in the series. The orchestrator of the game’s events revives the souls of the Joestar lineage’s deceased allies, which means it’s rather obvious to even casual fans which ones bite the dust.
If one can Standsuch spoilers (pardon the pun), the game’s plot is reasonably engaging by cornball JoJo criteria and when contrasted with oft phoned-in plots of anime games. Serving as an epilogue of sorts to the popular Stardust Crusaders plot, it ties up several loose ends whilst expanding on lore in a meaningful way and, on occasion, is legitimately comedic outside of the obligatory winks and nods at fans. Overseen by author Hirohiko Araki himself, it wonderfully strings together not just a plethora of characters but various iterations of recurring faces.
And while the story route Araki approved is alienating, I applaud him for stamping it with his seal of approval; the dimensional shenanigans here accentuate JoJo’s strengths as a series. Unlike just about every other popular fighting anime/manga around, JoJo wholly reinvents its plot, settings, and characters on a dime. As a result, you’ve got nearly a dozen stories that, while technically connected, can simultaneously stand alone. The result is an all-star cast that feels like a grandiose crossover in the vein of J-Stars Victory VS, yet it’s all just one man’s franchise. Eyes of Heaven also allows players to witness legitimate interactions between characters that never would have met otherwise. Even if not all these meetings are fully realised, the scenarios themselves are at least fulfilling in a light and fluffy kind of way. 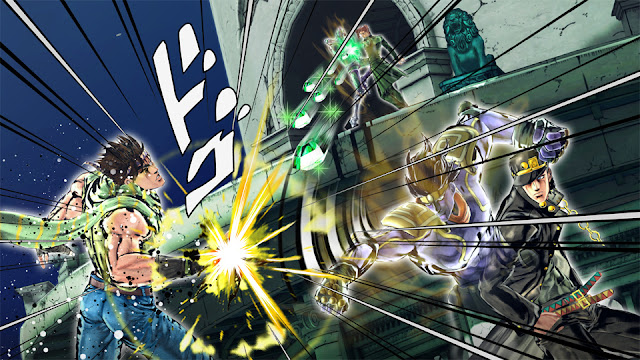 So yes, that means Joseph Joestars can exchange inter-dimensional “Oh, no”s, a young Jean Pierre Polnareff can enter the Vento Aureo storyline prematurely, and Jonathan Joestar can meet his many descendants. Witnessing Hamon (a sort of mystical martial art in the JoJo universe) users square off against Stands (manifestations of a character’s soul with personal abilities) is particularly gratifying since the former power went extinct early on in the series’ chronology.
From here, the game flexes its muscles as a JoJo game rather than an as actual fighter. As far as mechanics go, this is no traditional traditional 3D experience like previous outings, but an open-ended 3D arena fighter where players are given ample space to duke it out. While fighters only have two main attack functions, these are supplemented by a glorious concoction of gimmicks and downright clever character-exclusive systems. The avian Pet Shop can soar, young Joseph Joestar can whip out his American clackers, and Geb sacrifices mobility for long-ranged attacks. The game’s basic controls aren’t immediately accessible because so many characters boast these mold breaking assets, but I suspect anyone who invested hundreds of hours in the series will gladly put up with a learning curve. What fan can resist the reward of over-the-top finishing sequences and combo animations rife with that glorious JoJo cheese?
When applied to a single player campaign, these battles take a while to get going, unfortunately. There is a level-up system tied into the story campaign that should, in theory, make battles deeper, but it feels more like a handcuff early on. Because enemies get knocked down extremely easily and moves are slow until you’ve sufficiently buffed a character’s stats, it’s tough for newcomers and veterans alike to rack up decent damage or get into a groove. Besides this, it feels like some characters are so fundamentally different as to affect the game’s balance. I don’t fancy myself a frame-by-frame fighting game analyst, but certain characters are downright better suited to these sorts of 3D arena battles. 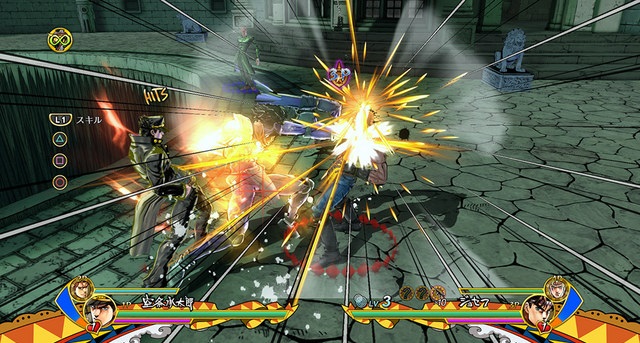 In many other respects, Eyes of Heaven is reminiscent of the aforementioned J-Stars Victory VS. Battles are primarily team-based and utilise the same underlying systems. I must say, however, that the stages here are so much more inspired and utterly ace the fan service element this game desperately needed. For starters, arenas are wonderfully dynamic. Here, you’re frequently interacting with unique elements of each stage such as hidden spikes, towers, and trains. Most feature vertical and horizontal “layers” to allow for varied tactics depending on location. As for the aesthetics, they all look as if they’ve been swiped straight out of the anime and I mean that as high praise. Even the less practical stages teeming with pitfalls seem legitimately inspired.
After each bout, Eyes of Heaven manages to appease fans further. Depending on which warriors you’ve paired up, there’s a chance you’ll catch some team-specific banter. This provides hefty incentive to tinker with all possible combinations during the story campaign rather than abuse the most pragmatic duos. Even loading screens are worth a chuck, jam-packed with goofy quotes from every part of the series.
While the game is a serviceable 3D fighter, I found it hit its peak when acting irreverent and ditching genre conventions. Story mode features several quirkier tasks outside of traditional fights such as zombie slaying and chasing down spirits that drop various trinkets. The highlight is a game of poker against D’arby the gambler, wherein Jotaro Kujo tries to outfox a master swindler in hilarious battle of bluffs. It’s a shame that hub worlds are criminally underutilised; exploring worlds choc full of characters and witty banter would have been so much finer than simply reusing battle maps and pasting two or three points of interest on them.

JoJo’s Bizarre Adventure: Eyes of Heaven isn’t going to send a ripple through the video game community, but it was never intended to. As a simple little love letter to fans, it succeeds despite its faults and the lofty requisites to truly treasure it.