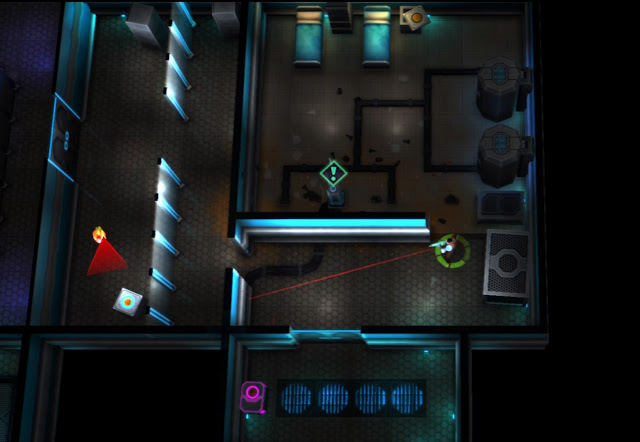 Maybe it’s just because I’ve been spoilt by this industry’s current fascination with ‘80s-inspired retrofuturistic settings, but with a name like “Neon Chrome”, I was expecting something far more garish than what this top-down, twin-stick shooter delivered. I was expecting to be inundated with fluro pinks and purples and thumping electropop music; instead, what I got was a game that was rather muted. This feeds into my main issue with Neon Chrome: for all its promise, it doesn’t quite commit to its great ideas as well as it could, so a game that should have been impossible to put down ended up being one that I grew weary of quickly.

Related reading: Hamza’s review of the PC release of the game.

In a dystopian, cyberpunk future, the powerful Neon Corp runs Neon Chrome, a towering vertical city where the millions of residents trade freedom for a comfortable life. You play as a hacker who wants to liberate the city’s people by taking out the Overseer who rules over Neon Chrome, but rather than doing it yourself, you hack into the brains of cryogenically-frozen people and remotely control their efforts to fight their way up the tower.

It’s a great premise for a roguelike game, because like Rogue Legacy, it creates a sense of continuity between playthroughs. On a mechanical level, credits you earn in each run can be put towards permanent upgrades for the “assets” that you hack into; on a narrative one, there’s a sense of working towards a goal that’s greater than each individual attempt. Death isn’t failure, but a step towards success. 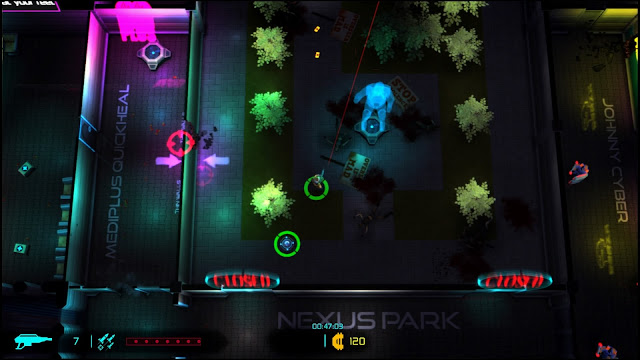 The problem is that, even with this setup , I had very little motivation to keep retrying. Levels are procedurally generated so that “no two paths are alike”, but there isn’t enough distinction, in terms of visual design or the components that feed into the layout design, to make each level actually feel unique. “Assets” are just that—assets that you control, with no sense of personality or character. Upgrades are very incremental, so you rarely get that sense of excitement from a new skill that you just have to go out to try.

With all that said, Neon Chrome is still fun to play in bursts. It’s a fairly typical twin-stick shooter, with your standard array of guns and more powerful, limited-use special weapons like homing rockets. Breakable walls and explosive devices litter the maps, giving you options for taking a more tactical approach to combat, and if you should get an asset with a stealth perk, you can even take a more sneaky approach Objectives vary, from simply getting to an exit point to taking out a series of targets, and along the way you’ll find (temporary) cybernetic upgrades, weapon mods, and cash to spend on the permanent bonuses.

So there’s definitely a lot of excitement to be had in Neon Chrome, it just doesn’t have that “just one more try!” aspect that its premise led me to expect. The levels aren’t quite varied enough, upgrades not quite exciting enough, and gunplay not quite explosive enough to really drive that urge to keep playing until, before you know it, the sun’s come up. 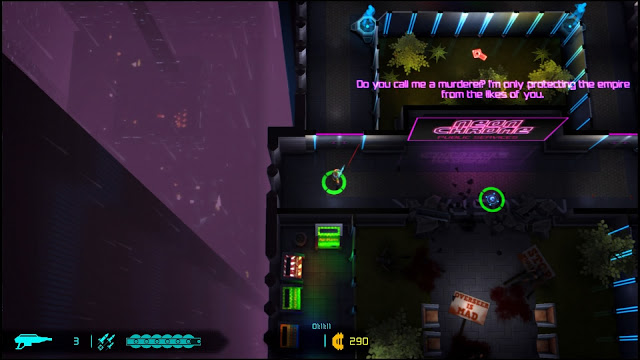 I’d also put this down to the rather gloomy atmosphere I mentioned at the start. While there are certainly splashes of colour – explosive objects all glow orange, for example – the game is generally quite dark. It’s an aesthetic that suits some games, but I just don’t think this is one of them. This leads to a functionality issue as well, because it becomes difficult, for example, to tell which walls are breakable, or to distinguish between different enemy types. A small and difficult-to-read UI certainly doesn’t help.

Neon Chrome certainly has its charms, and it can be a lot of fun, especially if you bring some friends along. At the same time, I feel like there’s a lot of missed opportunity here. The “succession planning” mechanics add depth and a sense of progress to the roguelike aspect of the game, but not enough to incite the obsessive “just one more try!” feeling that this genre needs.