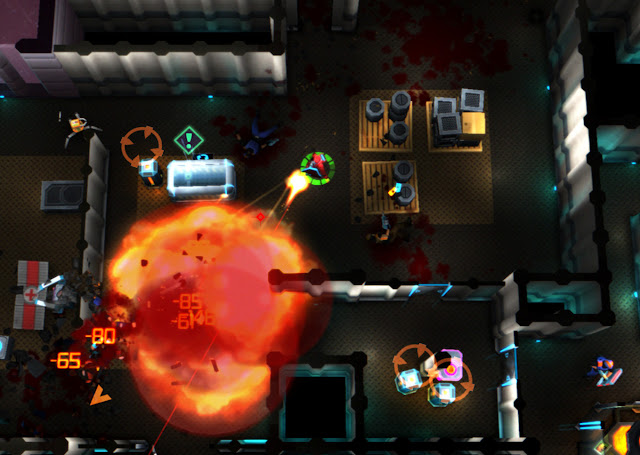 A top down rougelike that involves upgrading, shooting, hacking, and a randomly generated level each time you get terminated? While I normally turn down a game that fits this description, Neon Chrome got my utmost attention from the very beginning. And by beginning I mean straight by its cool-sounding title. Just one look at it and I knew what lay behind that title was a neon-drenched, over-saturated, glowing, retro-futuristic world. A world I had to experience for myself. And I wasn’t disappointed. At all.

Right off the bat the inspirations behind the look of the game is crystal clear: Neon Corp, the megacorporation behind the titular arcology of integrated virtual systems, is obviously modeled after the iconic Tyrell Corporation building from Blade Runner. Indeed even the typefaces used are distinctly sci-fi (the main title uses a modified version of Taskforce; elsewhere the ever-popular Ethnocentric is used for an in-game company). The gameplay itself is quite reminiscent of Hotline Miami, minus the twitch factor. You can draw your own comparisons to similar top-down shooters but then you’d be missing the whole point: Neon Chrome is not about bringing new and exciting elements to the table, but rather applying a new coat of fresh paint. In this case, paint that is emitting rather large doses of colorful bloom.

You play as a hacker whose able to hack into the hibernating denizens of Neon Corp and integrate his consciousness to that of theirs. With a surprisingly complex backstory that involves awesome-sounding names like Overseer, Armocore, and CryoNix, suffice to say I got lost pretty quickly. However, understanding the story is not tantamount to enjoying the game as it basically exists to justify the respawning feature that this game in particular handles quite uniquely. But from what little I understood I have got to give credit to the developers for actually taking the effort to glue everything together with a plot; that almost never happens in this particular genre. 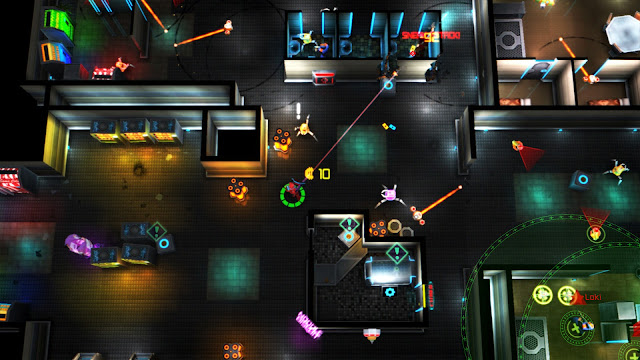 The gameplay focuses on clearing room after room of baddies and making it alive to the next level. Sounds simple enough, right? Believe it or not it actually is, but it is everything else that’s around this simple concept that makes playing it all the more wildly interesting. Since you are a hacker and are surrounded by futuristic technology, you get to engage in cybernetic enhancements (a posh way of saying adding more slots to your health bar), upgrade hitting power of your weapons, and choose from one of three randomised assets. In the world of Neon Chrome, an asset is a cryogenically frozen person. Due to a glitch in the system, the hacker is able to connect himself to any asset and take complete possession of them. Think something in the vein of The Matrix and you’re on the right path. Every asset has their own set of strengths and weaknesses: would you go with a shotgun-wielding asset who lacks in speed, or select the one with a small health bar but a regenerating shield? Because there’s no one ‘correct’ way of playing, these interesting mix of choices encourages experimentation and allows the player to come up with their own preferred combat approach. I personally always picked the most ‘balanced’ asset from the trio.

When you’ve died a couple of times and experimented with the wide variety of unique assets, you’d think the game would throw a different kind of curve ball somewhere down the line; that never happens. This did not, however, dampen the excitement one bit. I was just as head over heels after three hours as I was in the first couple of minutes. If you’re into the 80’s neon-filled culture and new wave music, then Neon Chrome might just very well be the perfect little game to play over the weekend!

Hands-on with The Witcher 3: Blood and Wine (DLC)