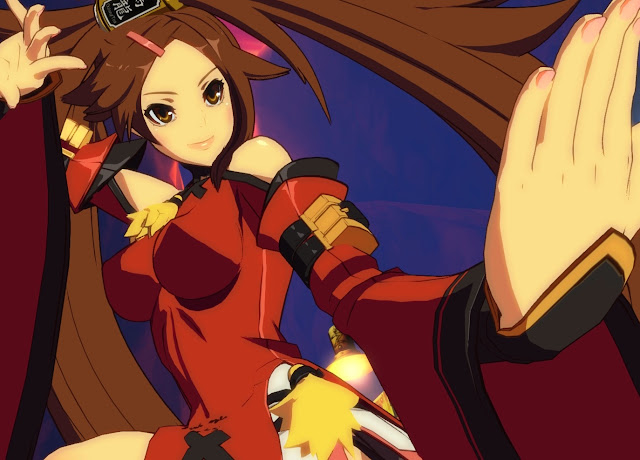 I had my qualms about Guilty Gear Xrd when it was first announced. After years of updates for Guilty Gear XX, this would be Arc System Work’s next generation for their flagship fighter. When the first entry of Xrd, -SIGN-, came out, it was met with divided reception from fans. This was a game which looked awesome and felt great to play, the 3D polygons perfectly modernising the 2D of the previous entries. The main complaints were that -SIGN- felt a bit barren and bare-bones for a fighter. So naturally, Revelator comes along and fixes all that, adding additional characters, even more graphical flair and a few extra game modes to toy around with. I’m sure people will complain about having to rebuy the updated version of the game, but let’s not think about that for a moment, and instead take the time to celebrate just how awesome this game series is.

Related reading: Matt’s review of the most recent BlazBlue release, Arc System Work’s other premier fighting game franchise.
Guilty Gear is by far the most odd contender in the market for competitive fighting games. While Capcom and SNK duelled it out in the 90’s for supremacy of the arcades, a humble guitarist-programmer named Daisuke Ishiwatari worked with Arc System Works to create a game which largely eschewed all the tropes the genre was headed towards. Guilty Gear is a series which plays it fast and hard, with an unabashed punk mentality, a crazy cast of unique characters and gameplay geared towards rewarding reflexes and aggression. Combo counts regularly string past 10. Heavy metal sets the scene on every vibrant stage. Anchors, pool cues, yo-yo’s and 2 metre long surgical scalpels become devastatingly effective weapons. And after all of that, the game still never takes itself seriously.

Mechanically, the systems resemble a much faster version of the SNK 4 button fighters like Samurai Shodown. Characters have a punch, a kick, a slash and a hard slash, with an additional Dust attack that deals heavy damage but has a long windup. Every character has a natural combo of punch -> kick -> slash -> hard slash, though the ranges on each attack varies wildly. In addition to a bunch of crazy character-specific special moves, each fighter also has access to three extra moves: the Roman Cancel, which stops your attack animation and momentarily slows time to allow for extra long combos, the Psycho Burst which is a combo interrupting back-off technique and a Faultless Defence, which allows you to block supers without even taking chip damage. In addition to a health bar, players have a tension bar which builds upon attacking and moving towards your opponent, allowing more aggressive players to have more options. For a game whose characters and story feel so erratic and spontaneous, Guilty Gear’s fighting system requires a particular amount of finesse. Mastery of the systems however allows players to experience one of the most exhilarating experiences in the genre. 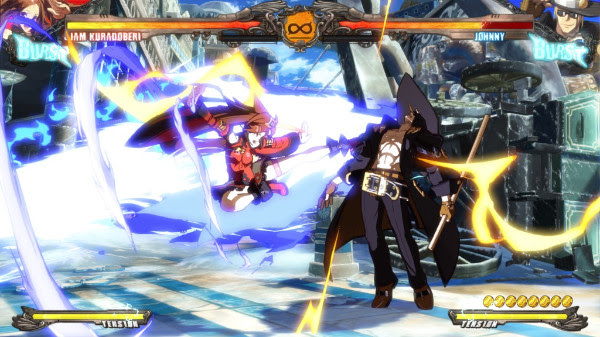 One of the main problems that the Guilty Gear series had was its esoteric combat systems riddled with bars and gauges, and Revelator goes to great lengths to remedy that. This game has one of the best tutorials I’ve ever seen in a fighting game, explaining out all the key mechanics and then providing environments for the player to gain confidence with them. The initial tutorial explains the use of the various movement options and the Roman Cancel, tossing the player into situations which show off how the ability is most useful. Furthermore, the training mode has a little virtual joystick to show you the exact timings you need to pull off the more complex combos. For one of the first times in fighting game history, getting better as a player requires neither trial and error or a friend to tell you what to do, making Revelator is a great entry point to the Guilty Gear series and the fight genre in general.

Once you’re confident in your skills, Revelator offers a robust Arcade mode, a RPG influenced survival mode (M.O.M. mode) and online play. There’s also a story mode, but there’s actually no fighting in that so we’ll cover it later. Arcade mode is what we’ve all come to expect from the genre – a 20-30 minute gauntlet of fights with a sliver of story before and after. M.O.M. mode is interesting, with a focus on collecting medals after defeating enemy fighters with certain modifications such as increased health or resistance to certain types of attacks. Using medals allows you to customise your characters very slightly in this mode, allowing for a quite deep single player experience, though I found it wasn’t as challenging as the M.O.M. modes from previous Guilty Gear games.

The online framework has markedly improved from -SIGN-, with lobbies being represented as a marketplace of cute avatars sitting at miniature arcade booths rather than -SIGN-‘s bare bones menus. This is great for finding players nearer to your skill level, but thanks in part to the fantastic tutorial the overall level of play is much higher as well. If the fight genre could ever be considered elitist, it’s here, where long button combinations and strange character mechanics are all barriers of entry for new players. 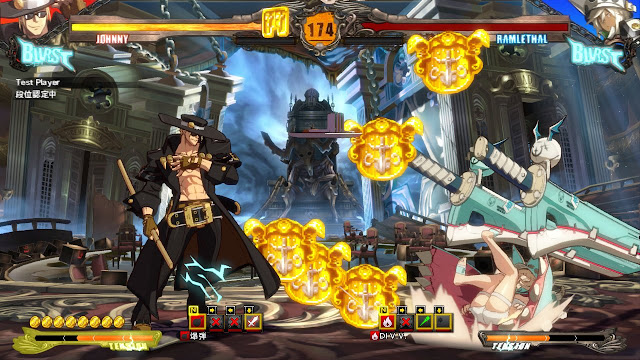 Revelator offers 22 characters, an sharp upgrade from -SIGN-‘s 14 . Newcomers include Haehyun, a Korean elder with a secret, and Jack ‘O, a strange tower defence inspired character. Series favourite Jam and Johnny return, along with Raven from Guilty Gear Overture. The more traditional swordsman archetype characters from the previous games such as Anji and Baiken are still not present, but an abundance of new trick characters such as Jack ‘O and Bedman gears the metagame more towards zoning and movement. Even classic characters such as Ky and May have been given additional mechanics which allow them to move or damage larger portions of the screen. There is a tier list but from what I can tell the characters are balanced enough that there are no clear advantages and disadvantages in public matchmaking.

Graphically, this is one of the best looking games you’ll ever find on the PS4. Now that we’re not talking about graphical fidelity or framerate anymore, the team at Arc System Works know just how to choreograph the action to maximise the wow factor. Little things like fight intros, zooms and pans during super moves and little facial expressions the characters pull go a long way to make the fighting dynamic. Attacks are also very visually distinct with just enough windup for skilled players to react and counter. As with -SIGN- before it, Revelator perfects the rendering of anime-style characters in 3D, somehow adding even more eye candy on top of an already amazing engine.

Once you’re tired of giving and receiving smackdowns, Revelator encourages you to relax with either the story mode or a fishing minigame. Let’s talk about the story mode first. Taking a page out of sister series BlazBlue, Arc System Works has decided to remove all the fighting from the story mode altogether rather than try to invent reasons for all the characters to fight each other. In a way, it’s a nice change as Guilty Gear’s world is rich and complex, with characters that have distinct motivations and vibrant personalities. Unfortunately, the story is also subject to a lot of confusing backstory established in previous games – the short version is that the world is set in a post apocalyptic landscape where magic has been invented, magic is illegal, a guy called “That Man” created biological weapons called Gears who then became sentient and waged war on mankind except only halfheartedly, and there are a variety of political-religious factions vying for dominance. And Jellyfish Pirates. All of this is summarised nicely in the GG World tab which is basically a glorified dictionary. When it dawns on you that you’re reading a dictionary to understand a movie that tells a story featuring the characters of a game about fighting, you’re really going to want to get back into the arcade or online modes instead. 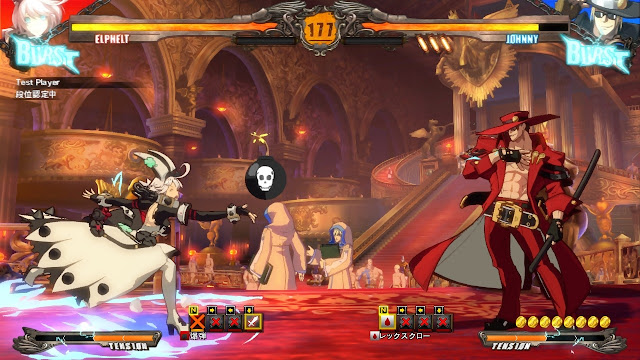 Furthermore, for a premise that’s so off the wall, Revelator’s story takes itself absolutely seriously. To it’s credit, the game manages to address some interesting questions such as the intrinsic moral compass of humanity and the control of power. On the other hand, I can’t help but feel that Arc System Works missed a narrative opportunity when they got together a fantastic cast of fighters and assembled them in boardrooms to use their words instead of their swords. Once the story does get going however, there are some fun moments that flesh out the main cast and every character gets a fair share of limelight. The result is a self contained anime-movie that’s rendered beautifully, with even some stylish action sequences towards the end, that doesn’t have a whole lot of relevance to the fighting game proper. It’s a nice add-in to the package, but it sure feels out of place.

The other non-fighting aspect to Revelator is the fishing minigame, which isn’t much more than pressing a button once the controller vibrates. The fun part is that it allows you to spend World Dollars, a currency earned from playing the fighting game modes, and spend it on little extras from the game. It’s possible to unlock a massive collection of character portraits, CG’s, little cosmetics for your online avatar, alternative colour schemes for fighters, voice clips and full music tracks from the history of the series. The latter is the absolute best feature – you can customise what songs you hear while playing online too! The Guilty Gear series has always been known for its rock and metal soundtrack composed in part by the director Daisuke Ishiwatari himself. This is one of those games where the music makes the experience what it is.

Guilty Gear Xrd Revelator is a fantastic fighting package offering lots to love for both series fans and newcomers alike. This is a flashy, modern fighter which boasts both gameplay depth and an anachronistic punk aesthetic. I do feel a bit spoiled by Arc System Works though when I think about how much content previous Guilty Gear releases aside from -SIGN- offered in terms of single player content. The lack of proper story modes and an M.O.M. mode which feels like an afterthought betray Revelator’s nature as a very rapid arcade port. With more updates, the Xrd franchise is sure to develop into an even more engrossing experience, but as it is Revelator already a whole lot of incentive to jump in.

Review: There Came An Echo (PlayStation 4)

It looks like Berserk Warriors has the violence down pat