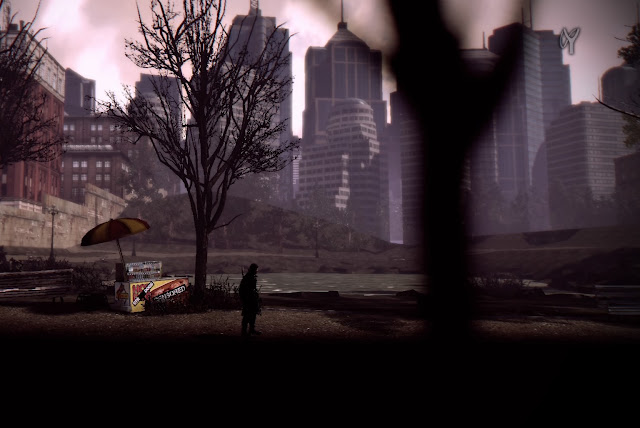 It’s 1986, life hasn’t been the best thing up until this point but you’ve just turned thirty-three, you’ve got a loving wife and daughter, that’s all that you need isn’t it? The radio and television sets keep mentioning rising tensions in Europe but give no details. Suddenly there’s nothing but an emergency broadcast and a sound of evacuation has been called. The apocalypse has started and your family has been evacuated before your could make it home. Travelling from Hope, British Columbia in Canada to Seattle, Washington, just under its border in the United States, this is the story of Randall Wayne traversing insane situations to be re-united with his family.

Deadlight, by Tequila Works, is a side-scrolling platformer that originally released back in 2012. Players returning to play this version will see enhancements in controls, visuals, and be able to explore a brand new survival mode where Randall finds himself trapped inside of a hospital with no clear way out. Newcomers, like myself, are in for a solid platforming experience that takes a hybrid storytelling approach that is both relatable, and will send shivers down your spine.

The idea of an apocalypse is scary but sometimes it’s not enough in itself to build atmosphere. Deadlight makes use of a clever silhouetting aesthetic to help make this particular apocalypse a tense one. Randall continuously has to move through spaces where Shadows, or “zombies”, can easily hide if their red eyes are missed. The survival atmosphere is gripping and engaging, and immediately will draw you into the world in demanding razor-sharp focus.


Saying that Randall is human doesn’t carry the weight that it probably should. Randall is a normal person who did not go out of his way to parkour or bench press his own weight at the gym. This is reflected in a lot of what can be done when dealing with the Shadows. Running, jumping, hanging from ledges, climbing ladders, and swinging a fireman’s axe found from an emergency escape all take stamina from a meter that isn’t very big to start off with. Performing any of these actions are very real choices to be made especially in certain situations as to whether it’s worth standing ground and fighting or moving as fast as possible to get to higher ground in order to plan out how to move through an area. Running out of stamina is very real problem that can lead to Randall’s death just as easily as failing to make it through some traps left by others or a crumbling building.

More than just the stamina, there are other choices that have to be made, such as whether the revolver or shotgun be fired to get through one situation or saved for later. Ammo is a very limited resource, and complementing that, both the revolver and the shotgun must be manually loaded one shell at a time and this greatly ratchets up the tension. Keeping track of how many shots have been fired is as important as keeping track of your surroundings.

Deadlight is more than simply silhouetted platforming. The premise and the story are never pushed off to the side in favour of the gameplay. Instead of this, while there is a fair amount of gameplay, there are many opportunities in order to set the controller down and enjoy cutscenes designed in a gritty comic book style. All of these scenes are voiced which only ever add to the overall experience. The colours used, and the choice for the animation, fit in with the background designs of the silhouetted foreground. Randall also has an opportunity to find missing pages to the diary that he was been keeping before the apocalypse started. This diary offers a view of his life events before everything turned upside down. 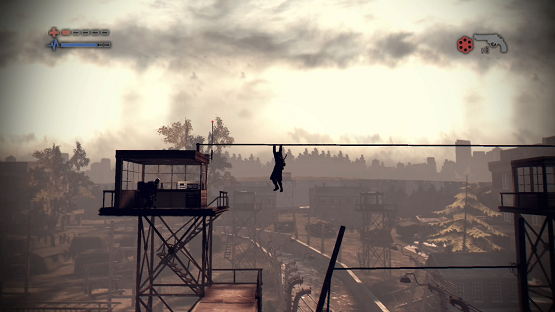 The entries themselves were brilliantly written and it shows that time was taken in order to make them sound genuine. Living in Canada there were parts of these entries that resonated a great deal with me, and while Deadlight isn’t a very long game, it is well paced through its three acts and it unlocks a harder mode once the story comes to a close. The narrative itself isn’t anything unique or stand-out, but it works well as a genre piece.

For die-hards, there is also a Survival mode that is honestly crazy in how it is designed. Trapped in a locked hospital Randall is going to need every trick in the book in order to make it longer than a couple of minutes. I got to five minutes and at one point was able to see on the leaderboards that I came into fifth place. Someone had made it upwards of forty minutes and I have no idea how. I suspect hacks, to be honest.

Unfortunately, for all the good setup, the game’s controls are frustrating, and in such a tense environment, this is simply not acceptable. The platforming itself is solid but when the action heats up, and you need to execute multiple actions in sequence, the slightly imprecise action means its possible to waste precious stamina repeating actions. I appreciate that Randall is a normal fellow and this kind of thing should be difficult for him achieve, but I believe this game strays to the frustrating more than the challenging too often for its own good. 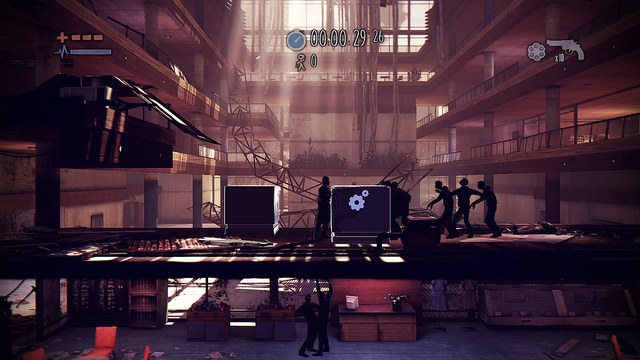 It’s not the longest game, and doesn’t offer anything that will be remembered as a classic game by any means, but the tense atmosphere, striking art style, and challenge, will surely help this game find itself a niche.

The Technomancer looks ace in this launch trailer

This week on the DDNet podcast: All about hard games!