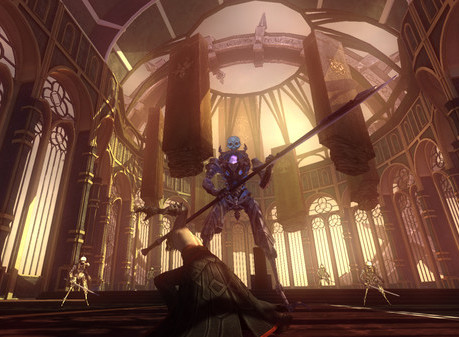 Occasionally a game will come along and in playing it you’ll develop a new appreciation for the masterpieces of the genre. In being overwhelmingly dull, these games are, oddly enough, worth playing, as they will highlight all the subtle things that the better games manage to achieve that we so often take for granted.

Related reading: An in-depth look at Nier, which this game oddly shares some thematic similarities to.

Anima: Gate of Memories is one such example of that kind of game. There’s nothing actually broken about it. But it is also a shade of the greatness that we have seen in other RPGs, and this is the more disappointing because there’s also genuine potential in it and a clear desire to do something good with the material.

In Anima, you start out as a young warrior maiden that’s on the hunt for a witch that she was formerly apprenticed to. That witch stole a book, and that book was an important one. I wish I could give further details, but I sit here to write this review a couple of days after completing the game, and I honestly struggle to remember too much more about the narrative than that. After the girl tracks down the witch, the narrative opens up, but I don’t even remember the girl’s name. I don’t really remember her opponents. I certainly don’t remember much about the demonic other half that the girl can turn into at will, other than that he’s the result of a bonding ritual to the girl, and pretty darned useful in combat.

I almost forgot that she’s accompanied by a sarcastic talking book. This was a feature that really intrigued me, since that book, coupled with the screenshots and video of the game I saw prior to playing it, had me the vague impression that the game would be like Nier. But Nier is a masterpiece of storytelling, and this one barely has a story to tell.

There’s a wealth of lore behind the game that has been slotted into the codex part of the menu; I do remember that. This lore shows that there has been real effort that has gone into the development of the world of Anima – a benefit of being based on a pen-and-paper game, I suppose. That’s why it’s so tragic that none of that effort that went into the lore coalesces into anything I saw on screen. Anima’s environments are levels. They’re mechanically sound, and offer some secrets to find, and there’s even some openness to how you can approach the game’s goals but they certainly don’t tell a story in the way that, say, Dark Souls leverages its environments to tell a story.

In Dark Souls you’ll see wide panoramas and know that in exploring them you’ll uncover details that leave you convinced that this is a world that has grown, and then fallen into a decrepit state, in a believable manner. It all makes logical sense, too. In Anima you’ll run through each environment, following linear points of interest, jumping across arbitrary platforming sections, and never once feel like these environments have any thought that has gone into them. 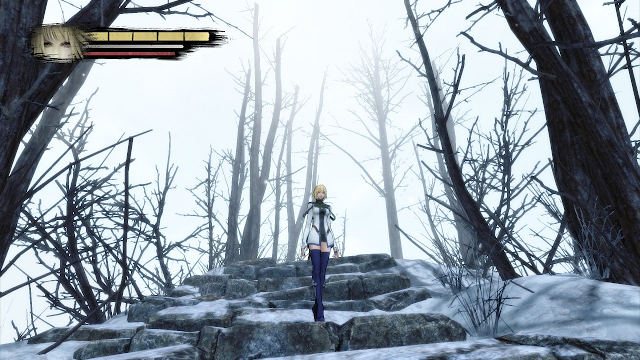 The Dark Souls reference is apt, because this game shares an interest in boss battles with that one. Bosses in Anima tend to be extended, mutli-stage affairs, and they tend to be fairly unforgiving, with the boss becoming more difficult in its routines and abilities the closer it comes to death.

Unfortunately these battles also have none of the nuance or complexity of Dark Souls, and instead typically involve ducking around to avoid attacks, waiting for a pause in the pattern, before getting a couple of attacks of your own back in. These attack patterns are arbitrary and there’s no real differentiation in the personality in which bosses fight. The Dark Souls bosses each had behaviours that were so different that they developed distinct personalities through battling them alone. Anima’s bosses are, generally, uninteresting roadblocks that stand between you and the next level.

The combat system itself has potential. Our girl is a nimble sort, and has access to attacks that allow her to juggle enemies in the air, as well as a powerful attack that helps her close distance with any enemy on the field. She also has magical ranged attacks. Combat with the regular enemies that she’ll encounter in the levels is actually more fun than the bosses, because there’s room to experiment and come up with a personal style to combating enemies. Boss battles typically have a specific set of weaknesses that mean they need to be tackled in a specific manner, however, and that stifles the closest Anima ever comes to enabling creativity. 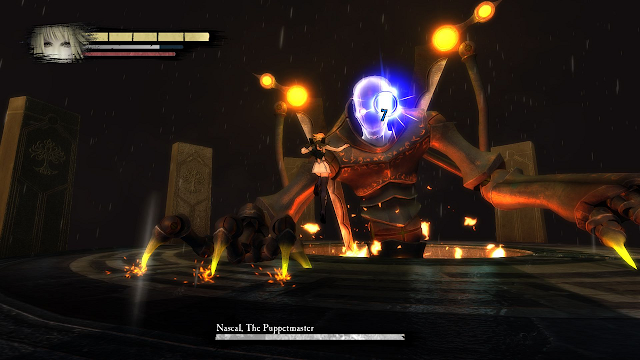 Mechanically, Anima is well made. It’s an attractive game that makes good use of art design to conceal the relatively simple construction of the enemies – certainly not something I begrudge the game, given that Nier did a very similar thing so effectively in the past. Environments are also attractive, and the soundtrack works to suit the action as you would expect. The only objective criticism that can be levelled at the game, really, is the voice work, which is beyond amateur and a real detriment to any connection that we might have otherwise had with the characters.

So, again, there’s nothing overtly wrong with Anima. It works, and it is, mechanically, a competent action RPG. What lets it down is that it is so painfully artificial. I tend to think it’s a consequence of relatively inexperienced developers having major ambition, and I don’t begrudge them for that, but at every turn Anima really does try to force itself into an experience well beyond what the team was capable of pulling off.

Anima is not that engaging at all because of that overreach, and it’s stressful because I really did want to enjoy this. But the games it tries to be like; titles like Nier and Dark Souls, are unforgettable, potent, important titles. I should not be forgetting almost everything about a game that aspires to that level of greatness. but in this case I did just that.