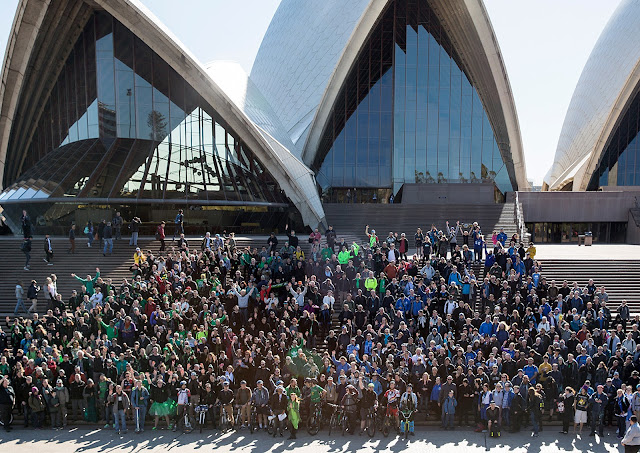 When Ingress was announced back in 2012, I am certain that a lot of people dismissed it a gimmick or fad. As much fun as it might sound to have a game that tasks you with wandering over the real world to specific locations to achieve goals, the reality is that it is difficult to motivate people to, over prolonged periods of time, travel around for the sake of a game.

And yet that is exactly what Ingress achieved. The game has a global following, is available in 200 nations around the world, has been downloaded 15 million times to date, and is still going strong today. Over the past weekend, the developed held an event in Sydney, and was able to attract some 1000 people to walk around various target locations through the CBD, before meeting up at the iconic Opera House for the after party.

Most impressively, though, is that the players were not only from Sydney. Players from across the Asia Pacific region, New Zealand, China and as far away as Germany, all congregated together for this event, demonstrating just how engaging – and meaningful – Ingress has been to a lot of people.

“I talk to a lot of our players at these events, which we organise around the world, and the number one reason that people play is for the social side,” Ingress product marketing lead, Archit Bhargava, said.

“On Saturdays, groups get together and grab a coffee before settling down to play at the park. For others, such as parents and children, it’s a way to bond together.”

For others, Bhargava said, there’s a powerful notion of escapism that is driving people to continue playing. The game has a James Bond or Jason Bourne vibe, and for some of the community, the ability to earn rewards for the team by going to the most remote locations helps to give people the feeling that they’re jet setting around.

“One gentlemen from Western Australia was telling me that one of his friends is an airplane pilot, who needed to fly a number of miles in order to keep his license. To help his friend keep the miles up, he organises to fly to remote islands so he access rare portals and keys, and because people can see that he’s got these links across the country, he in turn feels like a hero,” Bhargava said.

“Another good example is when a group crowdfunded a bush plane to fly to Alaska, where there was a particularly iconic portal, and they sent a woman up there to complete a bunch of actions and link back to San Francisco where we were running an event so her team could win.”

Every bit as important to the notion of constructed reality as VR and AR, location-based applications such as Ingress are really contesting the boundaries between the ‘real’ world and the virtual spaces that so many of us inhabit now. Where AR and VR allow you to construct a new reality around you, though, games like Ingress allow you to interact with digital artefacts that exist in the same space as you, but not in a physical sense. Nonetheless, they blur that line between the real and the virtual because, regardless of where you are, the content of the game world won’t physically move.

Bhargava sees a point in time where location based games and applications such as Ingress will join with other applications of augmented reality in order to offer an even more complex experience, with even more interactions that seamlessly integrate with the physical world.

Ingress’ developer, Niantic, is working on Pokemon Go for Game Freak, for example. The game will require players to travel around in order to capture various monsters, and AR would be a natural enhancement to that experience.

“AR would being our games to the next level,” he said. “Imagine seeing Pokemon in the real world, and having an environment where you can chase them and catch them; that would be really fun.

“John Hanke, our founder, is really keen on what AR technology will offer, and is a big fan of Magic Leap in the US and Microsoft’s HoloLens, and the experiences they’re providing. The appeal is simple enough; you won’t be bounded by a screen or a physical device.”

The future of geolocation games is in more than entertainment

This technology is some ways away yet – and Niantic is firmly focused on experiences that have the maximum possible reach, which means smart phones and other mobile devices, but it is inevitable that as AR technology improves, we will see people start to experiment with the technology, and coupling it with location-based data.

These technology paths also have potential well beyond gaming. The idea that people are more likely to learn if they are highly engaged in the topic means that games like Ingress have potential educational value; kids could visit a specific area and, while playing the game, also be fed information that they are far more likely to pay attention to than reading through an torn textbook.

“Education is certainly something we’ve thought about,” Bharava said. “For example, there was a high school in Victoria where students used these geo-location features to explore a historic settlement and learn a bit about the gold rush.

“They were told a little of the back story of the game, and that intrigued them, and got them excited about what they were learning. We do feel that teachers would appreciate this technology in the tool set,” he added.

However, in the shorter term, the real potential for Ingress seems to be in tourism, where Niantic has been actively – and successfully – having discussions with tourism boards around the world.

With tourism, the concept is simple; players are encouraged, via in-game awards, to visit various points of interest through a city, at which point they’ll be encouraged to participate in those points of interest as normal tourist activities. In doing this, the game effectively replaces both guide book and map, and gives tourism boards the opportunity to direct people to key points within the city.

“We’re still taking baby steps to see what we can do with the tourism industry, but so far we’ve been getting a lot of support from the boards,” Bhargava said.

“For example, you could go to landmarks in a city and have to do actions at that portal to finish an in-game mission. Sometimes you have to answer questions such as ‘who is the architect of the Sydney Opera House’, and that really encourages players to then explore the landmark and learn about it before they move to the next one.”

As Niantic has seen with its events around the world, people are willing to make Ingress – and, one assumes, Pokemon Go – a significant part of a trip. With the social element, there’s the potential to even set up tour groups, and help introduce people, via in-game events, to countries that they may well have never considered visiting otherwise.

Surely if Niantic, and other developers, are able to continue developing geo-location games along those lines, then we’ll have a new weapons in our collective arsenal to encourage people to learn about new things, combat ignorance, and foster a global sense of community. Long term, this can only be a force for good in the world.