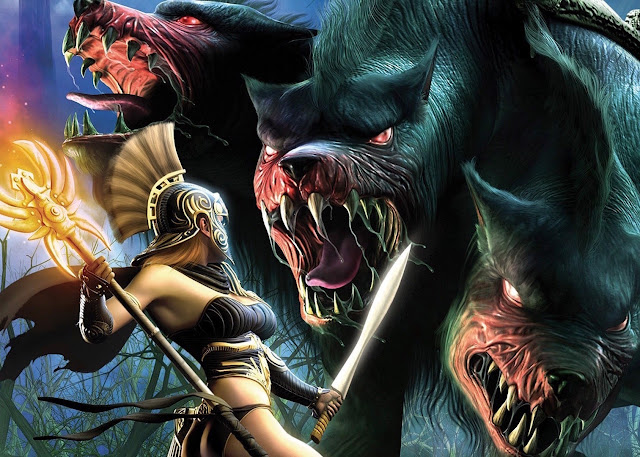 Diablo has certainly been one of the most influential franchises in gaming. That’s why we tend to call other top-down, RSI-inducing action RPGs “Diablo clones.” It has certainly become a favourite genre with Dungeons & Dragons (Baldur’s Gate: Dark Alliance) and the Sacred series both being notable attempts among a mass of lesser attempts to outdo Diablo at its own game, but it has been a difficult slog, as Blizzard has shown a mastery that has always been one or two steps ahead of its rivals.

Related reading: Diablo III is sadly not on iPad, but it’s a remarkable game that’s worth playing. Matt’s full review.

There is one game that is a genuine argument to be a “Diablo beater,” however; Titan Quest. And now, courtesy of mobile port specialists, DotEmu, that game is on my iPad.

Titan Quest was originally released on PC in 2006, and really made waves for simply being really, really good at being a click-em-up. You take control of a warrior from Greek mythology, setting out on an epic quest to restore balance to the world, after the communication link between humans and the Gods has been severed. 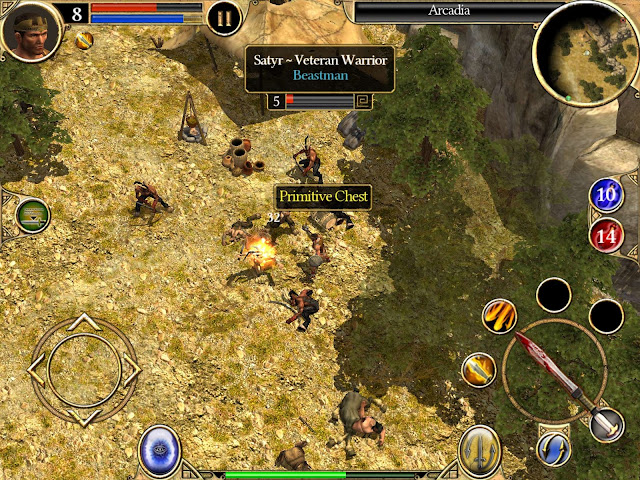 Now this is real swords-and-sandles stuff. Men in togas plea for your help, and creatures pulled straight from the mythology books you read as a kid make up most of the enemies that you’ll fight. Often in modern video games the authenticity of real-world mythology is sacrificed in order to make for a more believable game. The Witcher 3, for example, pulls its world from multiple different mythologies in order to create its own experience. Even the God of War games, though heavily inspired by Greek myth, feature artistic license in order to achieve the exciting setting that it was aiming for. There’s nothing wrong with doing that, but what makes Titan Quest so distinctive is that it does stick to its proverbial guns, and does paint a very traditional, very authentic, portrait of mythological Greece, followed by Egypt and then Asia.

What I really liked about this game is the way that it contextualises your own actions within the myths that are so familiar with us. For example, in the first village you come across, you’ll bump into a person reciting the glories of Herakles, and wishing for his return to put an end to his people’s woes. You’re then dispatched to try and track down Sparta’s king, Leonidis (yes, that Leonidis) to beg for him to send soldiers to protect the village against attack. As your own quest develops and you start achieving feats of an equivalence to what the Greek heroes of old did, you start to feel like your own hero is taking his/her place among that pantheon of greats. This is a powerful world building exercise for anyone with familiarity with Greek mythology, and helps to create real investment in the action and the development of your character.

Thematically it’s an all-action Diablo clone, so we’re not talking about a deep dive into complex philosophy here, but there is a nice theme running through there about humanity breaking free of the reliance on faith in order to stand on its own two legs. Yes, your role within the game is to restore that connection between humans and their Gods, but I nonetheless liked the narrative that was going on in there to suggest that humanity is capable of operating independent of its religion. 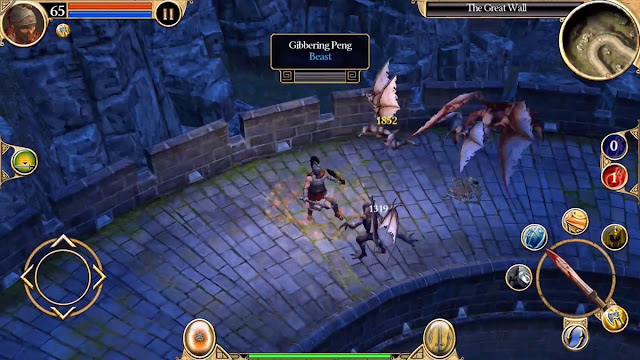 Titan Quest has aged well over the years. I’m not just talking about the visual style of the game (though it is an attractive game, to be sure), but the overall flow of the game has remained as addictive now as it was then. Titan Quest offers fairly linear progression, with a minimum of side quests to take on along the way – and usually those sidequests can be completed on the way to the next major quest point, rather than requiring backtracking.

This is an pleasant antidote to the addiction that so many modern games have with sending players wandering around open maps trying to resolve a thousand different side quests at a time. The focused, driven experience of Titan Quest allows for smooth transitions between environments, and when the environments themselves are also pulled directly from mythology, the sense of world building that you get from the game is a real tour de force.

It’s also worth noting that while you’ll be spending a lot of time on a fairly straight and narrow path in Titan Quest, there are some hidden bonus areas to discover, and even though the number of side quests are kept at a relative minimum, the main plot of the game is still mammoth – you’d be looking at, at a minimum, 50 solid hours of play to work through the game the first time, and then you’ve got additional difficulty levels to challenge yourself with. As simple as the plot is, I do prefer spending 50 hours moving from one new plot point to the next, rather than wandering across ground I’ve already covered because there’s a new side-quest to deal with. 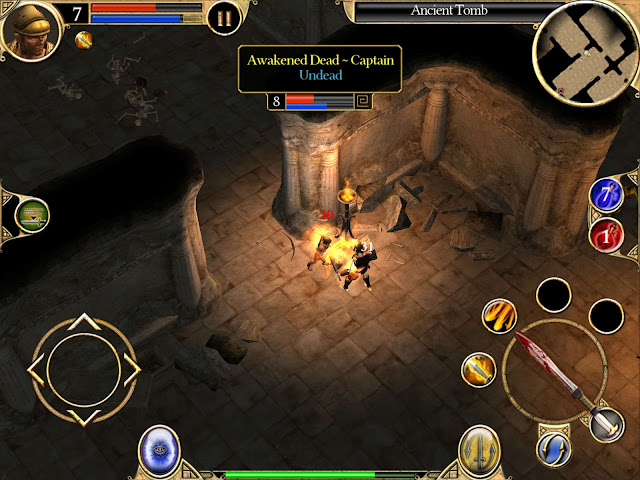 DotEmu is one of the best iOS porting specialists out there, and it has outdone itself with Titan Quest. Virtual controls are always a concern in action-based games on iOS, but here the big buttons on either side of the screen allow for very smooth control of your hero. Hotbars are also easily placed around so skills can be activated in the heat of the moment, and it’s possible to set a favourite skill to auto-cast as frequently as it resets as long as the attack button is pressed down. Due to the complexity of the game I don’t recommend playing it on an iPhone, though you can certainly try.

What is disappointing is that the game doesn’t support MFi controllers at this stage, and is also not available through the Apple TV. I would like for both to happen, as I’d love to be able to play for a little on my train trip to work, and then pick back up where I left off when I got home in front of the TV. Hopefully this is patched in later on.

Titan Quest was notorious for its sluggish performance back when it was a new game. On my iPad (Air 2 model) there were occasional moments of stuttering frame rates, but these were minor, and the world itself was big and beautiful enough that I felt this was a reasonable tradeoff. Indeed, this is one of the better looking games currently available on the platform. 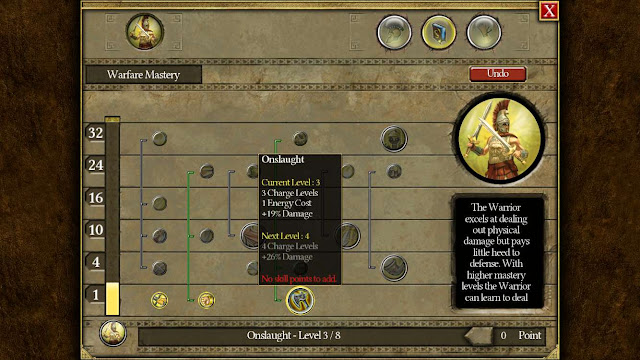 Related reading: Dungeon Hunter 5 is on iOS devices as well. It’s not worth playing. Don’t touch this one. Matt’s full review.

Nordic Games recently acquired the rights to Titan Quest, and if this port is the publisher’s way of putting the feelers out to see if there’s commercial potential in the franchise, I hope it’s a success, because a return of Titan Quest would be welcome stuff indeed. Sitting alongside classics such as Baldur’s Gate, Icewind Dale and Star Wars: Knights of the Old Republic, the iPad really has become a home for fans of classic, meaty, RPGs while on the go. And the best bit is that iPads are legitimate tools for meetings… so you know what to do if you ever get stuck in a particularly boring one.