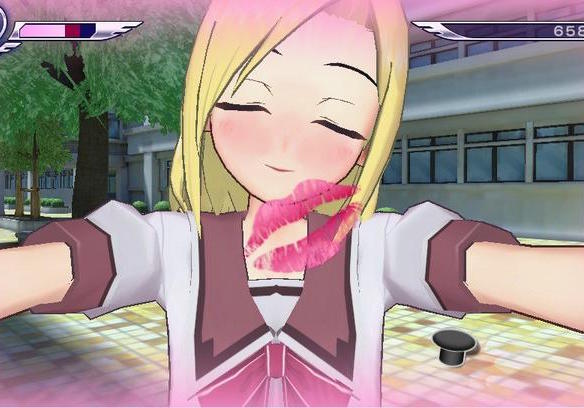 Gal*Gun: Double Peace is being localised into English, and it is going to be utterly slaughtered by the media. And that’s going to be completely unfair, because Gal*Gun is great.

This game was provided to us by Play-Asia for review. If it looks good to you, then please consider grabbing it from Play-Asia, and helping DDNet produce many more of these reviews!

It’s going to be targeted by robust criticism because it’s a game that gives you – a faceless, formless male – the job of shooting pheromones at swarms of school girls that are trying to molest you. This makes them climax and takes them out of commission and then they leave you alone.

But it doesn’t stop there. Your hero has the ability to X-ray zoom. Yes, this gives you a look at each girl’s underwear. Some of them wear very cute panties indeed. And then you have a special attack which cuts to a minigame where your job is to touch a couple of girls all over as they lie prone in a bid to build a pleasure meter for each of them. And I do mean you can (and should, according to the game’s mechanics) touch them everywhere. Doing well at this minigame builds up your character’s statistics, dating simulator-style, so it’s something you’ll want to do frequently.


That all these systems come together to form one of the most unique and mechanically interesting rails shooter games that you’ll ever experience is going to be quite irrelevant to the games reviewers out there. The media are going to slaughter this game because it is heavily, unapologetically, sexualised. That the sexualisation happens to school girls will be the icing on the cake.

Sadly, in doing so the game reviewers and odd critic will miss the point of this game entirely.

Gal*Gun: Double Piece is not developed by a purveyor of trash B-exploitation games. It’s the developer of Inti Creates – a hugely prolific studio that is characterised by the creativity and intelligence sitting behind its game designs. Experience Inc. is also listed on the box, indicating that it had a play in the development of the game too, and Experience Inc. is the team behind some of the most remarkable and interesting dungeon crawlers we’ve see in recent years. 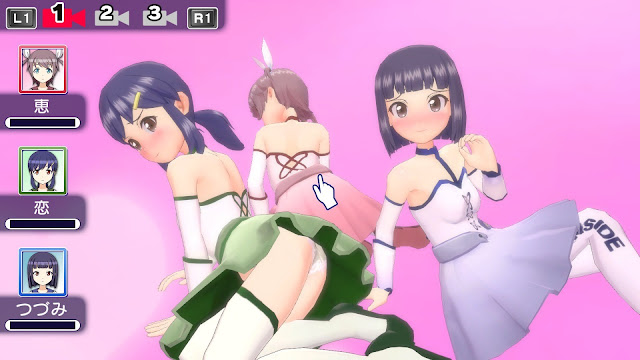 That pedigree should be the first clue that there’s more to Gal*Gun than the initial impressions would indicate, and indeed that’s the case. There’s a surprisingly meaty narrative backing the game, and it addresses some pretty worthy themes over its course. Most significant of these is the way it flips the way that street harassment typically plays out. Here’s a game where you play as a male character, who has been denied any personality, including an image; you can pick between a couple of different male characters at the start of the game, but they’re all silhouetted out.

That male then needs to fend of waves of sexually-aggressive women who are trying to molest him. And, note, it’s explicitly clear that he doesn’t want their attention. Your goal is to survive the molestation to the end of the day, and to figure out who is the one ideal partner for you by the end of the day, or be forever denied love. Of course, figuring out who the right person is for you when all the girls are trying to jump you is something of a challenge.

It’s ludicrous, of course… right until you realise that that experience isn’t actually so different to what women actually go through in the real world. Men feel entitled to make advances on any woman that catches his fancy, and often are quite aggressive about it. As you play there will be girls cat calling you as you’re walking around the school or environments. That is also not so different to what women experience every time they have the misfortune of catching the eye of some random guy on the street. 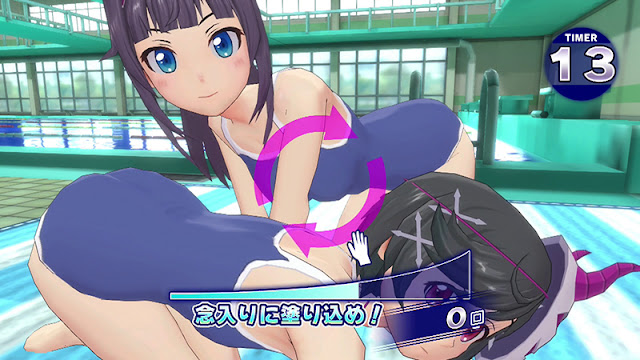 In being so ludicrous the game is drawing sharp attention to the dehumanising effect that street harassment has on people. There’s no interest in the personality of the hero that you’re playing; you’ve been reduced to a series of arbitrary attributes, and your performance in the game is judged based on that. Given that just a couple of weeks ago there was a story about street harassment in Australia that went viral after a guy took slalker pictures of a girl in a supermarket and decided he was in love with her based on nothing but her physical appearance, only for the supermarket in question to actually encourage his behaviour in “finding” her, I found Gal*Gun to be surprisingly poignant, and, again, based on the pedigree of the developers, I do in fact believe it to be deliberate.

So perhaps it’s even a good thing if this game ends up being controversial when it lands in the west. If, through the controversy, people start having conversations about harassment, then the game has accomplished something important. I realise that this being the games industry the actual conversations will probably start and stop at “you’re a pervert if you play this game”, but I remain in eternal hope that at some point the industry will grow up and develop a more inquisitive spirit in the way it analyses itself.

As a game I’d much rather play Gal*Gun than anything like Call of Duty. On the most basic of levels the idea of a bloodless shooter appeals to me. A shooter that replaces the blood and violence with sex is something that I’ve been advocating for for years now. And it does play really well. Though it would have been better suited to a motion pointer controller (the PlayStation 3 original actually did come with PlayStation Move support, which this one lacks), aiming and firing is still a snap with the conventional controller. And when enemies start coming in from multiple directions, quickly jumping around to figure out, and then remove, the most immediate threats, becomes really quite challenging. 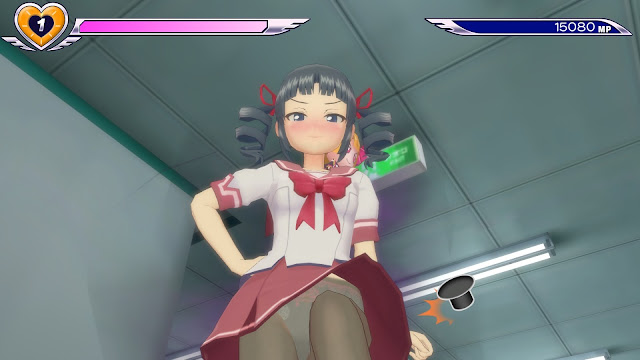 As mentioned above there is some character development to play around with (though it mostly comes as a consequence of playing well), and at various points you’ll have a choice of which path to take, so there’s replay value in trying out the various different routes, and that’s a good thing because each run through the game is relatively short.

Unfortunately it’s not the most import-friendly game. There’s a Twitter-like messaging system built into the game and there’s a lot of important information that is shared through that. As I’ve highlighted above, too, the story itself is surprisingly important in contextualising that you’re taking X-ray photos of girls and poking them in their nether regions, so those without a working understanding of Japanese will miss a fairly important chunk of the experience.

That being said, Gal*Gun is still a lot of fun, and many of the core themes are self evident without having them explained to you. If you do want to import it you’re still going to have a heck of a time, and it might be worth grabbing both versions, just in case the localisation team decide to remove or edit some of the content. I know how important that is to some people. 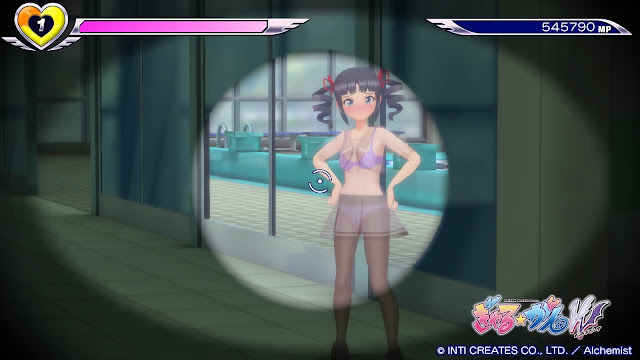 Related reading: Ten other sexy fanservice games to grab for your PlayStation 4.

I am genuinely surprised by Gal*Gun: Double Peace. I went into it with limited expectations; I genuinely expected a poorly executed arcade game that was using extreme fanservice to shift copies. The fanservice is there, for sure, but what I ended up getting was one of the strongest examples of a game using fanservice themes to make a point. This is one of the real surprises of 2016 to date.

(And, if you do want to grab the English release, Play-Asia has that up for pre-order now).

On NORTH: A game everyone should play to learn some sympathy for refugees