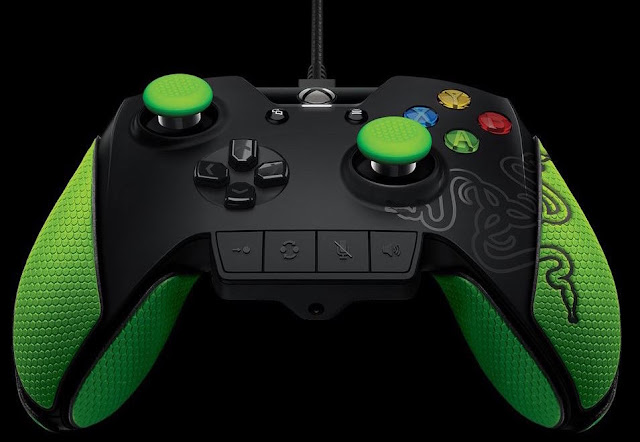 The Razer Wildcat with set you back about half the cost of the Xbox One itself. That price alone means that this is a device that most people will look at briefly and the pass on over for the many far less expensive options out there.

Related reading: All of our Razer hardware reviews.

The Wildcat isn’t for everyone, though. This is a controller that has been designed specifically for the hardcore competitive type, and just like a professional tennis player uses a racquet that is built of precision materials in order to be competitive at that higher tier, so too will serious gamers probably want to consider what Razer has on offer here.

The most immediately obvious thing about this controller is that it needs skill to use well. I know that might sound faintly ridiculous, but if you don’t play a lot of games, the ultra sensitive control sticks will make navigating through games that much more difficult, and the face buttons click at the slightest bit of pressure. For competitive players this instant feedback becomes an extension of the player’s will, with absolutely no lag between the intention to press the button, and the button being pressed. But for less experienced players there are going to be so many accidental presses that all games will become exercises in frustration.

Experienced players will also appreciate how customisable this controller is. There are four buttons beyond what the standard Xbox One offers; two additional buttons on the shoulders of the device, and two detachable ones. These are all completely customisable, so it’s possible to remap actions to these buttons if they are more comfortable or quicker to reach than the face buttons. Reloading a gun in a FPS with a quick tap of the back button allows for far faster actions than taking the thump off one of the face sticks to do it, for example.

All of this is housed within a unit that has an exceptional, weighty, build quality. It’s actually lighter than most of the other Xbox controllers out there, but the balance is better, meaning it feels heavy in the right places. The weight helps load the controller into the hand, providing assurance of where it is sitting at all times, and preventing wayward button presses. The triggers on the shoulder, so utterly critical for most competitive games, are inflected upwards, meaning the fingers rest against them comfortably and the most subtle of movement can push them down. For even greater ergonomics, there are grips that can be applied to both the control sticks and palm rests of the controller. These help wayward slippage, which is especially important when sweat starts to build up after prolonged play sessions.

If the controller has an Achilles heel, it’s unfortunate that it’s just a significant one; the D-pad is placed poorly, uncomfortable to press, and almost impossible to “roll” the thumb across the buttons as you would need to in a standard fighting game. I actually can’t see anyone remotely serious about fighting games using this pad for that reason. And perhaps Razor realised that fighting game genre was out of its reach and fighting game fans are going to have arcade sticks instead. The D-pad on the Wildcat works for the kinds of functions that are generally prescribed to the D-pad in shooters, and that’s about all it’s good for. It’s fine that the device wants to be so focused, but I think people looking for a pad they can use for their general gaming when not playing shooters will be a bit disappointed by this. 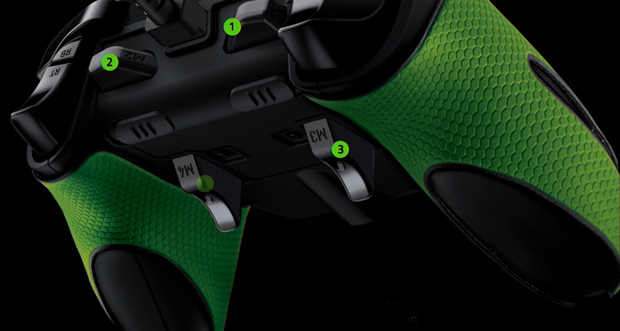 People who are concerned by aesthetics will also need to content with the ugly green colour on the grips that Razer has all-but trademarked. I know it’s meant to emulate a neon glow, and features in Razer’s logo, but cool like Ferrari red this is not. It’s bright, sickly, and just doesn’t go with anything. It would have been nice if Razer at least provided alternative colours that would suit a wider range of living rooms and personal tastes, it would have been appreciated. The base model of the controller, without the grips, is a slick black that suits the Xbox One console well.

One final feature on the controller beyond the Xbox One’s standard one is a quick control panel that you can use to mute your microphone, adjust audio on the fly, or quickly remap the controller’s four additional buttons. None of these features will mean anything to anyone who isn’t involved in the competitive gaming scene, but they’re a nice touch for those who are.

In addition to the Xbox One, the Wildcat works with all PC Windows operating systems from 7 onwards. It would be nice if there was a PlayStation 4 version, but alas, that is not to be yet. That said, for people with Xbox Ones or regularly play games on PC, there aren’t too many controllers that are comparable to the standards of the Razer Wildcat. You’ll pay for it, but it’ll also get your money’s worth from it.

On Hitman – Episode 2: Sapienza: take a trip to an idyllic little village