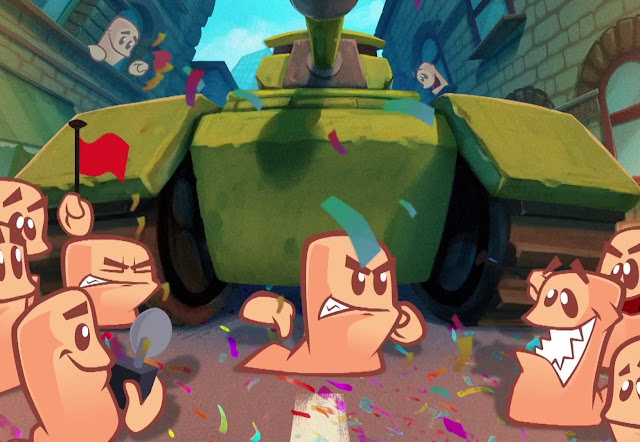 It’s incredible to think that the Worms franchise is 21 now. I distinctly remember playing the original game at a mate’s house on his original model PlayStation, and having a hell of a time with it.

In fact, I’ve stuck with Worms over the years. I’ve owned various handheld versions on my Game Boy devices – not because they’ve been good games, but simply because I wanted Worms on the go. Worms Armageddon on the Nintendo 64 was a game that was on high rotation for local multiplayer for years. I even got along with the 3D Worms games. Hell, I might just be the only person on this planet that enjoyed Worms Forts: Under Siege.

So I’m always up for a new Worms game, and this year brings Worms W.M.D. This particular title ups the chaos by allowing many more players (up to six) to have many more worms (up to eight each) on the battlefield (thus also cutting their life expectancy drastically). More importantly, though, it includes vehicles! The trailer shows the brutal effectiveness of both the helicopter and tank, and boy can I not wait to get my hands on those.

Underneath the wacky weapons and silly art style, Worms has always been worthwhile because the core turn-based tactical action has actually been quality stuff. There’s a lot of skill involved in getting good at Worms, and it will be interesting to see how people get along with those new vehicles.

The new trailer below: