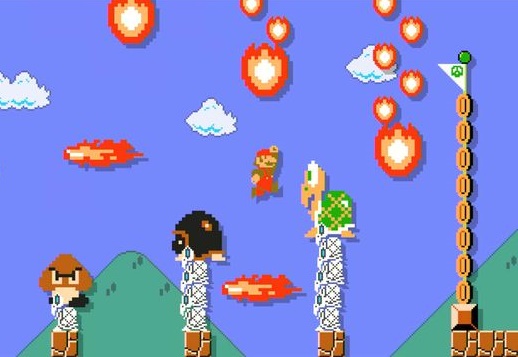 The idea of making my own Super Mario levels has been a dream of mine for literally decades. Sure there have been shady means to do it through emulation, but I just did not have the time nor the patience for that. But fast forward to 2015 and my dream has come true. I suspect many people feel the same way, and it’s just as well that Super Mario Maker does it so very, very well.

Related Reading: And for a “real” 2D Mario platformer on the Wii U, you should really consider New Super Mario Bros. U (if you haven’t already).

You see, Super Mario Maker is a straight up in your face explosion of random Mario levels, created by people from all around the globe. Think LittleBigPlanet with no story and almost completely user-generated content. This is all Super Mario Maker is, and it is possibly the most refreshing 2D Mario game since Super Mario World.

This is not to discount the normally top-notch level design by the folks at Nintendo, of which is almost near perfect every time. It’s just that up until now, 2D Mario games have followed a very similar formula. But now Nintendo has unburdened itself with the creative side of things, and allowed its biggest fans to do what they like with the basic engine that drives Mario games. The result is, over the longer term, going to be an absolute mass of creativity and innovation in the 2D platforming genre. 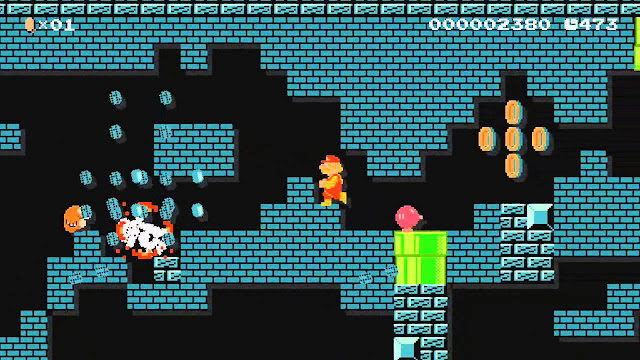 Super Mario Maker gives players the ultimate challenge: to create that perfect course that everyone will love, one that is challenging, yet rewarding for the person playing it. Super Mario Maker is a showcase of the creativity of the world wide community, those that are popular and get high ratings from the user base are rewarded by being featured in the best creators list. Super Mario Maker also appeals to those who just want good, raw, platforming fun. There is no inherent need to create your own courses, as my mere review code held hundreds of courses readily available prior to release. I can only imagine how many courses will be available for play once the public have had their hands on this thing for a month or two.

Related reading: RPG Maker VX is a very useful tool for people who are more serious about learning how to make games for themselves.

Of course, even for those that are coming to this mainly to play other people’s levels, one would be mad to completely ignore the creation tools available to them. Super Mario Maker was also designed as a love letter for fans to celebrate the 30th anniversary of Mario, and it does a brilliant job of that in giving players the ability to make levels in the worlds of all 2D canonical Mario titles (sorry, Doki Doki Panic and Yoshi’s Island, you’re not Mario enough!). Most of these styles blend seamlessly together at the touch of an icon, so, if you want to see if the level plays better as a New Super Mario Bros. level instead of a Super Mario Bros. 3 level you can simply tap over to enjoy that way.

The sound is fully intact as well, with 8-bit sounds matching that art style, right through to the beautiful sound quality of modern Mario games. At this time of writing, there was no way to choose the music for your level, which is a shame, as I quite like the castle music from Super Mario World, and using it in, say, an underwater level would have been a lot of fun. There are also some limitations to level creation. You can work with four different visual styles, though in each of these styles are various tile sets that you’ll not be able to use. So for example you won’t get to stick grass in an underwater level. It might sound like a minor gripe, but for a game designed around unleashing creativity it would have been good to leave the creative decisions up to the player. 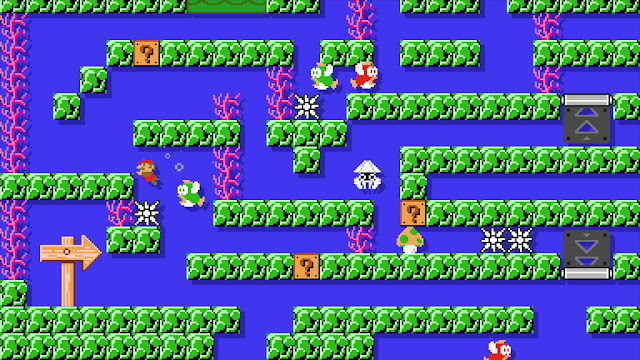 There are also some limitations that will prevent you from creating “pure” levels in the vein of later Mario Bros. games. For example, with boss battles you can have Bowser and the draw bridge, a feature all fans will recognised from the first Super Mario Bros. and that’s it. There is no Lemmy, Morton Jr. or any of the other Koopalings ready to do battle in the boss room of an SMB3 airship, and this is actually quite disappointing. Many of the iconic enemies are completely missing as well. You unfortunately will not find any Chargin’ Chucks, the Sun from SMB3, and some others that just feel like they should have been included. This goes for power ups as well.

But in other areas it’s possible to do some crazy, surprising things within the Mario formula. Want Lakitu to throw Piranha Plants everywhere instead of Spinys? Go for it. Want the Bullet Bill cannon to shoot Starmans? That’s doable too. Of course, this is all very easy to do thanks to a simple drag and drop interface. This is also a game that is absolutely loaded with little Easter eggs and surprises for people who experiment with the interface, so Nintendo has done everything possible to encourage people to be playful and creative, just to see what they can achieve in their levels.

Of course there’s also a great sense of reward in creating a level that other people like to play. Nintendo has made it easy to share levels online (all you really need to do is prove that the level can be beaten), and, equally, it’s easy to find new levels to play for yourself. Once online, courses are easy enough to search and find. There is the option to filter by the most popular course designers, the most popular levels, as well as playing eight randomly downloaded courses in a row with 100 lives. There is also the choice to focus on ‘Easy’ and ‘Hard’ levels, which is great for accessibility. Again, it’s simple but it works so well. You do not necessarily need to be online, as there are courses on the disc already, and you’re obviously be creating your own to extend on that, but this game really does lose something if you’re not actively participating in its community. 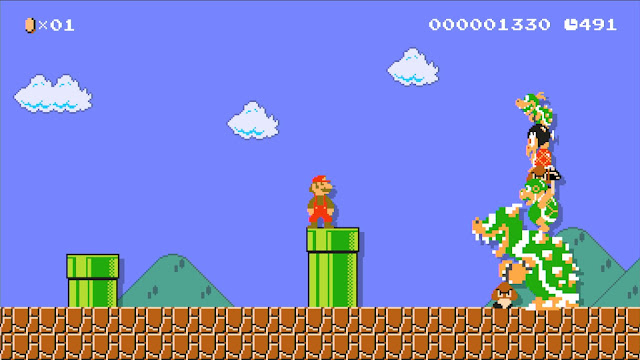 Related reading: And for people that like to make their own levels on PlayStation 4, consider LittleBigPlanet 3.

Super Mario Maker is a remarkable game that only just falls short of what many have been dreaming of for 30-odd years. Anyone, regardless of skill and creative talent, can play and enjoy Super Mario Maker, and that is a rarity for creation tools. All I ever wanted to do back in the day was recreate Super Mario levels with interesting twists. Super Mario Maker encourages me to do so much more and try and be a game designer all by myself. And for that I love it.