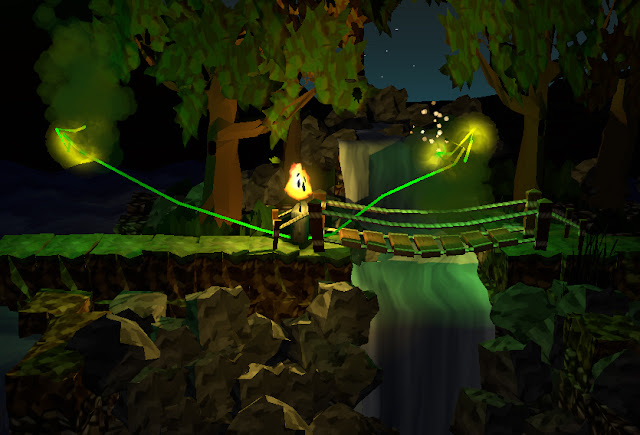 Candlelight feels like a marriage between the modern platformer and a walking simulator. Its production values are wonderful and there is a sheer joy in every aspect of the game’s design which is infectious. This is backed by simple yet solid platformer mechanics which do a good job of drawing the player through the lavish environments, making the player forget that they’re even bound to a 2D plane. Developed as a passion project by one man studio, Pixel Maverick Games, Candlelight is vibrant, contemplative and a great game for all ages.

The premise is that a dark cloud is stealing all the light away from the world. As a lone candle resistant to the cloud, you must go forth and light all the candles you see in order to fight this oncoming darkness. It’s a simple story which is told without text or language, and it seems to be a stylistic choice to really push Pixel Maverick to tell its story through image and gameplay. The game’s first level is aptly titled “The Loneliest Journey” – the little candle has no one to rely on except the player to get through the levels and succeed on this epic quest. The non-verbal focus is the thing I love the most about Candlelight’s design. Pixel Maverick has managed to tap into that magical zone where revered studios like Nintendo and Sonic have managed to do with their own  platformers – without ever saying a single word, the player is able to relate to the candle and share the common goal of wanting to get through the level. Pixel Maverick uses disempowerment to its advantage in Candlelight, with a protagonist that’s perhaps 2 per cent of the total screen size that bears perpetual worried eyes in its adorable flaming wick head. The audience thus immediately identifies the candle as a very cute underdog, and because the character is so small, you feel that the world is enormous.

World design is also Pixel Maverick’s forte – environments are lovingly modelled in 3D and avoid the use of repeated assets whenever possible. Each pathway looks distinct and is peppered with little details to create the sense of a living, breathing world. The closest comparison I can think of is Retro Studios’ work on the Donkey Kong Country Returns series – every little background detail is there for a reason and contributes positively to the emotion the developers want you to feel as you walk through their environments. 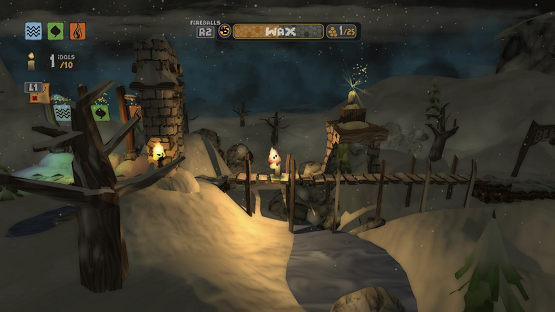 Candlelight also implements an interesting mechanic using light – since you’re restoring light to the world, the player controlled candle is often the only source of light in a level. This means that you see things closer to you and things further away from you are in shadow, and you also get to see your environment casting dynamic shadows as you interact with it. It’s a simple design choice which quickly sucks you into the game’s world, and stands as an example of how effective visuals can influence the way we feel while playing. Pair it with a beautiful, earthy soundtrack featuring pan flutes and muted drums and you have an absolute treat for the senses.

The game itself is quite simple – it’s an adventure platformer where you aim to unlock doors in the way to your goal, a candle to be lit which ends the level. There are no gimmicky mechanics and I wouldn’t exactly classify Candlelight as a puzzle platformer – it’s rare that you’re solving puzzles in this game. Instead, you’re just walking and jumping easy gaps most of the time, while taking in the scenery around you. Each level has a temple you must conquer – themed around water, wind and fire respectively. Besting all three elements (each of which on their own is deadly to our little candle) opens up the door to the exit. The game is divided into 10 levels, each requiring around 15-20 minutes to complete. Scattered across each level is wax which elongates your life’s length, as well as idols which can be lit to unlock a secret challenge area.

Candlelight is quite clever with its approach to game difficulty – finishing levels is easy enough, but the idol challenge areas can be incredibly hard, requiring strict timing and precision in your jumps. At the end of a level you are graded based on your time, your death count (which will rarely exceed single digits) and how many objects you collected. Pixel Maverick gives a little nod to those who like a challenge, but I actually find Candlelight much more engaging when you ignore the extra tasks. It’s rare when you play a game that doesn’t push you to your cognitive limits, but Candlelight is just that. Casual playthroughs are relaxing and serene, and can even be therapeutic after a long day – this is a forgiving game, and it’s all the better for it. 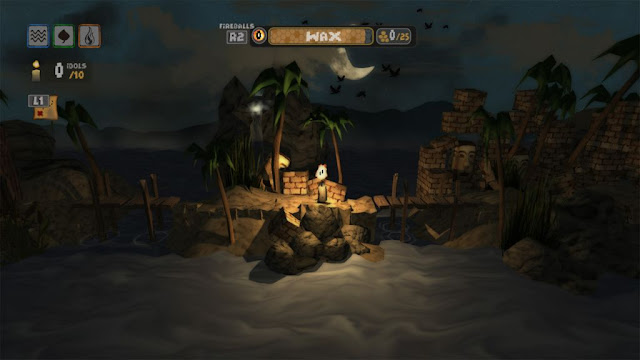 Candlelight isn’t a long game but it kept me entranced throughout the entire playthrough. It’s a fantastic example of a simple idea executed very well, with extra effort spent in ensuring the player will have a good time. This isn’t a game which you will get excited about – but in some ways it’s even better than that. This is a game that you can get comfortable with, that will help you relax, and will make you look at platformers in a new way.