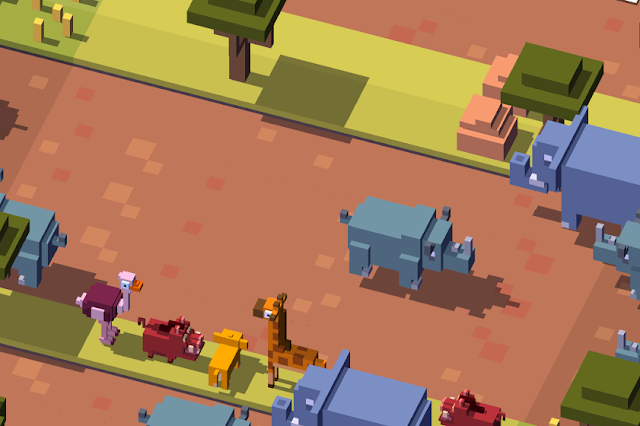 We love Crossy Road at DigitallyDownloaded.net. It’s fun, it’s light hearted, it’s challenging, and it’s adorable. It became our Apple TV game of the year last year when we discovered that it is also a lot of fun in multiplayer.

Related reading: The Aussies behind this game also produced the excellent Pac-Man 256. Matt’s full review of that here.

So we were justifiably excited when the team announced that it was producing a Disney version of Crossy Road. Today, that game landed on our iPhones, and instantly we were in love all over again.

On a basic level it’s a simple reskin of the Crossy Road aesthetic. Now, instead of blocky chickens, rabbits and zombies, we have a huge number of beloved Disney characters in blocky form. There’s the classics (Mickey, Donald), there’s the modern (Zootopia’s characters), and then there’s the modern classics too (Lion King, Toy Story). With each character, the environment changes to suit. So, where Mickey and Donald bounce around a colourful but classical Crossy Road experience, accompanied by some very traditional Disney tunes, change your character over to Simba and you’ll be taken to Africa, and the cars are replaced by elephants and giraffes. 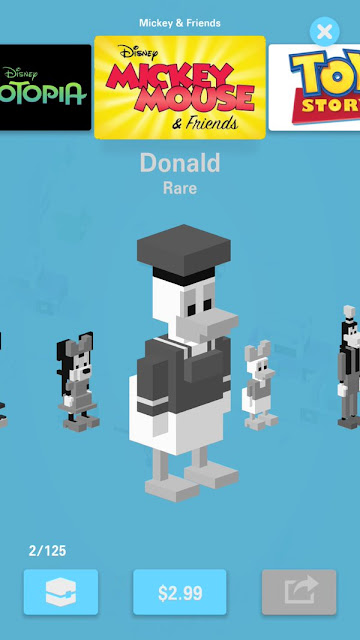 Otherwise, the game plays in exactly the same way as classical Crossy Road. It’s an endless Frogger clone, where you’ll swipe on the screen to send your little character bouncing over logs in the water, and past cars and trains on the roads. The beauty of the game is in its simplicity; eventually you’ll make a mistake and then it’s game over. Your goal is to try and get further in your current run than you had in the last, and then post your score on Twitter and Facebook to prove how awesome you are.

Like the original Crossy Road, Disney Crossy Road is free-to-play, and it’s very generous with its content. All you need to play is a single character (and you get that the first time you load the game up). There are currently 125 different characters to unlock (and no doubt more to come), and you can pay to instantly unlock any one of them. Or you can simply save up in-game coins to play a lottery machine to get a character instantly. Given that the game gifts you enough coins to play the lottery machine almost every time you boot the app up, you’ll see a steady flow of characters add to your collection. And remember – these are completely superficial. You don’t have to own any character. Ever. There are no advantages to unlock in grabbing different characters. There’s no reward for doing so. If you use a character, it’s purely because you like that character.

Now, some of the characters are more difficult to earn than others. Donald Duck, for example is a “rare” character. Meaning I might have to wait many spins of the lottery machine to get lucky and grab him. But I wanted Donald Duck. He’s my favourite Disney character by a long way. So I bought him. It was $3. I don’t regret that one bit, and hell, on pure principle I want to support the developers of this game anyway, since the original Crossy Road has got me through dozens of otherwise painful trips on the train anyway. 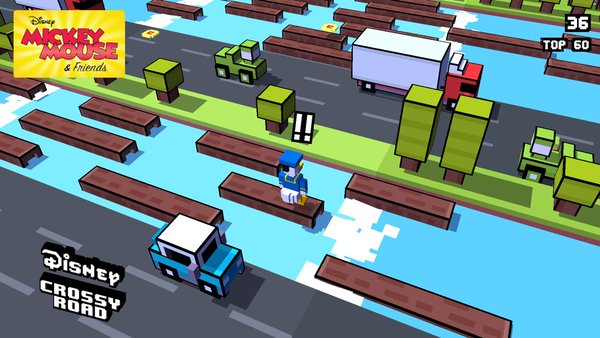 As a nice touch, there are some additional gameplay elements with some of the worlds. Tangled, for example, also requires you to dodge crates that roll down from the top of the screen, Donkey Kong-style. There’s an occasional stampede of wild beasts to contend with in the Lion King world. These additional features don’t change the fundamental gameplay, but provide some nice diversions, and often add a bit of extra challenge for good measure. Top scores for each world are tracked separately, which is a nice touch as well.

I only wish that Hipster Whale could port this game to consoles proper. I can imagine that four player split screen Crossy Road on my PlayStation 4 would be a real party game winner. There’s also plenty of room to add characters for favourite Disney franchises that are not there yet, but really should be. Aladdin and The Nightmare Before Christmas should have been no-brainers for inclusion in the initial launch. That being said, Disney Crossy Road is on my iPhone now, and it’s one of those games that I am going to keep coming back to for months. And probably years.