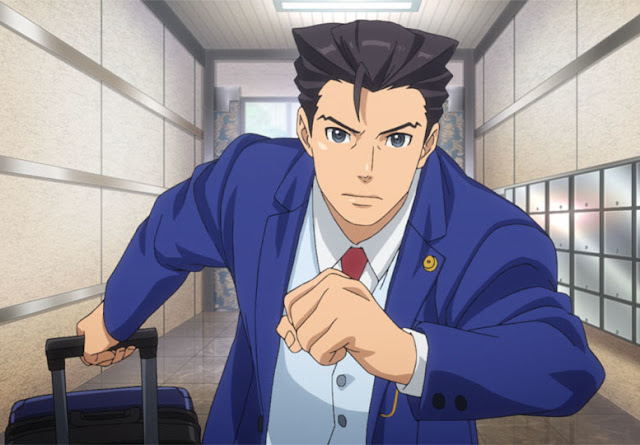 Despite once being marketed as an opportunity to explore the life of a lawyer, the Phoenix Wright video games have always opted to be gleefully irreverent examples of legal drama. Educational software they are not, instead focusing on developing quirky characters through the adversities the legal system handily provides. The courtroom is this remarkably amorphous space wherein German teenagers crack whips at the judge, spirits are summoned from beyond the grave, and parrots are cross-examined, yet matters as extreme as murder are resolved in a satisfying manner. Exceptional suspension of disbelief is required not to toss the game across the room after the first case, but there’s a reason the original trilogy has been ported to half a dozen platforms over the years. Its ability to juggle supernatural elements with situations of gravity is positively uncanny at the best of times.

In essence, the manner of storytelling employed in the Ace Attorney games should be tailor-made for an anime. The visual novels have a tone to them that enables bonkers plot twists, slapstick comedy, and egregious puns, which should all make for a respectable drama that defies genre norms. And, by and large, Ace Attorney’s animated edition does its job admirably. Nevertheless, there are some warning early warning signs that the show won’t be able to handle the more emotional portions with as much tact.
The anime is essentially a retelling of the original ten or so cases from the first two games that launched over a decade ago. Phoenix Wright, an up and coming lawyer must overcome the death of his mentor and ally himself with a young spirit medium to solve crimes and deliver a brand of justice he believes in with all his heart. Along the way, viewers learn Wright’s motivations for becoming a defence attorney in the first place and become invested in the lives of his childhood friends alongside charming new associates. There’s a strong sense of development from one case to the next, which makes this series far more than an episodic set of interesting murder scenarios like some dramas tend to be. Even the more light-hearted cases that seem like “filler” have long-term ramifications, in other words.
Now obviously things could go south, but so far Ace Attorney seems to strive for authenticity wherever possible. I say “possible” because, as far as visual novels go, the Phoenix Wright games can become fairly involved when Wright investigates crime scenes for evidence and witness interrogation (which, by the way, should tell you how accurate to the law this series is). A lot is based on player agency and such scenes can’t be emulated comfortably without a lot of bouncing from locale to locale and affecting the pace of storytelling. That’s fine, though, because the show’s writers seem competent enough to make it click based on a few early feats. Having some tweaks here and there also gives veterans incentive to tune in every week rather than watch an underwhelming, literal interpretation of a solid story.
What the show stumbles with is instead its tone. It’s nothing unsalvageable but a number of minor decisions such as the use of slightly too hammy songs during dramatic moments occasionally put a damper on the proceedings. This is at least balanced out by some pleasant animation. While it is initially jarring to see the patented stiff character movements (which these games practically made an art of) from the Game Boy Advance era all converted into cleaner, more fluid motions, it eventually starts to feel natural. Additionally, the anime format does open up plenty of opportunities for characterisation and comedy alike. Because much of Mr. Wright’s dialogue and reactions took place without him actually present onscreen, there’s newfound potential for the character to really emote. Likewise, the anime format facilitates new varieties of slapstick and other visual gags that simply run smoother in a fully animated setting. The early episodes are already taking advantage of this.
As an aside, Crunchyroll deserves major props for uncharacteristically providing customisable subtitles that take both the native names of characters and their localised equivalents into account. Because countless character names are language-sensitive puns (and sometimes serve a deeper purpose in foreshadowing events), it would legitimately compromise the show. Bravo.
As a whole, Ace Attorney does a wonderful job of serving up thrillers that don’t require tons of brainpower or legal expertise to appreciate. If you’ve never had the cash or patience for the games, well, the time couldn’t be better to give the franchise a chance.

Game Theory: Imagine if Vladimir Nabokov’s Lolita was a game…