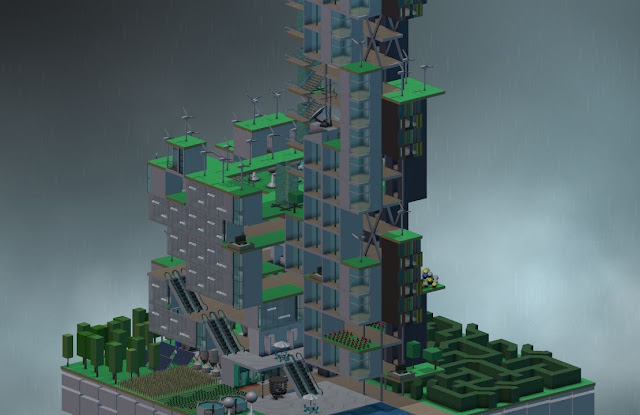 One of the more interesting simulation games on the way is Block’hood, which takes the city building idea of games like Sim City, and then turns it vertical.

With population growth the way it is these days, space itself has become a very real concern in urban planning. The models all point to a similar reality – building out horizontally is simply no longer a sustainable option, so instead the goal for urban planners really needs to be how to grow cities upwards, and maximise the number of people living in each square meter of land space.

This introduces challenges of its own, of course, and that’s what Block’hood looks to address; how it might be possible for future city designers to make use of vertical space in a way that people can live in, and operate in, such high density spaces as normal.

I sat down and chatted with the lead developer behind the game, Jose Sanchez, about what he was looking to achieve with this game, and what we can expect from it as it continues to develop from Early Access towards a full release.

Digitally Downloaded (DD): Where did the initial inspiration for this game come from, and why is it important to you?
Jose Sanchez (JS): Block’hood was inspired by several things. In terms of games, the legacy of Will Wright is evident. I have always been a great fan of his work and it was a pleasure to finally meet him in an invitation for an architectural conference. My background is architecture, so most of the inspiration comes from that field. But in a more specific way, I was very inspired by cities like Hong Kong, Tokyo, and Los Angeles, where I currently live. Movies like Bladerunner portray a very dystopian future, which I loved, but I wanted to contrast that idea with a utopian, more optimistic view. In a way, the utopian/ dystopian cities coexist in Block’hood.

DD: There’s a lot of discussions out there about how sustainable growth of our populations really mandates that we learn to build our cities intelligently vertically. Your game clearly addresses that topic, but is it like Sim City in that it takes advantage of real-world design theory?
JS: Absolutely, every city building game requires that you formulate a hypothesis or a model of how the city works. My model was the architecture discipline with an emphasis in ecological relations; interdependence. The pressure for optimise space is real but not everywhere. In Block’hood you are certainly invited to think of that possibility. But you can generate blocks that are more horizontal as well. The ecological model is unavoidable though.

DD: There are a number of simulation builder games that have genuine education value; Sim City but also the likes of Transport Tycoon and A-Train. Do you see your game as also having educational value/ could you see schools making use of it? Why/ why not?
JS: Sure, we have always thought of Block’hood as a game with educational value, and is something we want to further develop in the future. The concepts of ecology and entropy are very well presented in the game, and based on real world data. The most challenging question is games like Block’hood can really be used to design neighborhoods or civic participation, which I do believe it can, but we need to further develop the research side of the game, where a player can play the game with real world values. This is something we are currently hoping to fund with grants and potentially offer for free.

DD: What kinds of challenges does this game set the player that wouldn’t be an issue in a game like Sim City or City: Skylines? Or to put it another way – are there unique challenges that you experience when you’re trying to build a city upwards?
JS: Most city building games start from the model where you have a certain amount of money, and you have to be smart of how to use those resources. This model is very clear and sets up the pace of the game. I strongly wanted to offer an alternative model, one in which you can do anything you want from the beginning. If you have all blocks available and an infinite amount of tiles available to create, where is the challenge? The model we propose in Block’hood is of taking responsibility for what you create. You can do anything but you have to consider carefully your moves, as you might be building problems rather than solutions.

The switch is to think of an economy of abundance rather than one of scarcity.


DD: In the “AAA” space for simulation games – stuff like Cities: Skylines – the amount of data that runs through the engine, and the way it impacts on your growing cities, is enormous. It must be difficult to balance all that stuff when you’ve got entire teams of people working on the game. How do you manage the need to put enough complexity into the game to appease simulation game fans when you’re a small independent studio?
JS: The game uses a model that is more simple but very powerful. Imagine the game as a trading card game, where each card can do a simple action. Games like Magic the Gathering (MTG) or Hearthstone are good examples. Instead of thinking of what is the model of a city and how each part contributes to a pre-existing model, we consider how isolated ‘blocks’ (our cards) interact with their neighbors or the community as a whole. We are free to come up with new blocks with different data and exciting behaviors that affect the whole simulation, but there is never an underlying system to be satisfied. The balancing of blocks is something that we have been doing extensively but the model itself makes the computation of interactions rather manageable for a small team. Like MTG Block’hood has a great capacity to grow and allow players to always play with a subset of the blocks available.

DD: Can you elaborate for me in a little more depth what we will see added to the game as it gets closer to its full release and beyond?
JS: There are two main modules that we have been working on. The ‘world module’ will allow a player to have a larger territory and create plots (the current terrain in the game) that eventually will interact with each other. Imagine something like what Spacechem does when you zoom back from the main view. The ‘Coexistance module’ will introduce inhabitants in form of people and animals. Animal farms, and different city lifestyles. We have many interesting ideas but we don’t want to spoil too much…

DD: Do you see potential in bringing this game to console or mobile? Why/ why not?
JS: We would love to bring it to mobile as it would be a perfect fit for tablets, but that depends on how the game sells and if we can optimize it enough. 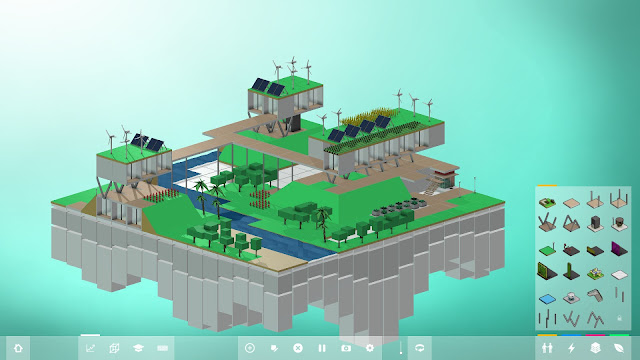 DD: I know it’s probably early to be thinking about this, but have you got any thoughts about what you might like to do after this game?
JS: I actually started developing another game before this one, but I had to stop as it became too challenging. I was still learning Unity at the time, but now I feel I have much more experience to approach a more ambitious project. Some of the themes would resonate with Block’hood; sandbox/ design game, but the context will be very different. We are still far from this… so things might change.

DD: How have you found the process of independent game development, and how does it shape up as a business opportunity, now that the space is so saturated?
JS: I think the saturation is good as there are resources and information for people like me, new to the business, to learn and grow. The market seems still very open to new ideas and I think we are going to see more and more niche games as opposed to the classic genres. We are learning as we go on how the company would operate and if we want to grow, and how much. It has been comfortable to be such a small team but we look forward to addressing more ambitious projects.

DD: Finally, what games are you playing at the moment?
JS: ‘The Witness’, ‘Factorio’, ‘Scrap Mechanic’. I’m really looking forward to ‘Riot – Civil unrest’ as well.

Coming to cinemas in 2018: Dynasty Warriors!