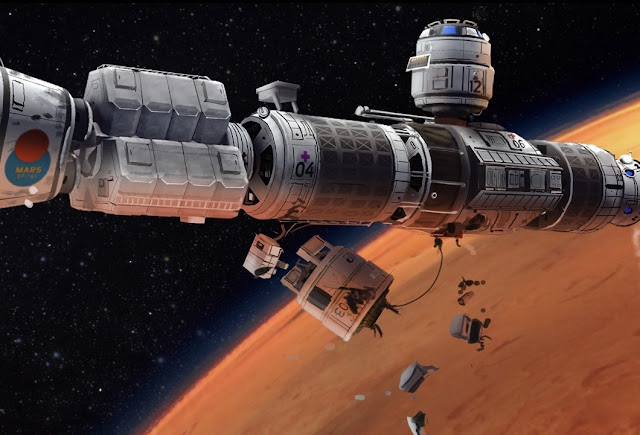 Tharsis is the most disturbing board game I have ever played. And on that basis, while I’m not sure it’s appropriate to say that it’s a good game, it has certainly left a memorable impression.

Related reading: The PlayStation 4 hasn’t got too many board games at this stage, but it does have Armello, which is one of the best board games you’ll ever play. Nick’s full review.

As a board game for one player, you take control of the crew on a space trip to Mars. Unfortunately, something has gone very wrong (a catastrophe of the Gravity variety), and, having lost almost half the crew, and all the food, you now need to try and survive as the ship limps its way to its destination.

It’s not easy. In each “turn” you give each of your shipmates a single task for them to complete, whether that is repairing a part of the ship that has sustained damage, or complete another task to try and improve the condition of the interstellar boat. At the end of each “turn” the ship sustains new damages. Each “turn” the survivors get a little more tired, a little more stressed, and this means that they are less effective in their work. 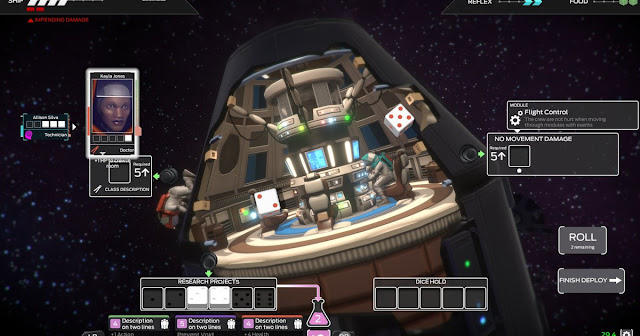 Work is represented by dice rolls. A fully fed crew member gets five dice. A starving one gets one. All actions on the ship require players to roll the dice, and get the total up to the minimum required to complete an action. So, for example, if a part of a ship has sustained damage that totals “23 points,” you’ll need to use one or more crew members to roll enough dice to reach 23 or more. If you’re fortunate enough to exceed that number, you can use any excess dice you have to research science bonuses, grow food (which replaces the dice that crew members lose with each roll), or just relax to reduce those stress levels.

There are a couple of additional resources that need to be managed, too. When damage is registered on a part of the ship, there are also certain dice scores that become very dangerous. A damaged hull might hurt a crew member working on it on a roll of “6”, for example. Or it might make a precious dice disappear into a void on a roll of “4”. “Assists” are a rare resource that prevent that effect for one turn before disappearing. So it pays to tackle the most dangerous tasks only when there are a few assists stockpiled. The hull can only take so much damage before it breaks into pieces, however, so often you’ll be forced to risk repairs without assists in the bag else the ship break apart soon after.

Each crew member also has a special ability that, if there’s enough dice left over to activate, can really benefit the cause. One can instantly improve the structural integrity of the hull. Another can replace dice for all his allies nearby. These are powerful abilities, but good luck getting into a position where you can actually activate them. 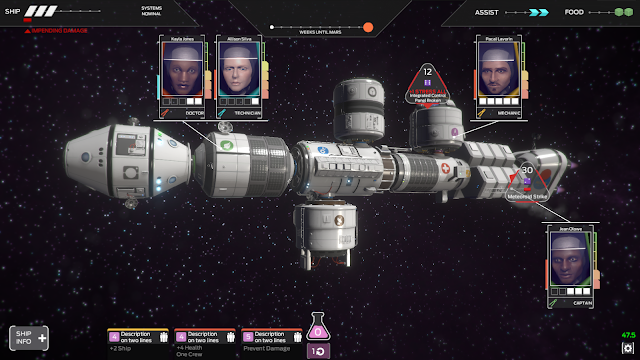 See, while the systems of Tharsis are deep and complex enough to work on paper, this is a game with a real sadistic streak that means it wants you to struggle. Dice genuinely seem to be weighted to provide bad luck at every turn, ensuring that no matter how well you play, you’re still going to be struggling.

And that’s when the game hits you with its centrepiece feature.

Food is almost certain to run out. There’s simply no way that you can invest enough of your team’s limited capabilities and resources in keeping food supplies up, while also keeping the ship in good shape. And as food starts to run out, and the number of dice you have available to you starts to dwindle, making it look ever more unlikely that you’re going to be able to keep things together and deal with the frequent disasters being inflicted on you. Then you’re going to be presented with a difficult choice indeed.

One of the dead crew members has been preserved in the ship’s refrigeration. You have the option of having your crew eat this fellow’s flesh.

I’ll just let that sink in for a moment. Cannibalism is in theory optional, but in practice if you want to “win” the game… 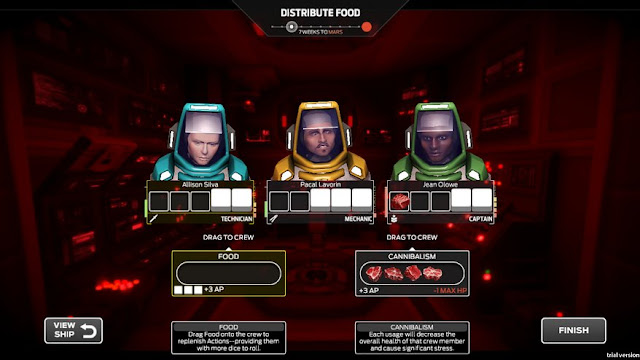 The meat from that dead crew member provides a big boost to your survival opportunities. At first. A couple of turns later your crew is going to be getting hungry again, and this time around there isn’t an existing dead body just lying around to provide some emergency steaks.

You can see where I’m going with this.

The moral conflict and debate around this topic – cannibalism against the potential of survival – is intense. It’s one that has been debated in the real world, and there are real world examples of people being forced to make this decision; remember the Uruguay rugby team whose plane crashed in the Andes mountains in 1972?

Imagine if you had to. It’s sickening to sit here and contemplate eating a human being, but in such desperate circumstances, it’s a literal decision of life and death, and it’s at that point where we start to see the break down of our concepts of “morality”… or it’s perhaps at these times that we realise that morality is more a social construct than a truth. Tharsis does its absolute best to try and reinforce the moral conflicts around this theme. As the crew starts to consume human meat, the dice become covered in blood. The narrative, thin as it is, becomes a deeper and deeper horror, reflecting the madness, paranoia, and fear that must inflict a small group of desperate, isolated survivors, who are literally putting one another on the dinner menu. 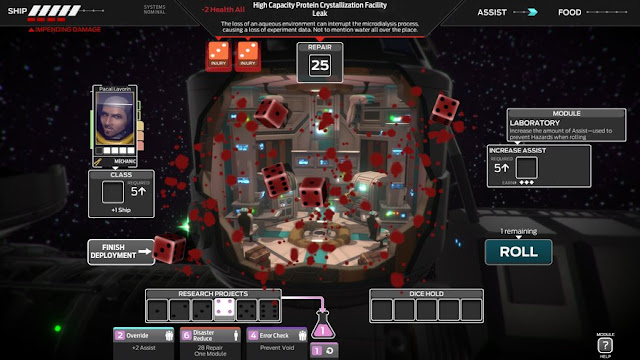 I wish it wasn’t a board game, though. This theme is far, far too intense for a board game to handle. I need to care about the crew members more than I do for the fact they are butchering and eating one another to really hit home. As it is, I see them as playing pieces, and while the board game mechanics do a very fine job in encapsulating the desperation and raw struggle for survival, dice rolls and (relatively) static images are too abstract to carry with them real emotional weight.

Related reading: For a strategy game with a less disturbing theme, Nobunaga’s Ambition: Sphere of Influence on the PlayStation 4 is as good as they come. Nick’s full review.

And I do wish that the mechanics didn’t need to (apparently) cheat to manufacture bad luck to force players to start making the tough decisions. And, indeed, I wish that there was more meaningful consequence to discourage the cannibalism, in order to turn it into a actual moral decision, rather than part of the process. Frankly, to have a hope of “winning,” you do need to get stabby with the crew. Because I didn’t have a connection with the crew, I really needed something else to make me second guess what I was doing. Perhaps if the game were to force your PlayStation home theme to change to a giant dripping hunk of human flesh and a “you did this” message?

Jokes aside, Tharsis is an incredibly meaningful game that has picked a woefully inadequate format to express an innately intelligent idea. If this was a narrative game, in the vein of Telltale Games’ work or Life is Strange, then we really would have had something special on our hands. As it is, we have a board game that goes out of its way to be unfair so it can make players make decisions that should have great emotional impact, but in practice become a quite pragmatic stepping stone towards victory.

For more information about that 1972 plane crash survivor story (and it’s a good one), read this book:
Share this

Everyone, I would like for you to meet Danica Dee