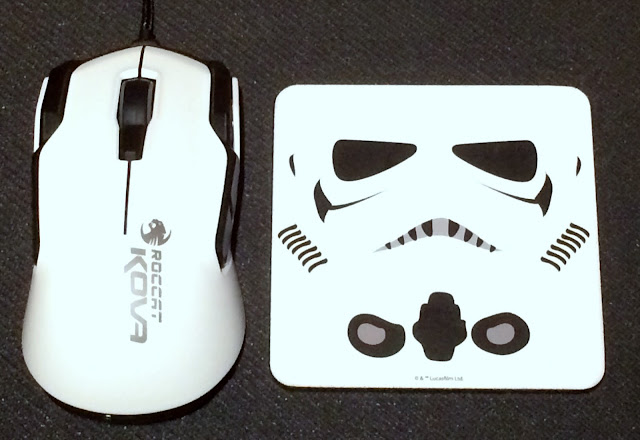 You’ve seen the new Star Wars movie, right? The one with lightsabers, tie fighters, Jedi, a homicidal planet, and stormtroopers? The stormtoopers are great. They’re my favourite part of the entire series.

But what have stormtroopers got to do with the Kova gaming mouse? Well, it could be my imagination, but I’d say that Roccat’s new device looks strikingly similar to the armour-clad warriors from the latest film. The Kova’s white variant comes with a comparable paint job, the same sinuous curves, and mean black highlights. And, even if you don’t quite see the resemblance, we can at least agree that it’s the kind of mouse that you’d expect a stormtrooper to use. That’s enough for me. I like it already.

But computer mice are about more than looks, so it’s a relief that the Kova performs decently as well. It’s Roccat’s mid-price, mid-range gaming mouse and, while it lacks some of the more outrageous features that they’ve built into their mice over recent years, the feature set is comprehensive enough to satisfy most users. 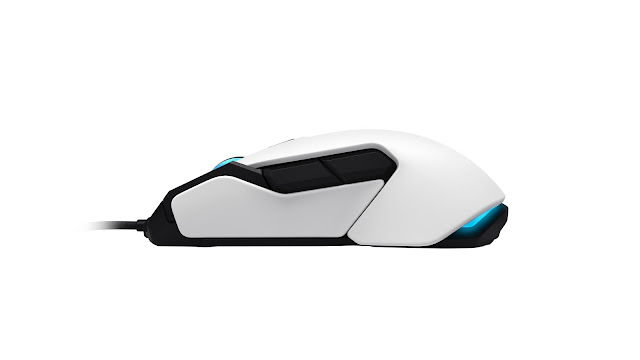 The Kova is built around a 3500 dpi optical sensor, although the sensitivity can be doubled using the Overdrive mode nestled in Roccat’s comprehensive driver package. This provided good accuracy in all the games I threw at it, turning in a pleasing performance in Quake 3 and other high-accuracy titles. On the flip side, tests using MS Paint showed that the Kova isn’t as smooth as some of the other high-sensitivity mice we’ve tested, such as the QPAD 8K or the Mad Catz TE. However, given that Kova feels crisp to use, and that it’s cheaper than either of those two mice, this really isn’t much of a problem.

Physically, the Kova’s ambidextrous design is rather unusual. Gaming mice tend to fall into two camps – they’re either small and responsive, or they feature a pronounced hump for those who favour a palm grip. The Kova is like an average of the two. It’s narrower at the front – good for fingertip grip – but it also has a wide rear, which mimics the palm-filling profile of a larger mouse. This is a reasonably comfortable compromise, and should mean that most players will be able to adapt to the shape fairly quickly. However, be aware that the side buttons are positioned quite low on the chassis, so if you’re in the habit of placing your thumb beneath them then you might suffer a little friction from contact with your mousepad.

All of which brings us to the Kova’s most notable feature – its flexibility. Those side buttons have just enough resistance to prevent accidental clicks, and there are a whopping six of them. Four are positioned in conventional fashion at the midpoint of the mouse, with two others to the left and right of the main buttons at the front. Combined with Roccat’s Swarm driver software, these offer an impressive range of customization, allowing one-press access to everything from media shortcuts to user-defined macros. There’s also support for fancy lighting effects via AlienFX and Talk FX, together with user-definable illumination for the mouse wheel and rear bumper. Finally, this mouse supports Easy Shift [+], a neat feature which modifies the behaviour of the buttons, allowing you to load the mouse with up to 22 functions at a time. 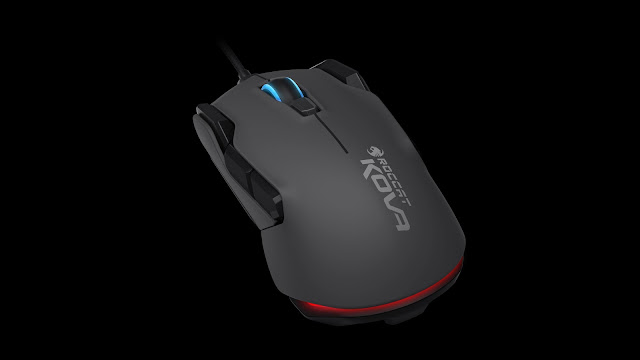 Related reading: All of our Roccat hardware reviews.

As is usual for Roccat, the Kova’s build quality is second-to-none. Alongside this, its software, while more suited to enthusiasts than beginners, means that this mouse can be made to perform exactly as you want it to. Despite my minor quibbles about the sensor and the shape, this makes the Kova a solid mid-range choice. I also think that it looks like one of the stormtroopers from Star Wars. It gets an extra half-star just for that.