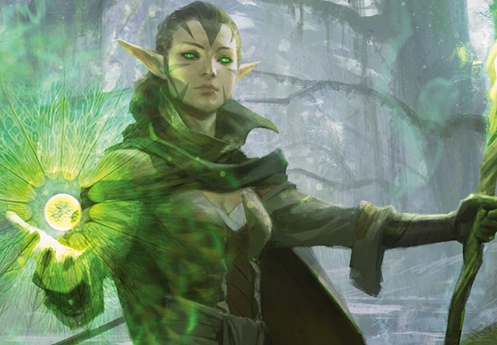 Puzzle Quest is starting to develop into a very noteworthy franchise. The core two games in the franchise are quality, but the licensed stuff is really checking boxes as well. The Marvel-licensed Puzzle Quest was genuine fun in its own right, but the new Magic: The Gathering Puzzle Quest is a really high quality game.
Related reading: Another great example of a match-3 RPG, Puzzle & Dragons Z, is available to people with the Nintendo 3DS. Matt’s full review.
As with all Puzzle Quest games, Magic: The Gathering – Puzzle Quest is a match-3 puzzle game that tasks players with matching up gems to power up your hero character’s attacks, and then those attacks need to down your opponent before they can do the same to you. It’s turn based – so you’ll take a turn trying to match up three icons, then the other side get their turn. All of that will be immediately familiar to anyone who has played a Puzzle Quest game.
What is different is that the gems that you’re matching up this time are used to summon cards, which will do the fighting for you. In the real Magic: The Gathering, players make use of resources that they play to their side of the board to summon their characters. Here, the gems that you’re matching up represent those resources. You’ve got access to a hand of “cards,” and you can pick the order with which those cards are summoned to the table. The more gems you match up, the quicker the cards are summoned. This is all explained in a tutorial that runs for around ten minutes, and no, you don’t need to be an existing fan of Magic: The Gathering to understand how this one works. 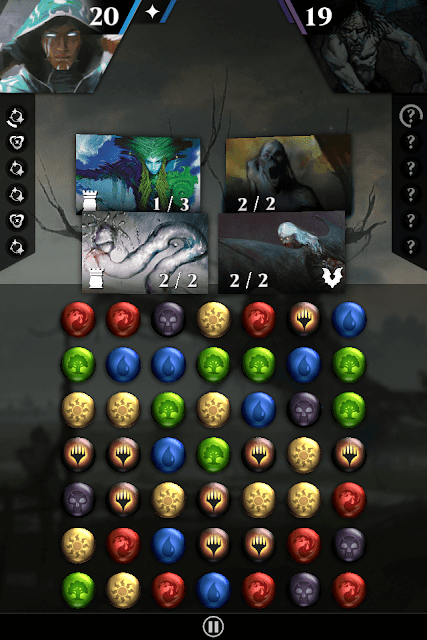 But if you are a fan of Magic: The Gathering, then I think you’ll love just how well it manages to abstract the complex rules of Magic into a match-3 format. Creatures that you summon through the mana can be specialists in blocking or disrupting the opponent’s creatures, just as in the real game. There are spells and abilities that can enhance the creatures. As in the real card game, there are five different “colours” of creatures – white, black, red, blue and green, and while you can summon these with any colour gem (whereas in the card game the colours need to match), each of the colours has a distinctly different play style. So, if you’re like me and a fan of the white decks in Magic: The Gathering, you’ll also be a fan of white builds in this game.
The narrative, thin as it is (as you would expect for a free-to-play game), is nevertheless set in the Magic: The Gathering lore, and this too will be something that fans of the card game can really connect with. Favourite characters from the fiction return, enemies will be familiar, and the same dark fantasy atmosphere is palpable through the art. Non-fans will simply love the art without understanding the lore behind it, because it is gorgeously detailed. It’s dark, sure, but every character, card, and icon is meticulously detailed, and very much in keeping with the card game, which is famous for the quality artists that work on each card’s design.
Because the art is so gorgeous, Magic: The Gathering – Puzzle Quest has an easy way of hooking players in; each new card earned feels like a reward in itself. There are a load of them to earn, and building up “ultimate” decks takes a lot of grinding. Of course, this is where the monetisation comes from as well, with players able to drop some real money to buy packs of cards that are much more likely to hold rare and powerful creatures. 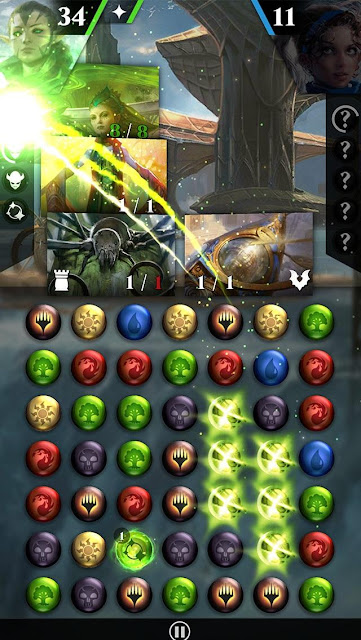 As with all good free-to-play games, if you’re not interested in paying you’re in for a grind to make the same progress through the adventure, but it’s possible to experience everything that this game offers without a cash investment, and I feel that the game does a decent enough job of handing out both premium in-game currency bonuses (which can be used to purchase those special boosters), and balancing the difficulty that the grind doesn’t become too excessive. Of course, the game does want you to spend some real money, but the game itself is of such a quality that that being asked to pay for it will not distress a lot of people, I suspect.
And, as with all free-to-play games, the developers have provided a massive wealth of content to try and keep people playing. As I’ve already mentioned, there are a load of cards to collect, and there are a load of Planeswalkers, who represent your in-game hero, to level up along the way. Each Planeswalker represents a specific colour – so, if you want to have a green deck, you need an associated green Planeswalker. These characters have their own special abilities beyond summoning monsters and casting spells that become more powerful as they level up, so to have a strong mix of a couple of Planeswalkers, you’re going to need to spend quite a lot of time grinding away on the levelling up.
The story mode is the good place to do that, and that’s also the place you’ll go to test out decks before wading into the main event. As with the real card game, Magic: The Gathering -Puzzle Quest is at its best in multiplayer, and from what I’ve seen, the matchmaking (always random) does a good job in pulling up opponents of roughly the same skill and level, so it’s rare for a match to feel unbalanced. 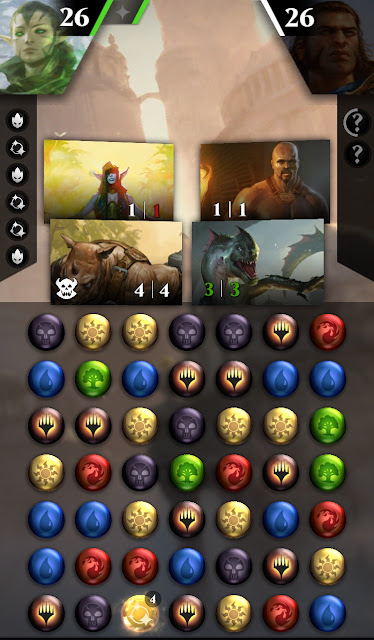 Of course, as with all match-3 games, there’s a certain frustration that can creep in when the random nature of the gems dropping on to the board can seem to benefit the opponent. I’ve lost a couple of matches where I was in a good position because, as sheer luck would have it, the opponent was able to get a massive chain going through the pure randomness of gems falling into place, meaning he or she was able to summon a whole bunch of creatures and spells and turn the tables completely on me.

Related reading: For a more traditional Magic: The Gathering experience, Duels of the Planeswalkers is on iPad, PC and consoles. Check out Nick’s review of one of the series here.

But that comes with the territory of the genre, and there are times luck swings your way to make everything feel right again. Magic: The Gathering – Puzzle Quest is a genuine quality free-to-play game. As with all match-3 games, it’s not the most in-depth or complex experience available, but the Magic: The Gathering license is used well, and the aesthetic design makes is the perfect casual time-waster for those train trips or quick breaks.