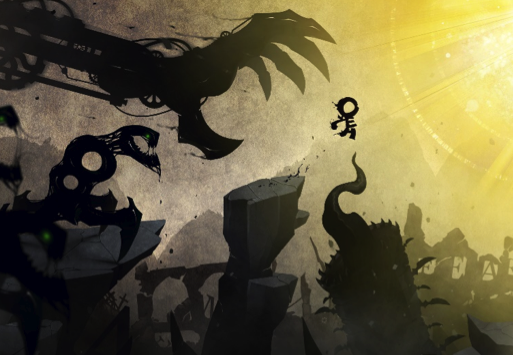 At a glance, one might mistake Typoman for the popular 2D platforming/puzzle game Limbo. While it shares some similarities with Limbo thanks to its stark aesthetic that is heavy on the black, Typoman falls short of that game’s level of polish while still carving out its own unique identity.

Are you a “Hero”? Well, here you are – literally. No, I mean that. Your character is built from the letters H-E-R-O. Think H for the legs/lower body, E for the torso, R for your arm and O for the head. Through the game you’ll be picking up letters and using them to create words. Need a platform? Spell it out and then you have one. This concept is used over and over again throughout the game, and is clever in the same way Scribblenauts is. This one is unique, however, because where Scribblenauts is a pure puzzle game, this is a more traditional skill-based platformer.

It is actually quite rewarding to see your words come to life and create something. That being said, Typoman is far more limited than Scribblenauts. These words are assigned to specific puzzles, which means really only a certain word is going to do the trick. Need to create the word ‘ON’ to power something? Great – that’ll work and you’re not going to be able to use the letters for much else. But when you need a PLATFORM? Well, words like form, rot, map, tap will not help in the least, and you do not have the opportunity to be more open with your letter choices. You’re stuck spelling out the words the game decides to let you spell, limiting the creativity you will naturally want to indulge with a spelling game like this one. 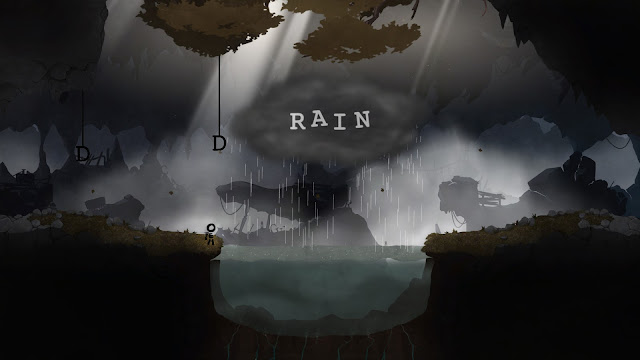 Playing with the letters themselves is a mixed bag. I enjoyed that they had some heft to them as I dragged them back and forth on the gamepad as I needed, but the mechanics while dealing with the letters themselves was clunky and slow. I wish I could have jumped around with a letter in my character’s hands, or that the process of moving the letters around was a faster one. Some of the challenges have a time component, so now you are not only battling a jumble of mismatched letters, but also the speed with which you can manipulate them.

Those negatives hold back much of the fun Typoman has to offer in its unique package. Thankfully the touchscreen is handled very well on the gamepad through two different mechanics. The first is a hint option, which tries to create a sentence to help you along, almost like asking someone at a spelling bee to use the word in a sentence. If you need to use the hint button again, then it calls out your needed word. As a result, if you wish to rely heavily on the hint button, you can zip through the game much more quickly, though doing so would likely drain most of the satisfaction out of Typoman. The other way in which the screen gets used is the Scrambler command. Think of it like using the shuffle option in SCRABBLE where letters get sorted out and rearranged to try and help spark your mind’s sorting of them.

Typoman uses these letters as a puzzle element, but there is also plenty of platforming. There is definitely an element of trial and error at play, much like Limbo, where I often died to figure out how to best proceed forward. That being said, Limbo was far more polished than Typoman, which is thankfully very forgiving on the checkpoint front, but far less so in its actual level design. The best platformers feel fair yet challenging, testing your reflexes but fully spelling out what you are dealing with on the screen. Often times Typoman less-than-precise and frankly a little cheap when you have to get your little man to make blind jump while being rushed, as you’ve got little ida about what you actually need to do next. 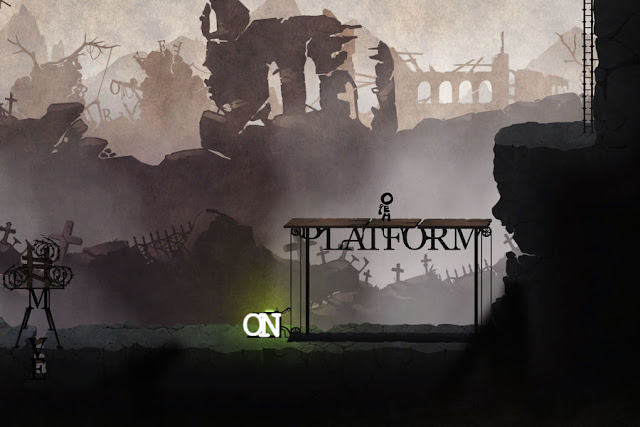 Typoman’s aesthetics are its strongest card, as is is haunting, creepy and delightful at the same time. The developers deserve plenty of credit for fully realising this grim-looking world where something as abstract as letters manage to fit in against a grey, dank background. The animations are simple yet effective and while the storytelling is minimal at best, with no narration to guide you along, the areas themselves offer plenty of environmental storytelling if you take the time to soak them in.

Typoman deserves plenty of credit for creating a visually interesting world and one that requires players to figure out a way to proceed through it by literally spelling things out. This makes for a great initial impression due to the uniqueness of the game mechanic. However, the goodwill that it builds at the start does starts to suffer as you realise just how limited the spelling mechanic can be, and start to run into the rough edges around he platforming.