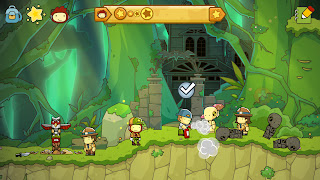 Imagination. Its a wonderful thing when utilized to its full extent and people can whisk themselves to the most fascinating of paradises. Imagine, if you will, a world that you could interact with in the most primal way. You want it to be night, and *poof* it is. Feeling peckish? Magically some duck or rabbit appears in mint sauce.

You are now in the world of Scribblenauts.

The concept of this great series has always been simple but compelling. A brief backstory shows the player (Maxwell) and his sibling have been granted unimaginable power; the ability to modify everything through language and a magic pad. The pair choose to use it to for wicked mischief. Unfortunately (or fortuitously, depending on your own moral compass) they targeted a witch whose powers rival their own, and decides to place a curse that will turn the sibling slowly to stone. Maxwell’s powers, great as the are, cannot undo this justice.There is however, one way to save his loved one. Prove that he sees the error of his ways, atone for his acts of evil through helping others and through a weight of good deeds Maxwell can reverse the curse. 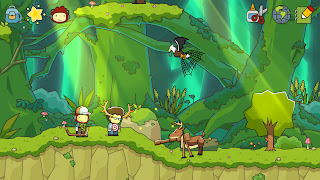 And so the play begins. Visiting the breadth of a continent (or two), the player comes across many varied troubles confronting the inhabitants of the Scribblenauts world. Using a concise and intuitive interface, the player then begins to, using their imagination, invent solutions to these troubles using the magic wordpad. Anything you can dream of springs to life. A huge in-game vocabulary allows virtually all dictionary words that you could think of to be at the at your disposal (with natural exceptions of trademarked and proper nouns). A rich and occasionally dark sense of humour combines healthily with this variety to ensure a great deal of fun. For instance, Monty Python fans will appreciate the ability to chop down a tree with a herring!

Scribblenauts has a distinct, cartoonish feel to it that ensures it appeals to that largest of ranges; its for kids and adults alike. A strong moral core allows this game to be a wonderful learning tool for children. The game’s core storyline features the very important theme of responsibility. Performing harmful acts will result in serious consequences: Inaction to fix a zombie infestation, for instance, could result in the destruction of the world you are trying to save. Further, the many varied ways in which the player can interact with the world teaches resourcefulness should its core values be appreciated 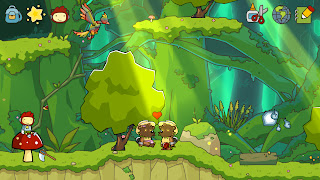 Despite promises on the box for multiplayer, it offers only a minimal experience for the additional players. So minimal in fact, it is still best to count Scribblenauts as a single player game. Good thing the game’s replayability is solely dependent on the depths of the players imagination and so it is potentially limitless.

Scribblenauts appeals to those who utilise their brain. It is cerebral. Its fun is dependent on the player’s ability to solve problems and the degree of fun it offers is heavily influenced by the ability to think up unorthodox solutions.

As such it’s not for everyone, but boy is it fun.

Rainbow Moon, the most hardcore of hardcore RPGs, gets a sequel