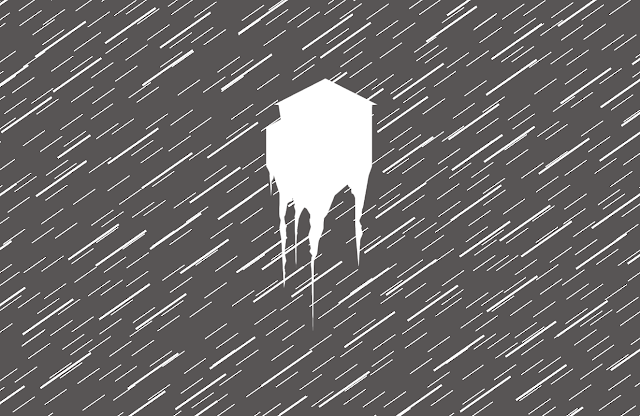 An artsy little indie game that is heavy on the narrative and has a striking minimalist aesthetic… you can probably guess where I’m going with this, right? Right. I love Three Fourths Home. It’s the kind of game I want to see an awful lot more of.

Related reading: Actual Sunlight is another example of a great indie arthouse game on the PlayStation Vita. Matt’s full review.

It’s effectively a short, interactive story, which follows a girl as she drives home during a heavy storm. She’s on the phone with her family, and they talk though various issues that they’re having. Players have control over the girl’s responses (generally a choice between two answers), and the answer they choose will affect how the dialogue plays out. That’s about as interactive as Three Fourths Home gets, but it’s the sheer normalcy of the conversation that is so fascinating, and the core to the game’s thematic depth.

The family unit is a fairly standard, suburban-dwelling unit. There’s the mother and father, the brother and sister. The father drinks, heavily, while complaining about “pain”. The brother struggles with teenage angst, channelling it into writing stories that you might assume are lyrics to a Nick Cave song. The mother struggles to keep it all together. The sister (you), struggles with school and maintains a certain distance from her family, which bubbles away as a clear point of resentment between the four of them. 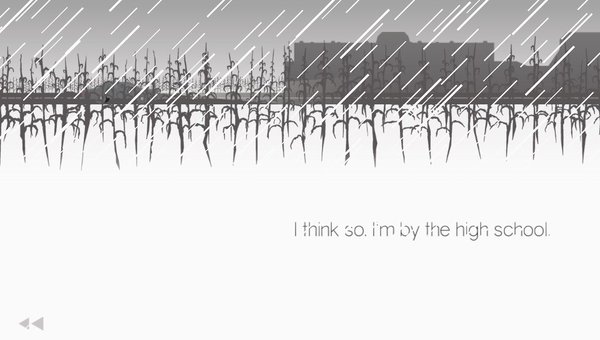 What makes Three Fourths Home so effective is the way that it layers those emotional challenges that each of the family members grapple with on top of some incredibly mundane conversations. These are conversations that will be familiar to almost anyone reading this review, because they are conversations that you’ve had with your own family at some point. At the start of the story, each of the characters are exchanging pleasantries and joking with one another; it’s a perfectly mundane kind of conversation. It’s innocent. It’s innocuous. It’s really quite boring and will make you wonder whether this game will have any value at all over the longer term.

But it doesn’t take long for the cracks to start showing in the family unit, and the conversations become more directed, more probing. There is family diplomacy at work, forcing each character to talk around the issues they’re having without ever actually addressing them directly, for fear of upsetting someone else in the family. It’s a defence mechanism that almost all family units engage as things start to fall down around them. But despite the diplomacy, there is a distinct tension in the air, because everyone knows what everyone else is leaving unsaid, and that’s when the storm hits, both literally and figuratively.

It begins as gentle rainfall, but as the conversations become more purposeful, and start to lay bare the conflict running through the family, that rain becomes a storm. By the time the son is retelling the sister (again, you), the story that he wrote – which contains some terrifying insights both to his own psyche and the family unit when taken as metaphor – there are sirens blasting in the background as tornadoes start touching down to earth. The symbolism is quite overt, which is a little disappointing and points to the relative youth of games writing as a storytelling form when compared to literature and/or film, but it is nonetheless impactful and intense. 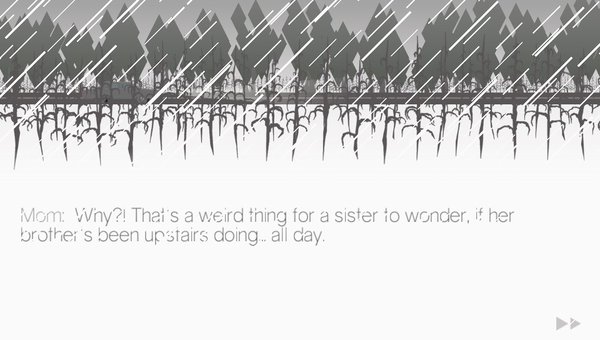 But more than the narrative, what I loved most about Three Fourths Home is how it meaningfully addresses the progression of the story as a gameplay mechanic. You need to be pressing a button for the girl’s car to “drive” – you don’t have control over the direction that she does drive, as it’s a linear start-to-finish trip from left to right across the screen, but you do have control of when the car goes and when it stops. Take the finger off the button and the “action” will stop still, waiting for the button to be pressed down again. Without the car being in motion, though, the narrative can’t progress. You can’t cycle through to the next line of dialogue, and you can’t make dialogue decisions of your own. For a visual of this in action, imagine having a cassette tape in a player that will only work if you’re active holding down the play button.

I found this to be a fascinating exploration on nature of linear storytelling within games. In any game – including the supposed “open world” and “open ended” games like The Witcher 3, Mass Effect or Grand Theft Auto, the sensation that you have control over the narrative is an illusion, because you don’t. As long as you’re interacting with the game in the way that it wants to be interacted with, then you’ll experience the narrative the developer has implemented into the game. Take your hands off the controller, however, and while the game might not stop still like it does in Three Fourths Home, the storytelling certainly does.

In being such a simple, focused game, Three Fourths Home really brings into focus the smokes and mirrors that go into storytelling in games, with developers and publishers falling over themselves to provide the illusion of player control, only to be, still, the ones with ultimate control over the narrative storytelling.

The PlayStation release of the game includes an epilogue chapter, which follows a similar storytelling style, but involves the girl waiting for a bus while phoning home – the implication being that she has travelled far away from home by now. It’s a neat bonus that helps to round out the package further, but it’s very brief and, disappointingly, does little to advance the characterisation of anyone in a meaningful manner; we don’t learn anything from this epilogue that we didn’t already know.

The game is over in about the time it takes to read a short story, even with the epilogue thrown in, but Three Fourths Home is an exceptional little storytelling experience that shouldn’t be ignored on account of its length. Highly atmospheric, beautiful, and smart in the way it engages the player, it’s the kind of independent game that can only ever hope to find a niche audience because it never meets the mainstream expectations of what a game should offer. But for those that do discover it, it’s yet another clear example of the emerging arthouse game development scene; games designed first and foremost as works of art, and piece of entertainment for consumption second (if that factors into consideration at the developer’s end at all, that is). And that aggressive pushing of the “games as art” rhetoric is something that I like to see.

The Friday Ten: Matt’s ten most played Wii U games in 2015