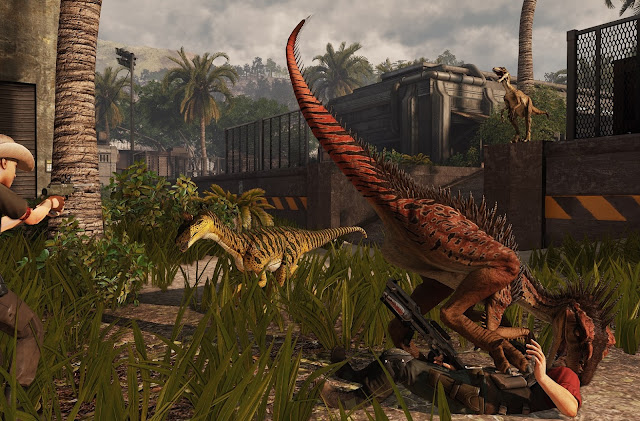 Okay, try to imagine yourself in Primal Carnage: Extinction. You get your first look at this “six-foot turkey” as you enter a clearing. He moves like a bird (kind of); lightly, bobbing his head. And you keep still in the cover of a bush because you think that hopefully his visual acuity is based on movement like T-Rex, and he’ll lose you if you don’t move.

The thing is, when playing Primal Carnage: Extinction, it’s safe to say that Dr. Alan Grant is probably the worst person to get advice from, seeing as that the dinosaurs in this class-based online human versus dinosaur shooter act nothing like their real-life counterparts. I have loved dinosaurs ever since I was a kid. Hell, I even got up on stage with the characters from Disney’s live-action 90’s Dinosaur sitcom and danced. But as we all know; just because something has awesome dinosaurs it, does not automatically give a game a pass.

There are issues with Primal Carnage: Extinction from the outset. It’s nearly impossible to find your opponents on many of the maps in the game; the cover system is too robust. It’s just too easy to seek cover and have nobody find you for an entire match, and just about everyone has figured this out already. As a result, I spent most of my time in the survival mode, where fighting AI dinosaurs was never an issue, as the AI comes out claws blazing and constantly out in the open. 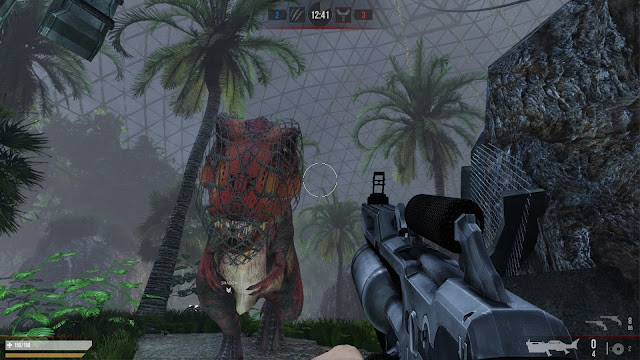 The game itself isn’t all bad when there is the AI involved. Teaming up with a bunch of people online in Survival to take on waves of dinosaurs was a blast, even if the execution of the game itself was overall underwhelming. There were times where dinosaurs would appear in random places that were tough to find and others where sniping a dinosaur resulted in its death five seconds later as one pops up right behind you. But in a group of friends, it’s hard to take it all too seriously. Get to the Chopper is equally fun, where the dinosaurs need to prevent the humans from taking over multiple bases before finally getting to the helicopter for their escape. Both of these modes were fun, though ultimately once I finished playing them a couple of times, I didn’t feel the desire to jump back in again.

As far as balancing goes, I never once made it past the fifth wave of Survival, at which point the first “boss wave” incorporated invisible raptors and I found those impossible to deal with. It’s certainly not impossible for everyone, as the PlayStation 4’s trophy rarity function shows (i.e. people have trophies that show they’ve moved past this stage), but to me it is hard as nails, and gets harder the more players I add to try and help me out. I have also never played a round of Get to the Chopper where the humans actually lost. There was one particular round where myself and another dinosaur ganged up on a human player, pouncing on him over and over again like a velociraptor on Robert Muldoon, but ultimately the time ran out and the human managed to kill the two dinosaurs in an unannounced “extra time”.

Aesthetically, Primal Carnage: Extinction suffers the same font size issues as too many other PC game ports to console. Despite my large living room television, the font used in most menus is so hilariously tiny that I had to get off my couch and get closer to the screen to actually read what was written. This seems to be a weird bi-product of PC to console ports. I’m not sure why developers can’t simply make the fonts bigger and tweak the menus to accommodate. It’s not a huge issue, it just goes with the overall unpolished feel of the game as a whole. 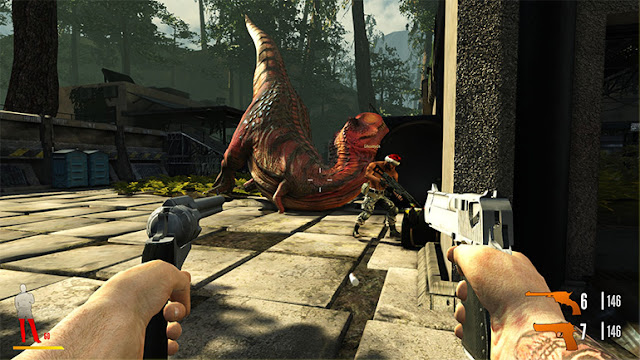 Primal Carnage: Extinction certainly sets itself apart from other online multiplayer shooters out there. With a few different modes and a couple of maps for each mode thrown in, there is some degree of fun to be had in the game. How long that fun lasts though is simply based on how much enjoyment a person can get out of online shooters in general, and just how much patience they have for balancing issues and mechanic design flaws.