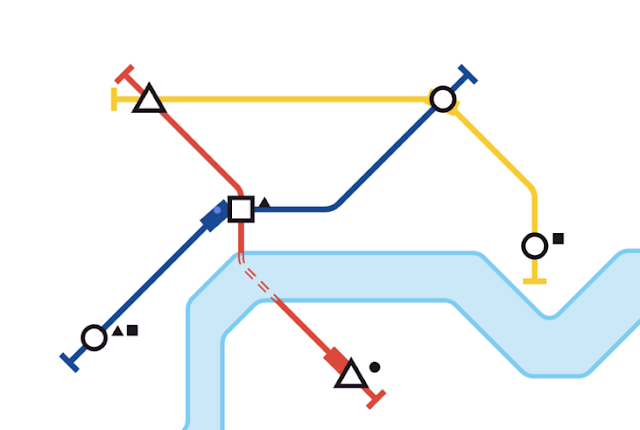 Every so often you’ll come across a game that simply clicks. There might be nothing mind-blowing about it, but it will be simple, clean, and, most of all, entertaining. Mini Metro is one such game to me.

It bills itself as a “simulation” game, setting you the task of building up and managing a train network, but it’s not really. Mini Metro is more skin to a casual time management experience, where you have to use limited resources (in terms of train lines and carriages) to juggle the rapidly expanding network, and the increased number of passengers that the network brings. Leave too many passengers waiting on one platform too long and it’s game over.

Stations are symbolised on the map as “shapes” (star, triangle, circle, square, etc), and each passenger has a desire to get to a specific station in order to complete their trip. If they’re on a station with a line that takes them directly to their desired station, then it’s all good. However, if they’re on a station that doesn’t take them directly to their goal, they’ll travel to a connection station so they can swap lines and get to where they want to go. It’s a good idea to try and get as many lines to go to as many different stations as possible, otherwise your network fills with passengers changing trains and not getting to where they need to efficiently. But on the other hand, if a single train line is too long, then trains take too long to travel it, and that in turn means that people build up on the platforms.

So the goal is to balance these conflicting challenges in such a way that the train network covers as much as possible as efficiently as possible. It’s not as easy as it sounds. Train tracks can’t cross, meaning you need to make good use of the train stations to divert track lines. There’s also a very limited number of tunnels or bridges, meaning that only a couple of track lines can pass any river or body of water. And you’re limited in how many carriages you can have on the tracks, meaning you need to carefully plan for where the heaviest congestion will be.

Impressively, there are a wide number of cities to play on, and each one has a very different feel to it. Japan’s Osaka, for example, gives you access to a limited few shinkansen “bullet trains” which need to be carefully placed to account for the longer distance that it takes to get to some stations. Australia’s Melbourne, meanwhile, has you building a tram network, which means trains move more slowly, and you’ll need to account for that. China’s Hong Kong builds up incredibly quickly, meaning you’ll need to think much more quickly on your feet. In addition to the very different mechanics and environment that mark each city, there’s also online leaderboards, daily challenges, and an extreme difficulty mode for extra replay value. There’s even the ability to export your efforts to a .gif image format, which allows you to share your efforts online, and show friends how you were able to build up your network.

As abstract as this all is – meaning you don’t need to manage finances, positioning of stations, and so on – the end result is that you end up with a train network that does indeed look like real-world train networks. This is reinforced by the aesthetics, which are truly gorgeous in their minimalism. I love the look of train network maps – I actually have a framed map of Tokyo’s network hanging on a wall. As such, I love the look of Mini Metro, and how quickly the network of tracks builds up. 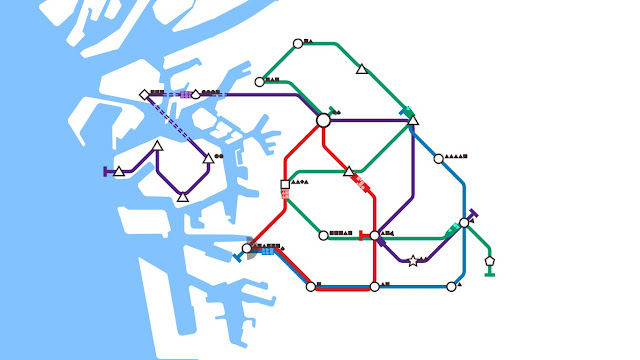 There’s actually not that much more to the game; as I mentioned, it’s really quite simple in execution. But it is tightly balanced, elegant, and nearly perfect in execution. I would rather have this on iPad, 3DS or Vita, as I do believe it’s the perfect way to get through a real train trip, but regardless, it is a brilliant example of minimalist design.

Do you enjoy indie games?