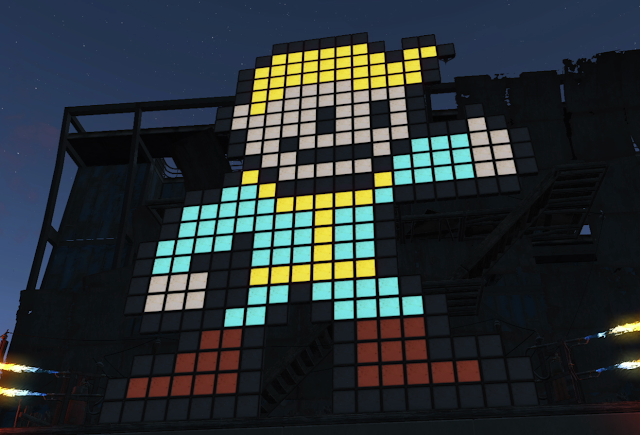 There are a ridiculous number of things to see and do in Fallout 4, and while the game doesn’t represent the same leap forward that two to three was for the series, the adventure is still absolutely worth your while. Dozens of hours can easily be lost in exploration as we get a glimpse into a post-apocalyptic version of Boston that strangely beautiful and interesting.

Related reading: Also out on the Fallout front this year was Fallout Shelter on mobile. Lindsay’s full review.

Having been a fan of the heavily strategic, turn-based early Fallout titles, I was actually very reluctant to engage in the more action oriented Fallout 3 when it released. I was impressed with the uptick in visuals, but I had my doubts that Fallout 3 would prove a worthy successor to the prior couple of RPG titles. Then I gave it a chance, and I was completely sold – to such an extent that I bought all of the DLC and literally did everything there was to do when I sunk at least a hundred hours into it for Xbox 360.

Now comes Fallout 4, and I am better prepared for the new series direction. On the one hand, this feels like a natural progression for the series. It builds off of the infrastructure used in Fallout 3 and in New Vegas, but those looking for the tremendous leap found in going from Fallout 2 to Fallout 3 will undoubtedly be disappointed. The visuals are certainly improved, with hauntingly beautiful landscapes, dilapidated buildings and creepy underground passages galore. While character models also benefit from new hardware, the animations are still a bit herky-jerky at times, diminishing the visual polish. 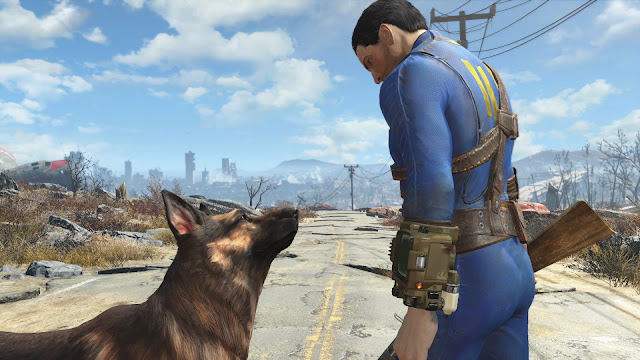 It is also worth mentioning that the traditional Bethesda bugs certainly show up here. A patch has helped to clean some of those up, but there are still plenty of issues. They range from the mundane such as a globe I set on a desk sinking through it and only being half-visible on return to my house. Sometimes dialogue gets into a weird space where my character and the one I am talking with are talking over each other and what was being said on screen bore no resemblance to the text being displayed. There are odd moments with framerate issues, too, that absolutely do let the game down in places. It is almost something of a running industry joke, but I encountered fewer bugs than usual (no backwards flying dragons such as in Skyrim, for example) and none of them were game breaking. Given the scope of the world, I would expect issues to arise, and they certainly did again in Fallout 4, but I spent dozens of hours and never encountered anything game breaking.

Oh what a world it is. When things start, you are given ownership over two characters – a husband and a wife. You can customise both of them however you like, and then choose which is going to be your primary character. Events begin mundanely enough, with the happy couple and their child as they go about their daily routine while the game teaches newcomers some interaction basics. Before long however, the scene moves from serene to one of panic as nuclear weapons are inward bound and your family makes haste for a fallout shelter. That’s when the game starts proper.

In Fallout 3 you are a baby who grows up in the fallout shelter, knowing only what you are taught about the outside world. Here you play the role of a person who is very much out of touch and time, having been cryogenically frozen for many years. As my character emerged, having being worked up, society was doing its best to piece itself back together, and the place is very different from the surface world that they remember. In Fallout 3, our protagonist was wide eyed and experiencing everything for the first time. In that game I was seeing the devastation of a world my character had only heard about. In Fallout 4 the theme of what the world has lost was more poignant, because our protagonist knew the world from before the fallout and was trying to reconcile that against this new post-apocalyptic society. Thematically speaking, this creates a completely different narrative that I found far more relatable; after all, now we have a point of reference that we can associate with our own lives. 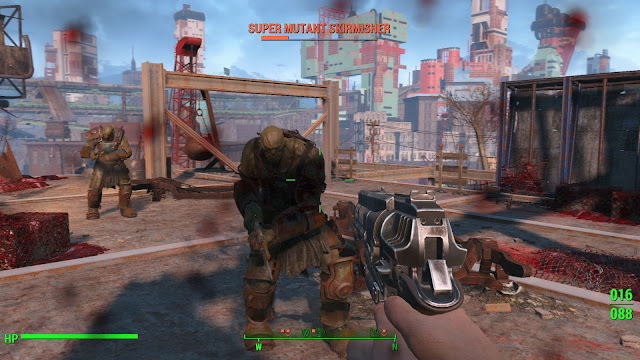 So what else is new in Fallout 4? The primary gameplay is still very similar, relying heavily on the framework of Fallout 3. You can play the game from a first or third person perspective, and like Mass Effect it is as much a shooter as an RPG. The shooting and running mechanics work. They are not as smooth or polished as the latest Halo or Call of Duty offerings, but there is a different kind of depth being offered in Fallout 4. The effects of attacks are still determined  a series of rolled virtual dice behind the scenes, with all sorts of variables such as skills and other modifiers that get taken into account. You can still slow down time to make use of the VATS system for more strategic aiming, so you can attempt to leverage specific shots on an enemy. So for example, you can go for the head of an enemy for extra damage, though there is a lower chance of that hitting, and some enemies protect their heads, forcing you to pick a different target.

Travel will be familiar to those who have spent time in the Wastelands of Fallout 3 or wandered about The Elder Scrolls games. Mapping and fast travel become a big part of the equation, as do encounters with friendly and enemy characters, harvesting of natural resources and of course the gathering of loot. Legendary enemies are encountered from time to time, providing a steeper challenge but also better gear for those gamers who enjoy loot as a primary mechanic.

If your entire focus is flying through the primary storyline, Fallout 4 will not prove to be a very lengthy game. Like many other open world and RPG games, side quests do a great deal to flavour the world and provide extra hours of gameplay. Some discoveries are random and amusing by nature. I found an old scrap yard with a disabled robot. I also found a nearby terminal and figured out how to get said robot online. Then he just stands there, warning you that the area could be dangerous. I thought about attacking him, but frankly, it looked like he would wreck me pretty quickly. I went back to the terminal and… oh, a self-destruct option. Handy! And of course after his demise, I had access to some handy cores for my power armour. 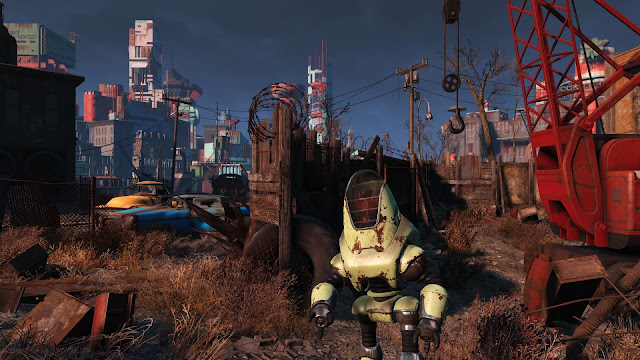 Other quests are more generic, but they still lend some texture to the world that Bethesda has created. Finding a farm with a mother and father who are grieving over their daughter’s demise was good writing appropriate for the scenario. Running off to a nearby tower to retrieve her locket from a gang of raiders was every bit the overly familiar fetch quest you would think it was going to be. There is nothing inherently wrong with the quests, but games like The Witcher 3 have started to move us away from arbitrary fetch quests, and it’s something Bethesda should note for the inevitable Elder Scrolls VI.

One area where Fallout 4 really entertained me was in its world building or settlement management. Early on your character has a chance to work with a settlement, and if you choose to help them, you can really claim a stake in how they develop. The settlement can serve as a resource – a place where shops can become established, work benches can be built and more quests can be found. You can tear down old buildings and use the scrap to build all new ones. I actually took my character’s original home and added onto it, expanding it by nearly half with new rooms that opened out into a back porch, with a grill and a Nuka Cola machine. In a real apocalypse, I hope to do so well for myself.

These customisations will appeal to the same people (like me) who spend entirely too much time simply living in a world. They also play up to the very Beckettian-style absurdism of plays like Waiting for Godot. One thing that Bethesda games have always done is create a perception of a large living world… that proceeds to do nothing with it if the player lazes about doing nothing. As a running commentary on character agency Vs. player agency, it’s a fascinating theme to think around. And on a more practical note I became even more invested in the settlement and the people in it, because I had a sense of ownership over how it was being developed. 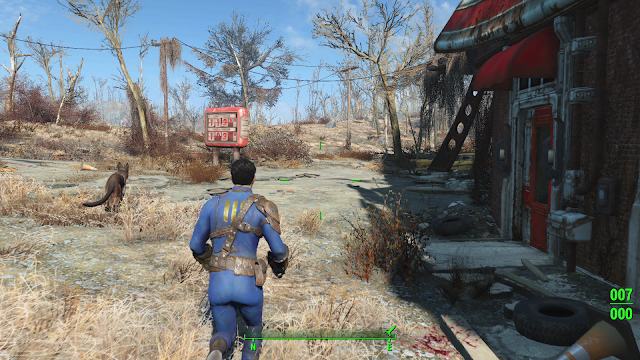 Another area of change is in how weapons are handled. I really disliked the old durability system before. Now that is done away with in favour of a modification system. Want to turn your pistol into a long barrelled nightmare for your enemies? Just find the parts to do it. Ditto turning brass knuckles into a Wolverine like set of knuckle blades. The weapon upgrades work in harmony with the levelling system to create a solid sense of progression over time. Fallout 4 will do its absolute best to kill you in a variety of ways (molerat strapped with explosives sent running straight at me? Check) – but over time I was better equipped to handle those challenges.

Fallout 4 still has its issues, especially around glitches. Bethesda will probably never learn there (and, given sales and hype behind the game, Bethesda knows it doesn’t actually need to learn). However, the game itself works by building a closer connection between player and narrative, and a settlement system that gives players a genuine excuse simply to live within a world.

So, you gonna Fallout 4?

A new Nintendo Direct will stream on November 12

On why the cultural imperialism in games needs to stop