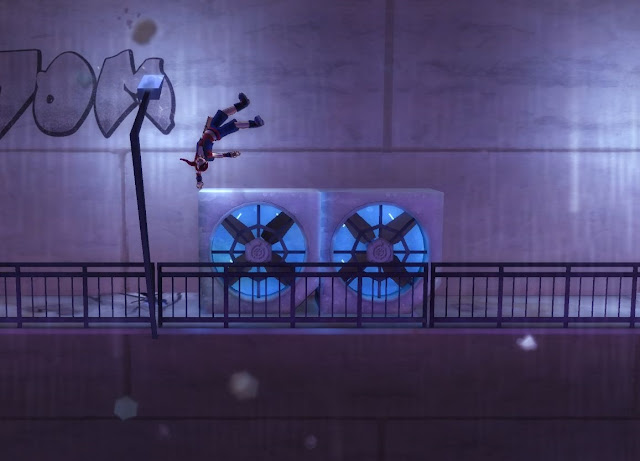 I enjoyed listening to the developer commentary on Ninja Pizza Girl much more than I should have. The whole project seems like an ordinary Australian family got together in the kitchen one day to make some pizzas, somehow decided to make a game instead and emerged two years later battered and bruised but with something they’re really proud of. And they named themselves Disparity Games somewhere along the way.

Disparity’s first title, Ninja Pizza Girl, is a lot of things – it’s a speedrun-friendly action platformer, a representation of a capitalist sci-fi future and a humanistic story about growing up as a teenage girl and dealing with struggles like bullies and self-worth issues. If you’ll excuse the cheesy metaphor (and the pun as well), it’s like Disparity have started with solid platforming mechanics as a bread base to add some very creative narrative toppings. 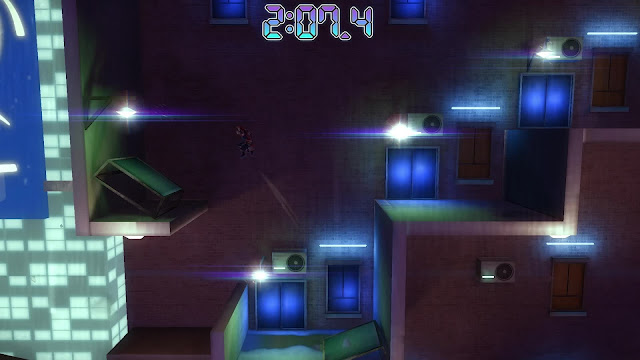 The overall gameplay of Ninja Pizza Girl is that of a time-attack platformer. You aim to get from start to finish before a pizza you’re tasked with delivering gets cold. The game is set in the not so distant future where the roads are a permanent traffic jam, so the only efficient way to deliver pizza is by ninjas who parkour across rooftops. The protagonist, Gemma, is the daughter of a little home business and her path will often be impeded by rival ninjas from the evil MegaCo Pizza conglomerate who own a near monopoly on the business. It’s fast running, high flying, neon lit, evil ninja dodging insanity which is both easy to understand and immediately engaging.

The experience revolves around the concept of flow, and Disparity Games quite brilliantly plays with this concept throughout the mechanics. Levels are fairly linear affairs with not much room for exploration, and are mostly built around the philosophy of surmounting immediate obstacles. Said obstacles all have to do with stopping your forward momentum in some way – whether you take a fall from too great a height or get pushed to the ground by an enemy ninja, the act of stopping is designed to be painful and jarring (though not violent. This is not a violent game in any sense). This is further reinforced by the graphics, which become brighter as you’re doing better, as well as the soundtrack, which starts with atmospheric techno and amps up to harder dance music when you’re doing well.

Ninja Pizza Girl’s narrative deals with the struggles of growing up, finding one’s unique voice in the world and dealing with issues of self worth, and it’s remarkable how rarely this story gets told in the modern gaming scene. Each level has a little introduction and epilogue detailing Gemma’s relationship with her family as well as the customers she delivers to, and the writing is punchy enough that the characters become fully formed quite easily. I wasn’t the biggest fan of the art style in these sequences, but I’ll admit they did the job. The narrative ticks all the boxes for good morals, high character diversity and engaging plot – on story alone this is an easy game to recommend. 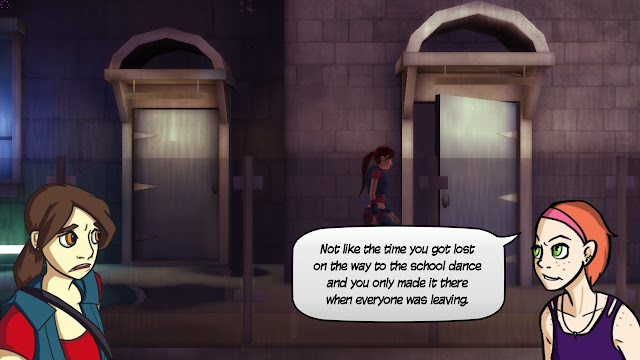 The game is divided into six chapter blocks, each focusing on a particular theme. I particularly enjoyed how the finale for each stage changes the game’s goals and mechanics a little bit to convey the narrative better – for example an early stage has you making your run as exciting as possible to inspire confidence in a girl suffering from social anxiety and agoraphobia. It certainly left me wanting more, and it was an itch that speedrunning and collectibles couldn’t quite scratch. Disparity Games have also added a robust range of difficulty options so players wanting to experience the story can do so at their own leisure. I do highly recommend trying the game on max difficulty though, if for no other reason than to experience what helplessness can feel like.

There’s so much to like about Ninja Pizza Girl. We so rarely get to see glimpses into the team behind a game nowadays, but Ninja Pizza Girl just exudes vibrancy from all its edges that it’s impossible not to be charmed by the wonderful people at Disparity Games. This is a team which can’t get through thirty seconds of commentary without bursting into laughter, and it’s very refreshing to see their upbeat approach to game design. Of course, this is an indie project and the content’s a little on the short side, but when Ninja Pizza Girl hits its stride it really sings.